I’m often skeptical about “upscale Chinese.” Many of my favorite Chinese restaurants are very reasonably priced, so I have to think twice (or a few times) about spending triple-digits on a Chinese meal.  WP24 is Wolfgang Puck’s latest foray into Chinese cuisine, located on the 24th floor of the new Ritz Carlton in downtown LA. I had been to his now-legendary Chinois on Main maybe seven years ago, and I found it somewhat unimpressive.  However, reviews for WP24 have been very strong, and I’ve had an urge to try it. 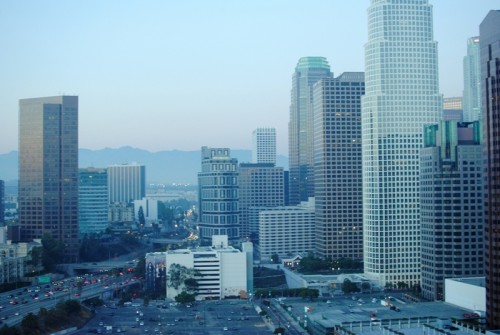 The restaurant offers some of the best views of downtown LA. Unfortunately, the skies were really cloudy on this day, but you get the picture.

Two tasting menus are offered; one at $130 and a “Dynasty Menu” at $160. An a la carte menu is an option; however, since there were only two of us, we thought the tasting menu would be the best way to sample what the kitchen has to offer. This tasting menu was a ton of food – the waiter even admitted that it was too much, and the “Dynasty Menu,” at two more savory courses, was just plain ill-advised.

We first started with a number of amuse bouche-like small bites. 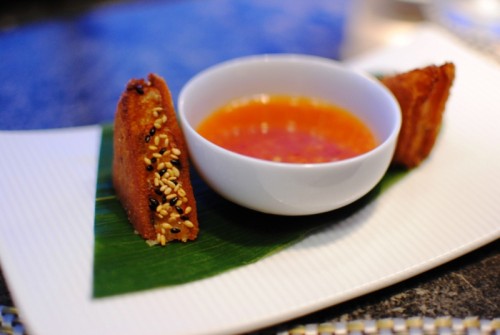 This was delicious, and reminded me of these shrimp toasts I eat every Thanksgiving.  The crispy toast and moist shrimp make for a great bite, with the chili sauce adding a subtle sweetness and spiciness. 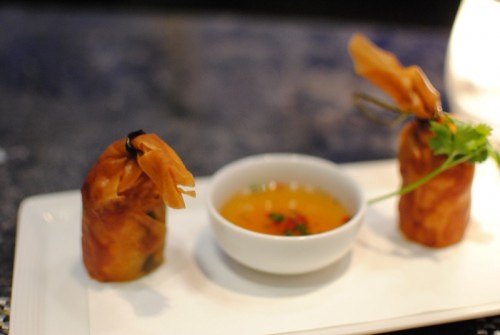 I enjoyed these as well. The rolls were densely packed with the lobster and shrimp, yet it was still very moist. Nicely cooked, the crispy exterior added some great texture. 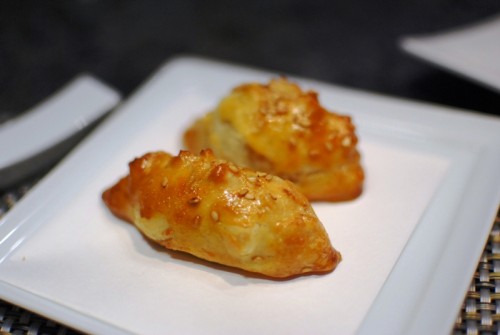 The small bites just kept on coming at this point! These turnovers were flaky, with an interior flavored of mild ginger and curry. 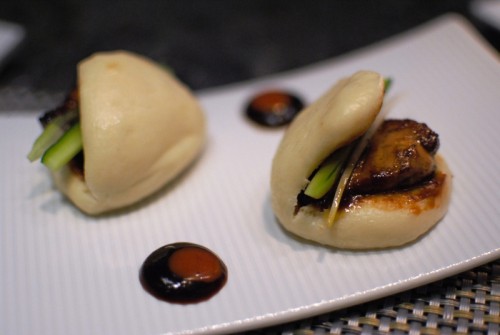 At this point, I was wondering when the “first course” would end – however, I was excited to have them keep coming! I initially had mistaken this for foie gras, but it’s actually “regular” duck liver (without the force feeding). The seared liver was paired with these buns, instead of Peking duck or pork belly – which is typically seen. The foie gras had a nice, melt-in-mouth texture, with the cucumbers adding a fresh crunch to the dish. The hoisin sauce added just a little bit of sweetness to round it out. 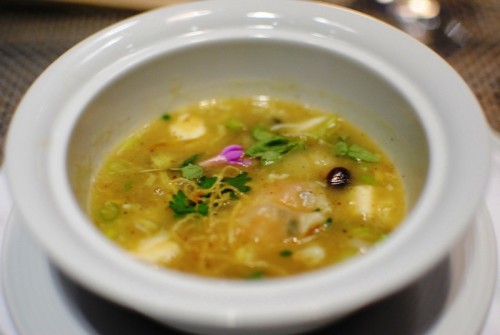 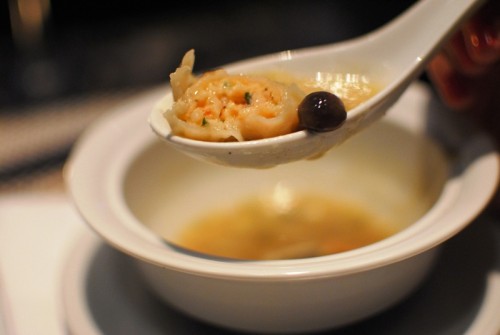 This was a pretty solid soup. A good variation on the traditional hot & sour soup found in Chinese restaurants is heightened with the sweetness of roasted sweet corn and lumps of fresh crab meat. I enjoyed the shrimp wonton as well. 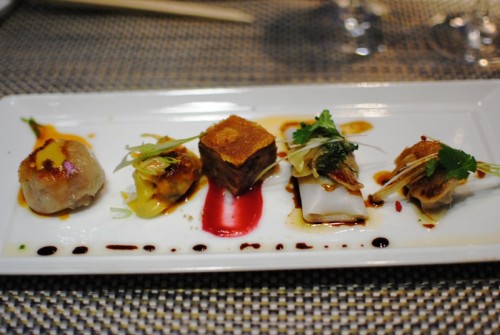 Next we were presented a sampling of dim sum. From left to right, these were a chive crystal dumpling, sichuan dan dan dumpling, crispy suckling pig, beef cheek chow fun, and a potsticker. The chive and shrimp dumpling was perfectly cooked, though I thought the mustard was a little strong for it. The dan dan dumpling was good as well, but the suckling pig was phenomenal. Some of the best roast pork I’ve had in fact. The meat was succulent, moist and exceedingly tender. The skin was very crispy, making this an extraordinary piece to this dish. The “chow fun” (somewhat inappropriately named, as this was more of a “cheung fun”) and potsticker were also very solid renditions. Overall, I was rather impressed, especially with the pork. 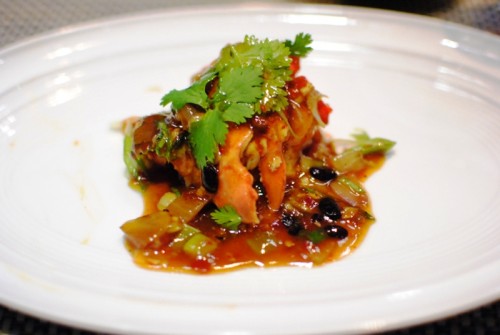 The lobster was presented whole, then carved tableside. The lobster meat was cooked very well, keeping it juicy and succulent. The sauce was not too spicy, and the dish came with a fried rice that was very good. It was a pretty significant portion too, with each person getting a full bowl. 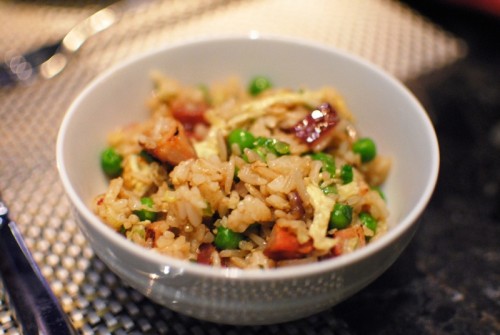 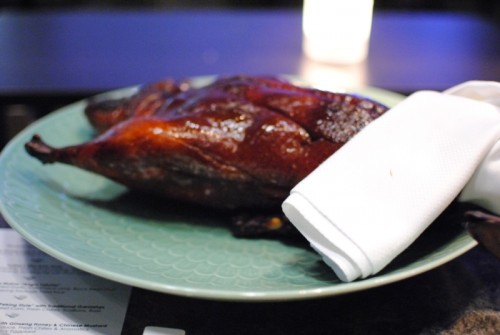 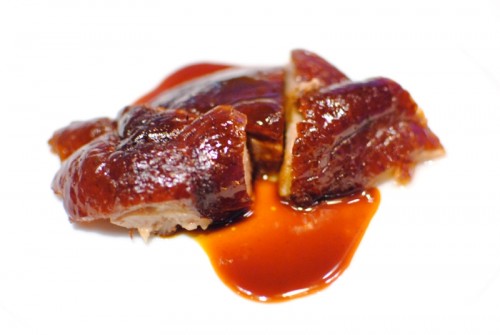 Next was this Peking duck, a classic dish. For the most part, this stuck to the traditional preparation. The duck was brought over whole, and then the breasts were carved. The skin was crispy and the meat perfectly cooked. However, I thought the sauce was rather strong. Good duck is hard to beat, though. 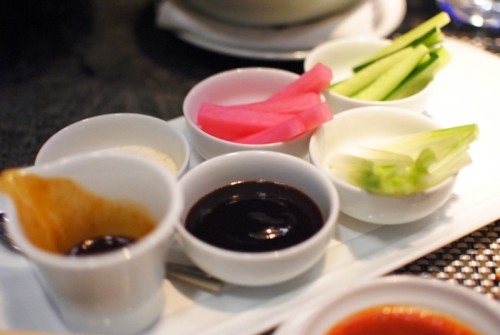 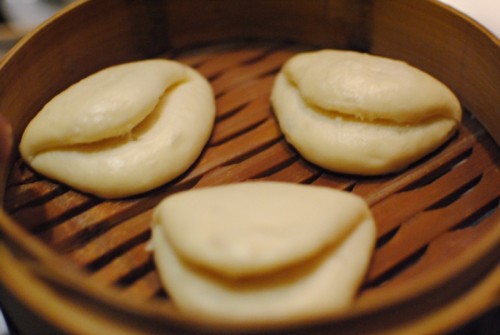 The duck was accompanied by the traditional soft, warm buns, as well as a myriad of options to fill the buns with, including scallions, cucumbers, radish and hoisin sauce. The fresh vegetables were critical in cutting the richness of the duck and sauce. 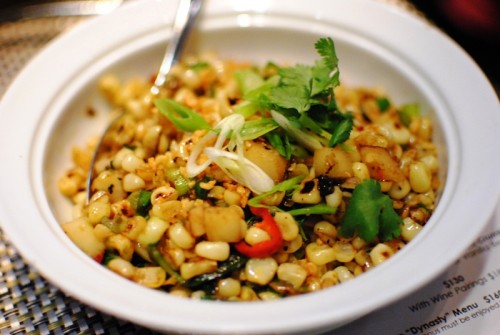 This roasted white corn came with the dish. Excellent.  The corn was very sweet and, combined with some spice from chilies, made for a great side dish. 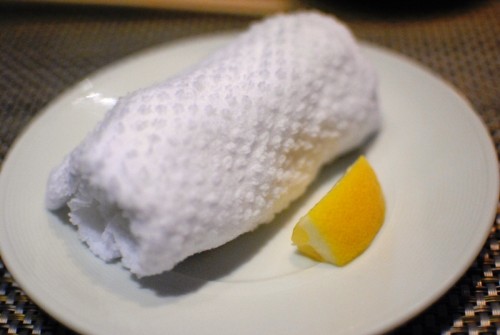 I loved the touch of having a hot towel after this dish! 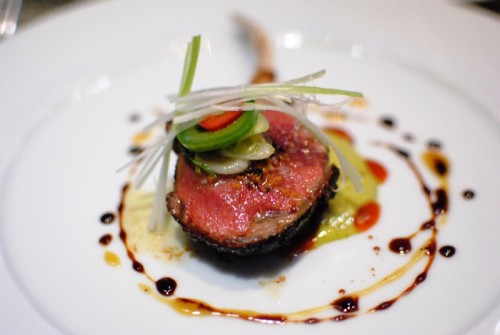 The last savory dish of the meal was this lamb. Tender and flavorful, the meat was cooked perfectly. A good crust formed on the exterior, which was really nice. 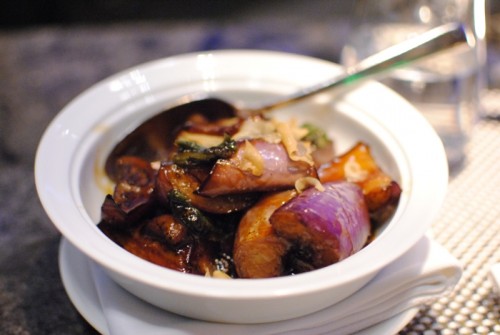 The lamb came with a spicy eggplant dish. I found the eggplant to be cooked well, though fairly flavorless…which I found surprising. 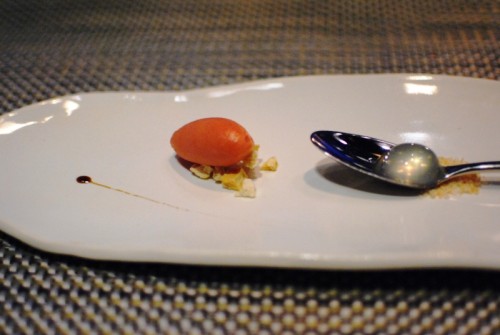 This was the first dessert. Pineapple crisps were at the base of the sorbet, providing a nice textural element to go along with the fresh, strong flavor of the plum sorbet. The coconut “explosion,” with its jelly-like exterior and liquid interior, was refreshing and a great burst of flavor. It reminded me of something I’ve had at the Bazaar and Providence. 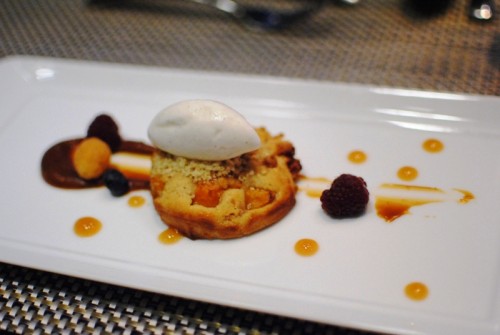 Next was this warm crumble with a really good, strong vanilla ice cream. I loved the warm-cold interplay of this dish, as well as the textures of the crumble with the ice cream.

Lastly, we finished the meal with a plate of roasted almond crisp and almond cookies. 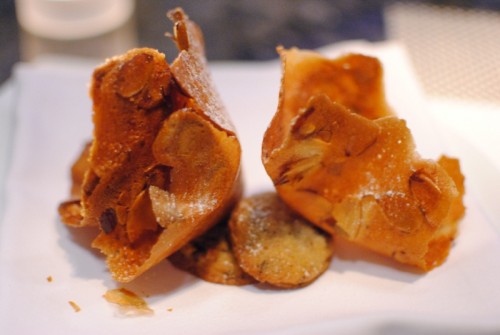 We were pretty full by this point (seriously, it’s a ton of food), but the crisp was quite light and mildly sweet. I would say the same for the cookie – I wouldn’t have minded a bag of these to take home!

I was pretty satisfied, impressed even, by the meal. It was by far the most expensive Chinese meal I have had, but each dish was executed well and, most importantly, was delicious. I wonder if the restaurant would ever consider opening on the weekends for dim sum and small plates, as I think it could be pretty successful in doing that. I would totally come back for the suckling pig! Having said that, the more entree-like dishes were very good as well, and I would come back for that…however, probably only if there was a BlackboardEats-like discount (or if someone else was paying), as the price is definitely steep. I think the restaurant would benefit from doing a lower-priced tasting menu with less food, as this menu was more than enough for me.