I posted a little while ago about The House, where my cousins and I took my grandmother for her birthday. My father also organizes a birthday dinner for her (and my aunt), typically at a little bit more of a “special occasion” restaurant. Prior year examples have included The Dining Room, Cyrus, Murray Circle and Quince.

Masa’s has been in San Francisco for over 25 years; as a pioneer in the early fine dining scene, it helped launch the careers of numerous notable chefs. Past chefs have included Julian Serrano for 14 years (Picasso, Julian Serrano in Las Vegas), Ron Siegel (The Dining Room), and Richard Reddington (Redd, Yountville). Gregory Short, a French Laundry alumnus, currently mans the stoves, maintaining the restaurant’s one Michelin-starred rated food. 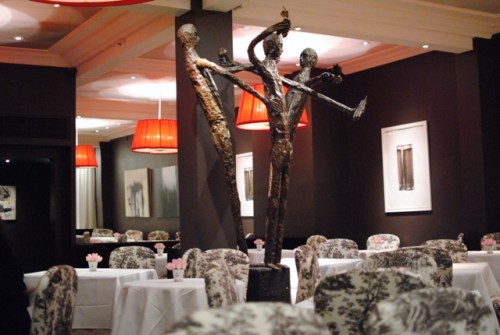 Masa’s is the only restaurant in the city that requires jackets for men, a dress code I tend to greatly dislike. I understand that they’re trying to set the atmosphere, but the food better be damn good.  The main dining room is pretty nice – fresh pink roses are the centerpiece for each table. 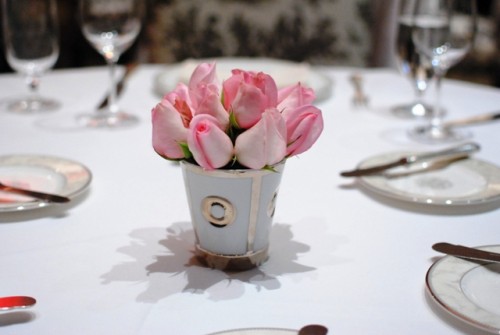 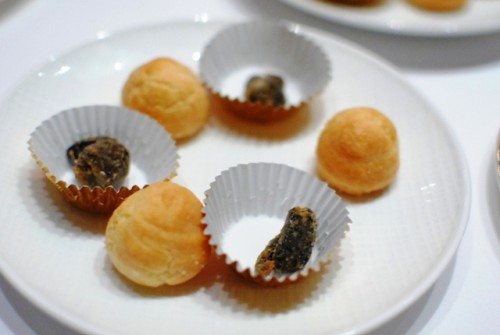 We started with this amuse bouche from the kitchen. The escargot had a crispy texture and tender meat, but there wasn’t a whole lot of flavor.  The gougeres, however, had a great cheesy flavor contained in the light, airy dough. 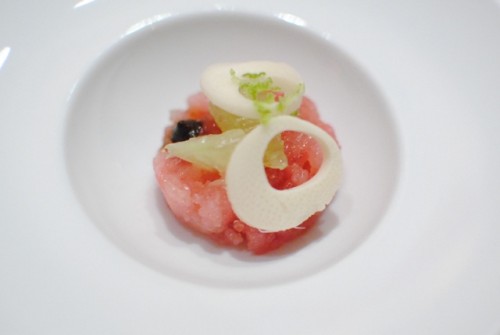 We actually had a second amuse here. I thought the lime wasn’t really ripe, and it overwhelmed the dish with its tartness. I couldn’t taste the tuna at all. 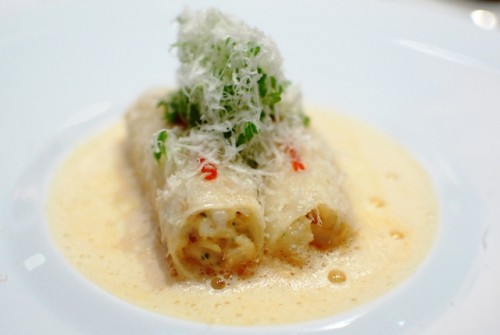 This was kind of an interesting dish. The ‘cannelloni’ wrapper was actually celery root, cooked to an al dente texture. The crab was sweet and tender, though I thought the parmesan wasn’t necessary. 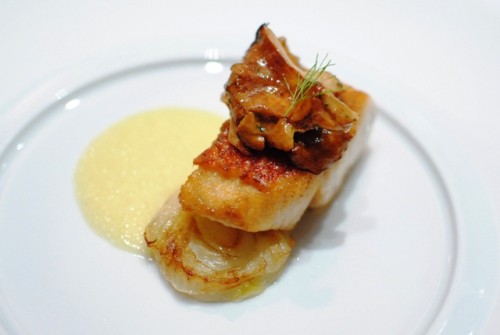 This snapper was first cooked sous vide then seared to a crisp.  It was moist with good flavor, though the chanterrelles were a little bit strong for the dish. I thought the fennel was a good accompaniment though. 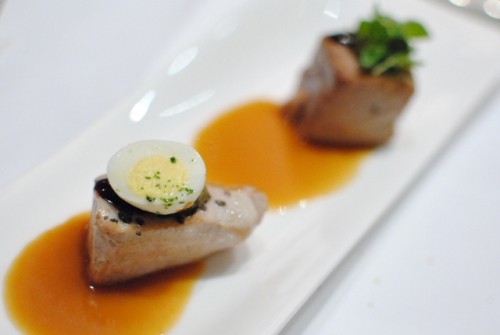 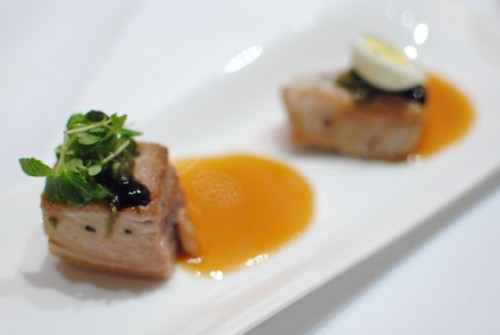 This wasn’t a visually stunning piece of ahi – it almost looks too cooked. I didn’t order this and did not try it.

We supplemented our meal with a couple orders of this special winter dish. 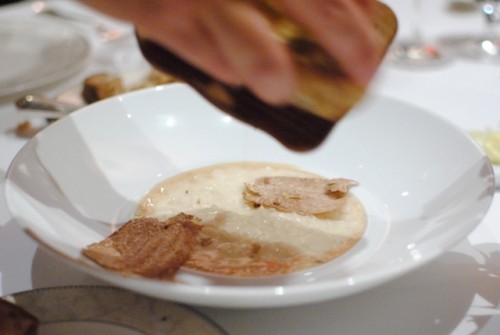 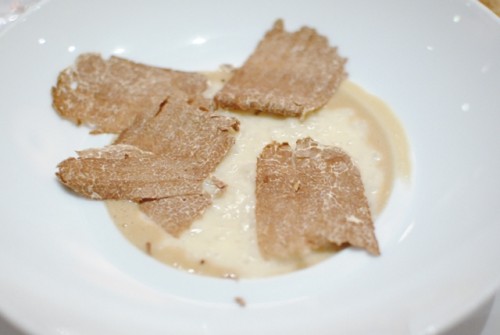 I haven’t had a white truffle risotto since The French Laundry’s amazing version.  This one paled in comparison. The cheese and onions were rather strong in the risotto, which was overly creamy to me. In addition, the white truffles weren’t very apparent in the rich risotto – a big disappointment. 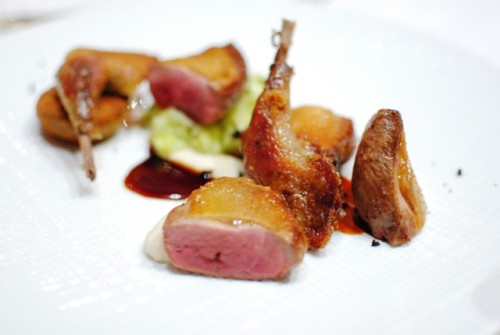 The squab was very tender, moist and quite delicious. If cooked well, it’s really hard to go wrong with squab. 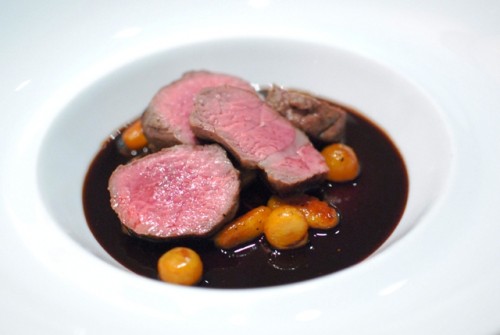 The lamb was tender, flavorful and perfectly cooked. The sauce was very rich and tasty, and I thought the mushrooms and gnocchi both worked well here. 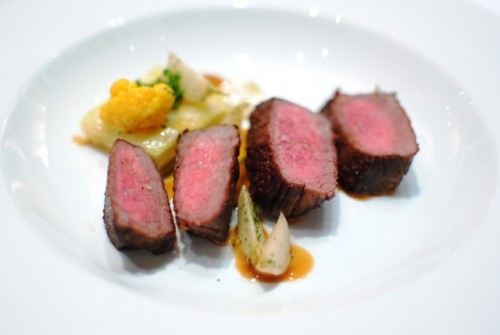 The beef here was surprisingly not too tender. It was fairly unremarkable and I don’t think it was cooked too well. The gray area (which tends to be dry and flavorless) took up too much of the meat and was clearly concentrated on one side (the right of the picture). An inexcusable preparation for such a high quality piece of meat. 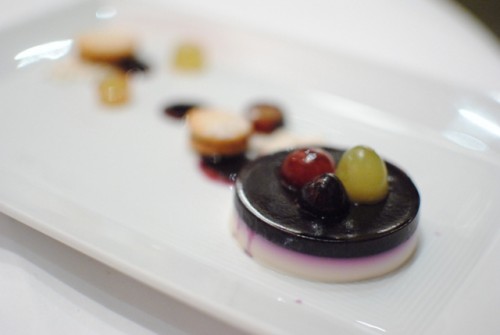 The grape terrine topped a vanilla panna cotta. It was very smooth, and I liked the vanilla-grape combination. 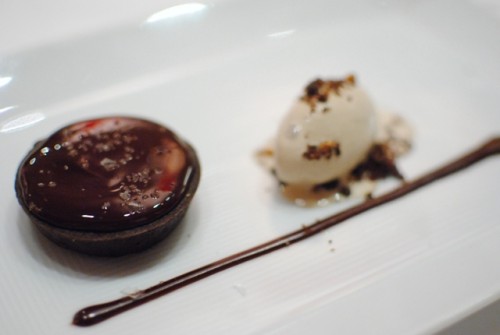 Here we had a chewiness from the caramel, some crunch from walnuts, and decadent, rich chocolate flavor – all in a tart. Hard to go wrong with that. I really enjoyed the earl grey ice cream as well.

Masa’s was fairly disappointing. There were a few very good dishes (lamb, squab) and some pretty good (snapper, crab), but a number of disappointments as well (wagyu and risotto). It was especially disappointing that the risotto wasn’t good because it had so much potential…and were the most expensive things we ordered. I was a little shocked to find the execution of the menu to be so poor – given its Michelin starred status, I thought this would be a strength. I don’t know if this was an off-night, but I likely won’t be back to find out.