Sotto is a new Italian restaurant from Steve Samson and Zach Pollack (Pizzeria Ortica) in the old Test Kitchen space. The Italian fare here includes a variety of dishes from house-baked breads to various seafood and meats to pizzas from a wood-fired oven. And not just any wood-fired oven. Every single brick (and some Vesuvian soil!) of this oven was imported from Naples and hand-assembled in LA by the designer. I’m not sure how it gets more authentic than that! 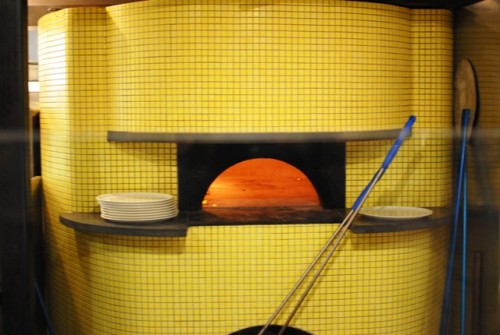 Tonight was the first night open to the public; given that I attended the closing night dinner at Test Kitchen, it was interesting to come full circle and visit on Sotto’s opening night. The floorplan remains pretty similar, though the dining room is much darker.

Julian Cox helms the bar here (fittingly, considering he was the main barman at Test Kitchen), which features a lot of Italian amari-based cocktails. Naturally, we had to try a couple. 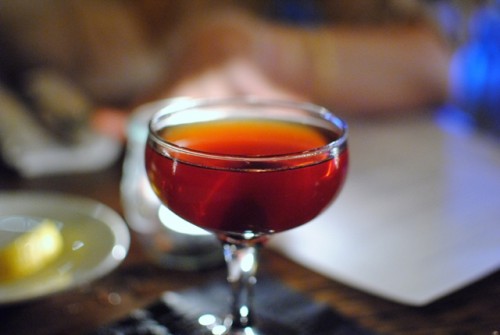 This cocktail exuded a strong bourbon flavor, as well as a somewhat spicy, almost medicinal quality from the Barolo Chinato. 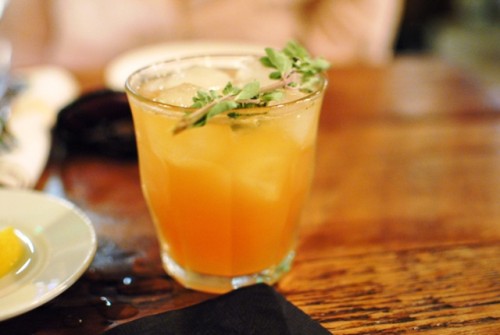 The Typico Italiano was more my style, as I really liked the savory marjoram in tandem with the fresh juices. Crisp and refreshing, I could’ve consumed a ton of this.

This was the first dish to come out, and it was a good one. The meatball was similar in flavor to an Italian sausage, but in a looser-packed texture of a meatball. The arugula, in a lemon vinaigrette, was fantastic, adding some peppery bite to the rich meatballs. 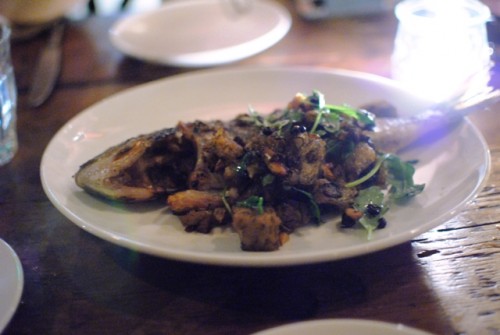 Next we had this whole grilled fish. Now, the dining room is dim…very dim. To carve a whole fish in this lighting was a bit problematic at times, as it was hard to distinguish between flesh and bone.

The grill marks on the skin were very good, giving it a smoky, grill flavor that went well with the fish. The meat was quite good, delicate though not overly moist. I appreciated the lemon slices (packed into the cavity), which lended a little bit of extra flavor. The acquassale (sort of a bread salad) wasn’t really my thing, but it did add a welcome acidity. 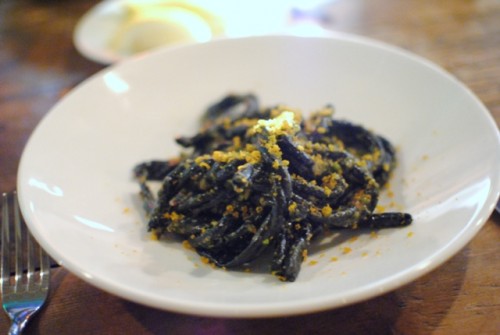 I didn’t like this pasta. I found the squid ink to be overwhelmingly strong, and the pasta to be slightly undercooked. Some of the strands were a perfect al dente, while some had a gritty, crumbly interior.

This pasta was better, starting with thick (though hollow) al dente strands of spaghetti. The clams weren’t as flavorful as I expected, but the zucchini provided a nice sweetness and some extra flavor that I enjoyed.  Perhaps a little heavy-handed on the salt, though. 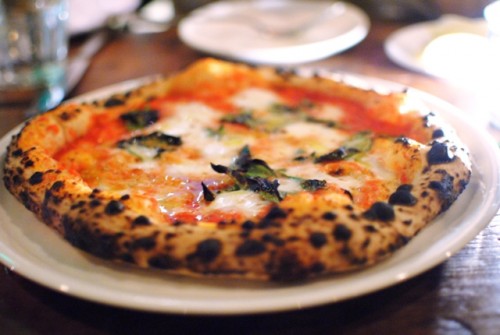 Lastly, what we were both anticipating most (and perhaps the majority of Sotto’s customers), the pizza. The oven, burning at around 900 degrees, cooks a pizza in about a minute to two. Crazy. The first thing I noticed was the nice char uniformly around the crust, as well as on the bottom. The dough was very nice – soft, chewy and just a little bit crispy on the exterior. I thought the tomatoes were slightly too acidic; otherwise, this was a very good pizza. I’d be interested to try some of the other toppings.

My experience at Sotto had some hits and some misses. Given that this was the first day of regular service, I’d like to see if this is smoothed out over time. I’d definitely return to try some more of the pizzas…and seriously, anything else coming out of that oven. I’m not quite sold on the pasta yet. Surprisingly (for an opening night), one aspect of the meal was very strong though – the service.