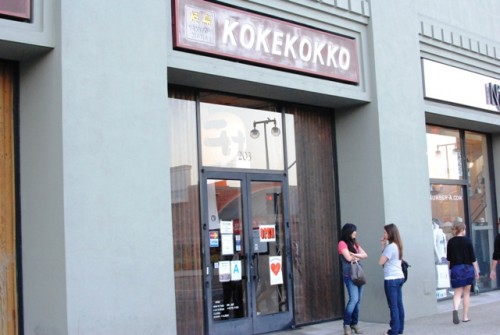 On my last visit to Kokekokko, a friend and I dropped in (both first-timers) for some yakitori (grilled meat, particularly chicken, on skewers), what this restaurant is known for. It turned out to be one of the most memorable dining experiences I’ve had in recent memory. In a bad way. They told us they had run out of some of the items we ordered, but those items were served to customers later. We inquired about other items we’d seen served (off-menu); the server consulted with the head chef/owner, and told us they didn’t have those either. In short, there was a clear preferential treatment for certain customers (ie. regulars). 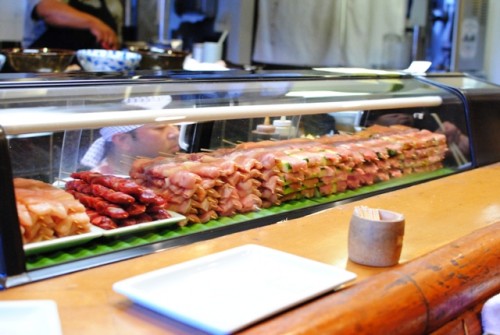 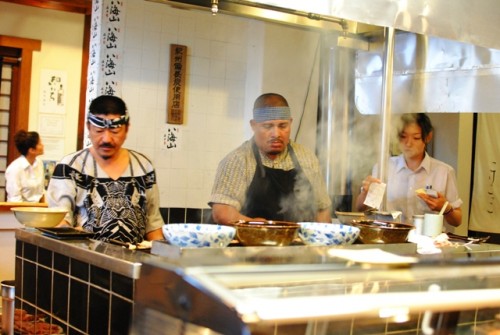 Daniel of effing dericious happens to be a regular customer and extended an invite; this was as good a time as any to make a return and experience the “VIP” version of Kokekokko.

To complement the yakitori, each diner has Japanese mustard (left) and grated ginger/green onion. Some dried, ground chilies are available as well. 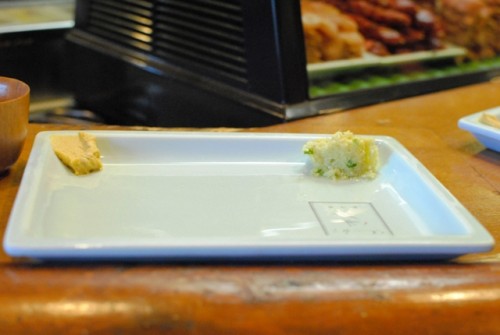 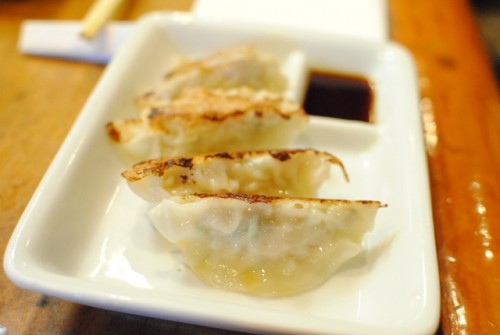 I don’t stumble upon chicken gyoza that often and these looked delicious. Perfectly browned and crisped on one side, the chicken filling was pretty good. I think the more traditional pork filling has more flavor though, but it probably doesn’t get too much better than this with chicken gyoza. 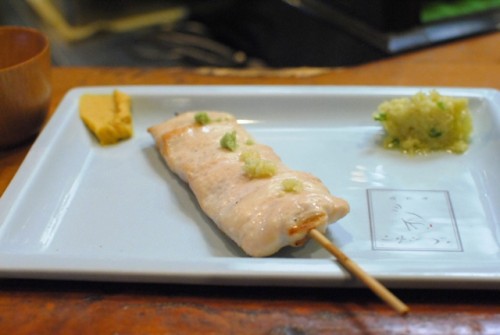 Our first skewer was the most “boring” of the night – chicken breast topped with wasabi and ginger. Supposedly, this can be served medium rare/rare to regulars, but mine was medium well. I’d say it tasted about as expected. 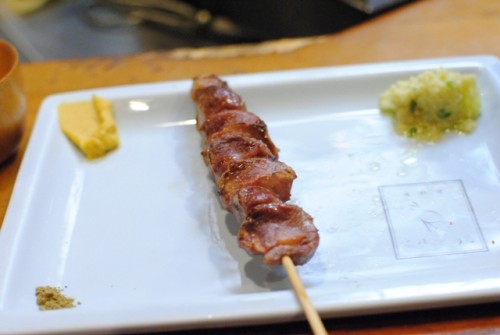 Getting a little more “exotic,” here was gizzard. Served hot, these made for some deliciously chewy bites. As a kid, I enjoyed eating these chicken gizzards and hearts (not as much the liver) whenever they came as part of a whole chicken. 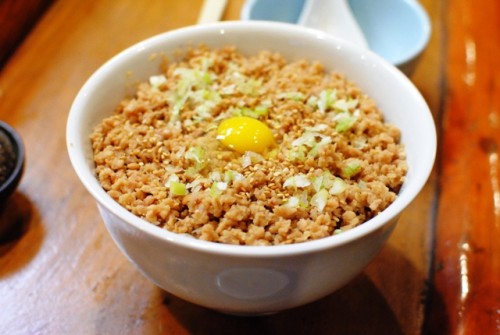 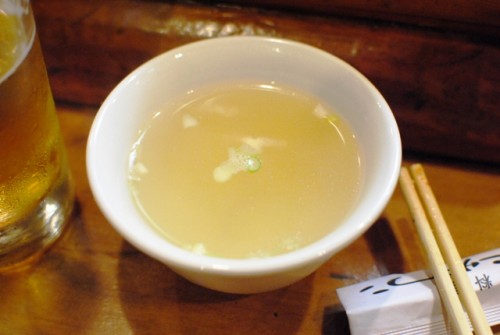 Here was a rice bowl topped with seaweed, ground chicken and a quail egg. Not really much to it here, but it was done well. There was a little bit of sweet-savory going on here, and the rice was very good. Quite filling, though. It came with a satisfying bowl of chicken broth. 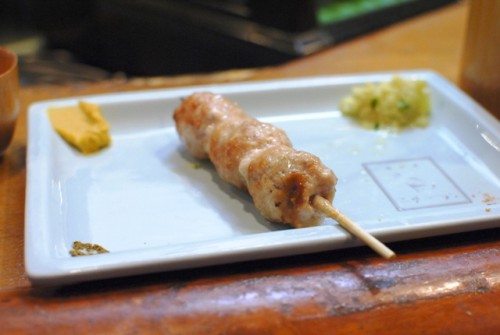 Surprisingly juicy for a chicken meatball, I thought this was quite good. 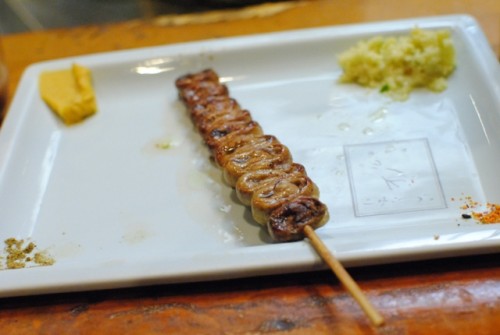 One of my favorites of the evening. Supposedly there are two variations of “special” heart, one covered in sauce. This was not, and I didn’t think it needed anything else. Tender with just a slight chew and really flavorful, this was awesome. 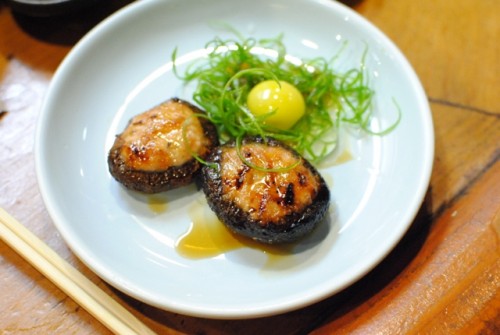 Ground chicken was stuffed into a mushroom cap. I thought this was rather ordinary, though the quail egg and greens were a nice touch. 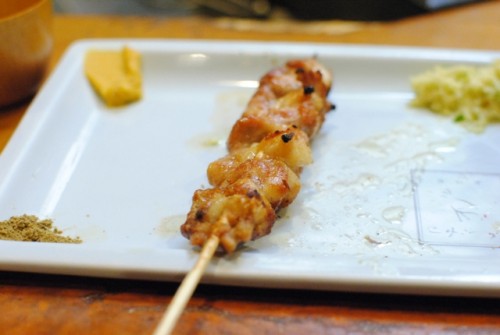 I’m not really sure what part of the chicken this was but I think it was part of the thigh (or nearby). It was a bit chewy for me, but I appreciated the textural change of pace and the flavor was on point. 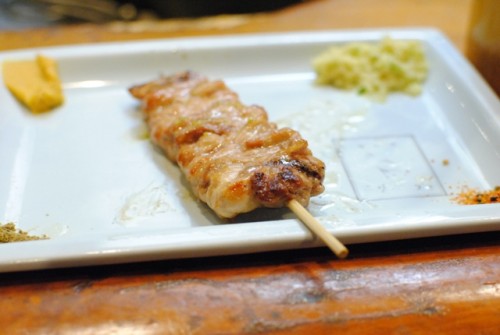 There’s really not much meat on the neck, so I’m not sure how many skewers of this he can serve a night. It really resembled a more tender thigh meat, and for some reason had more of a smoky flavor than the others. 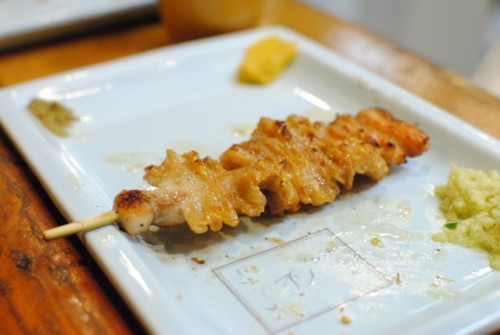 Skin! This was totally a must-try and it did not disappoint. Delightfully crisp on the outside, yet a little bit gelatinous on the inside, this was a lovely play on textures. 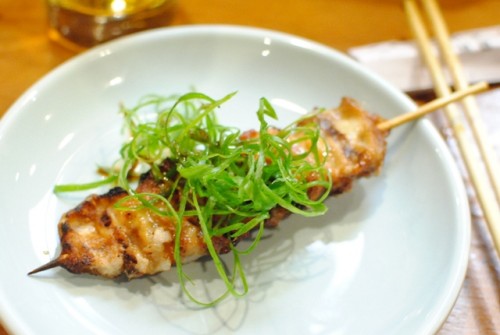 This was another fairly chewy one; sweet and smoky. I’m not really even sure where the meat on the tailbone is. 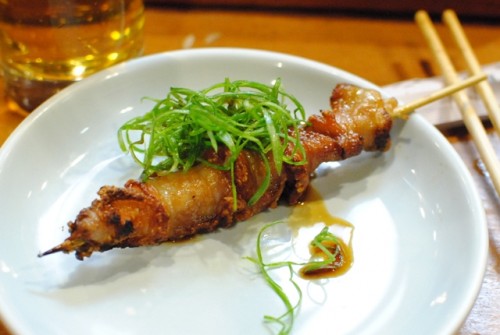 I have no idea what part of the chicken this is. I do know that it was very crunchy and chewy, and slightly spicy. 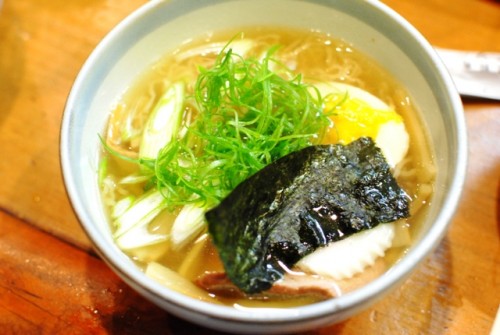 I don’t have chicken broth-based ramen too often, but I love when I do. There’s something about the cleaner, lighter flavor of the broth. It was on full display here – a hearty chicken broth was full of thin noodles, bamboo shoots, scallions, seaweed, duck breast and a delectable egg. Very nice. 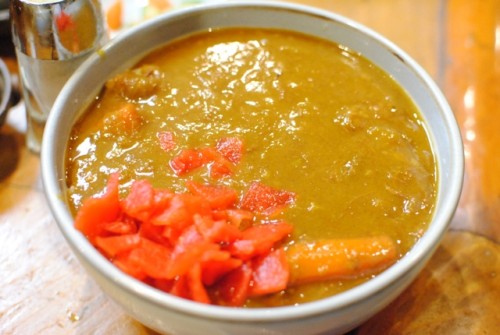 Now this was a treat. Daniel had been here many times but never seen this before. Rich and satisfying, the curry had a deep flavor that really tasted delicious with the rice. It also had shreds of braised chicken – really nice.

This visit to Kokekokko was much better than my last. It’s not for everyone; the strength of the restaurant lies in many of the off-menu items and less common cuts of the chicken. Still, for someone that appreciates yakitori, I don’t think it gets too much better in this city. Just make sure to come with a regular.