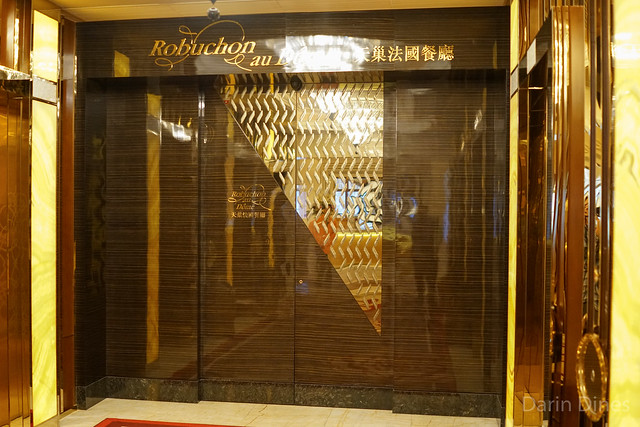 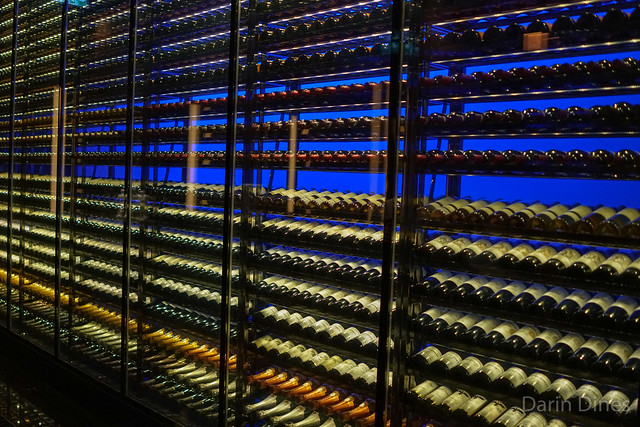 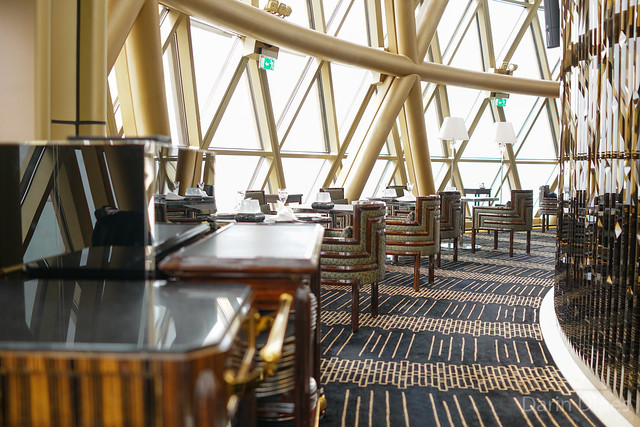 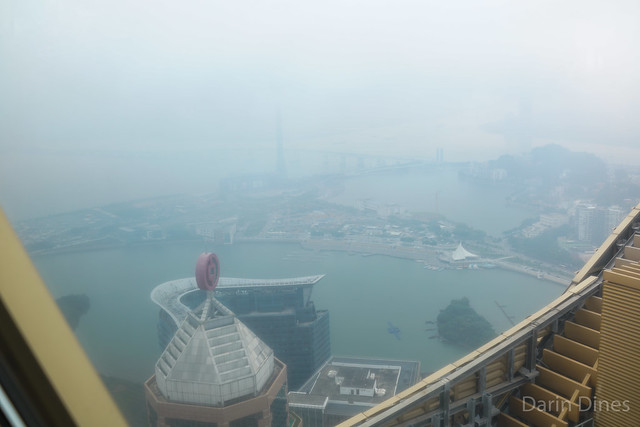 Even with the Robuchon name and the sheer elegance of the place, I found pricing to be very reasonable. The lunch menu started at four courses for $75 (USD), moving up to $99 for six courses. The wine pairing was $65 for four pours. My parents and I all opted for the six course menu.

The bread cart was wheeled around featuring the day’s varieties. We didn’t actually even pick anything from the cart; examples of each variety were served up in a separate basket, warm from the kitchen. 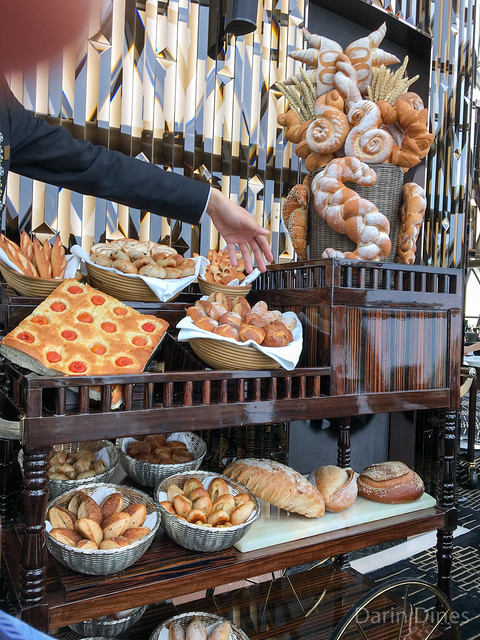 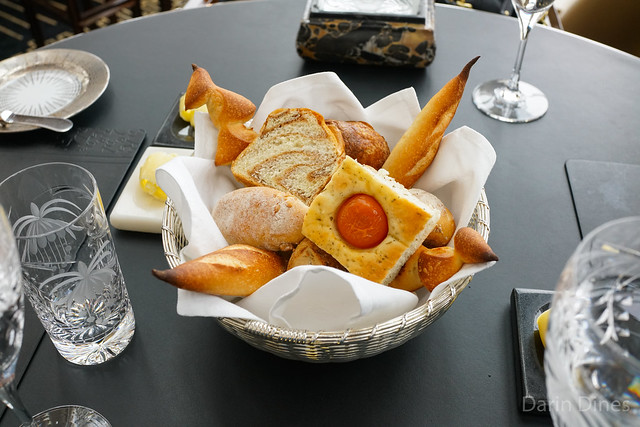 The next cart was one I don’t think I’ve seen before – a butter cart! Two selections from Brittany, one unsalted and one salted, were hand-carved for each diner. 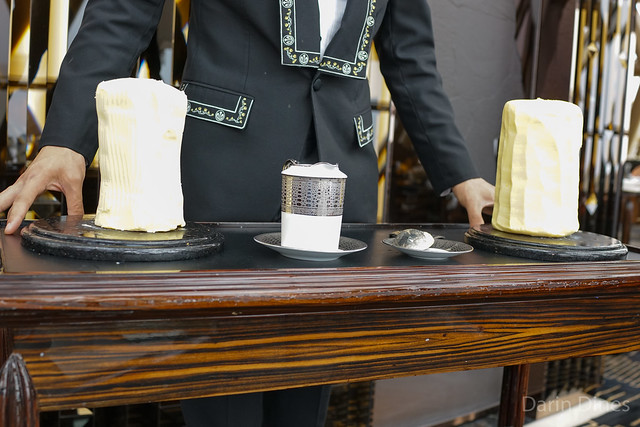 The amuse bouche was the first course. 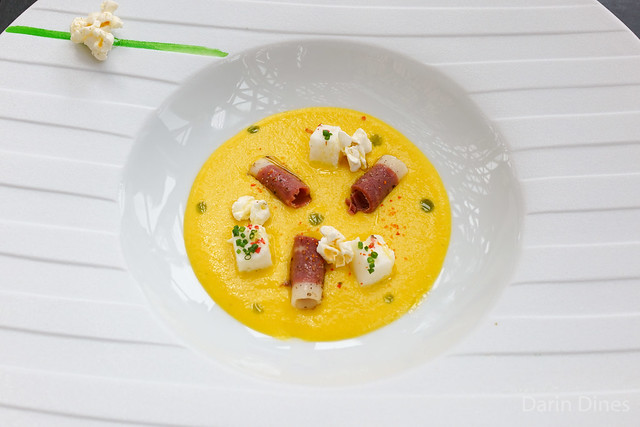 The corn veloute was sweet, accented by a hint of spice and the subtle smokiness of the duck.

We moved into the appetizers. 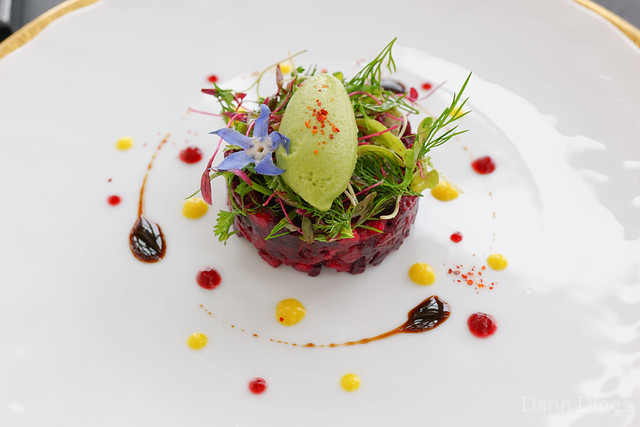 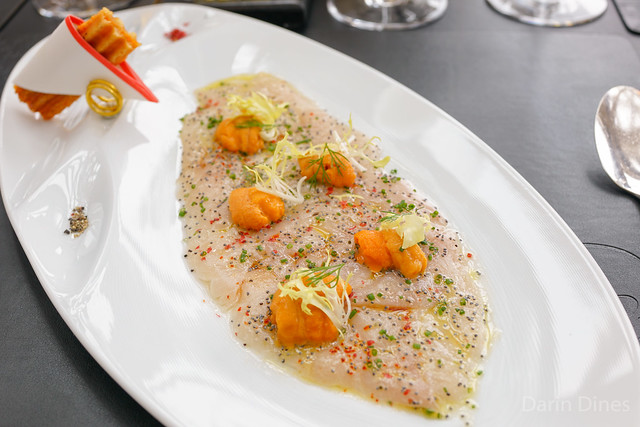 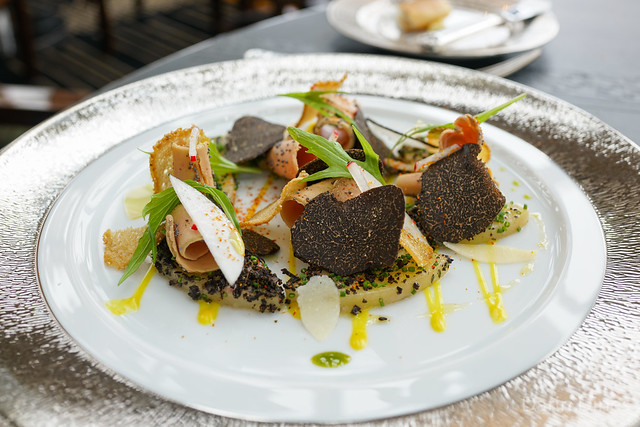 My mom’s beet tartare reminded me of a similar dish at L’Arpege, sweet with crisp, bright flavors. I got the hamachi carpacchio with bursts of sea urchin flavor, while my dad had the haute version of a potato salad with smoked foie and black truffles. Flavors were more subtle than I expected in this dish. 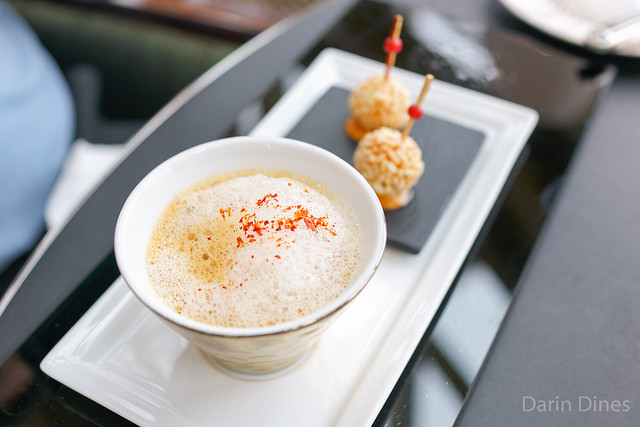 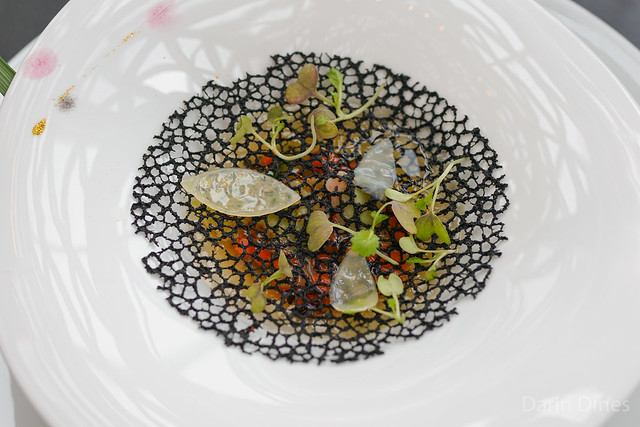 The soup courses were both good. The shellfish bisque was packed with shellfish flavor, while the chicken consomee was a lighter broth-based soup highlighted by mini comte ravioli. My mom likened it to Robuchon’s version of a wonton soup.

We moved into the first of two main courses. 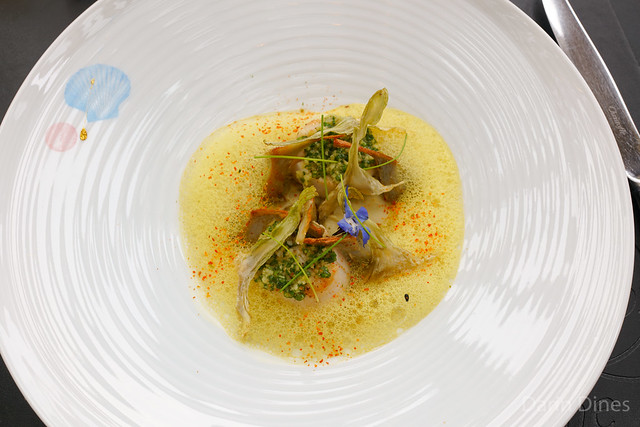 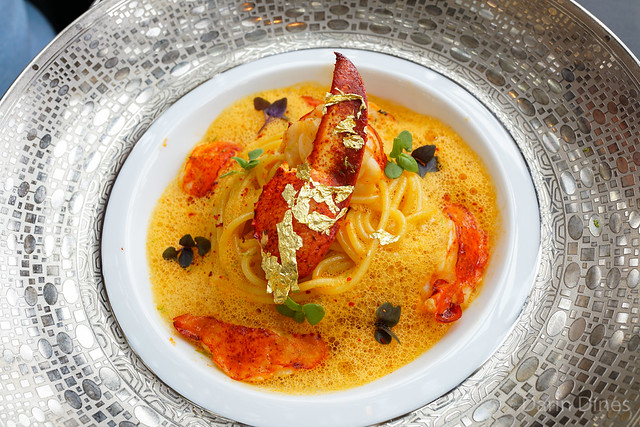 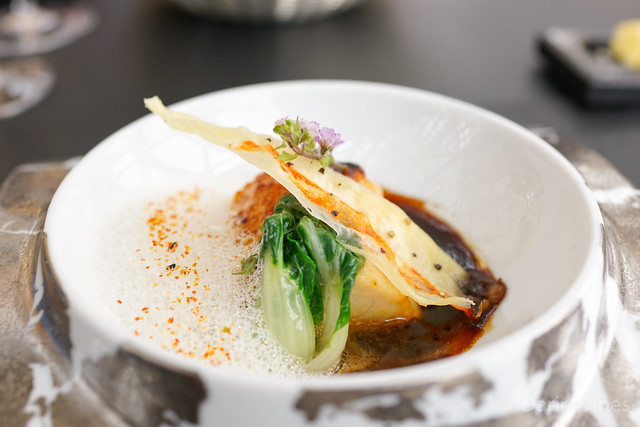 Scallops were seared nicely, complemented by a creamy artichoke puree. My dad’s lobster spaghetti was plated in impressive fashion and was delicious, though we found some of the lobster pieces to be slightly under/overcooked due to their differing sizes. My mom got the black cod featuring bold flavors and a hearty sauce, though found it a bit salty. 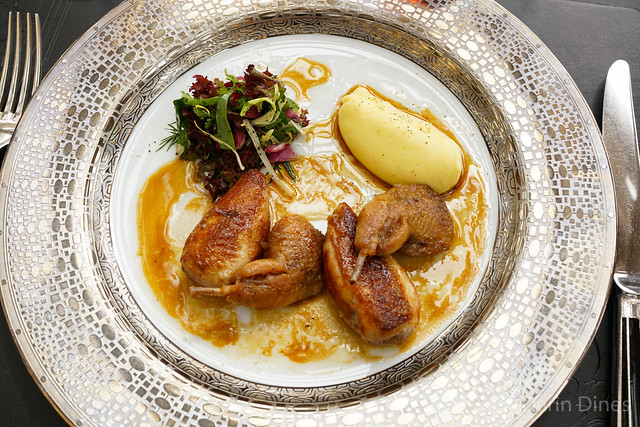 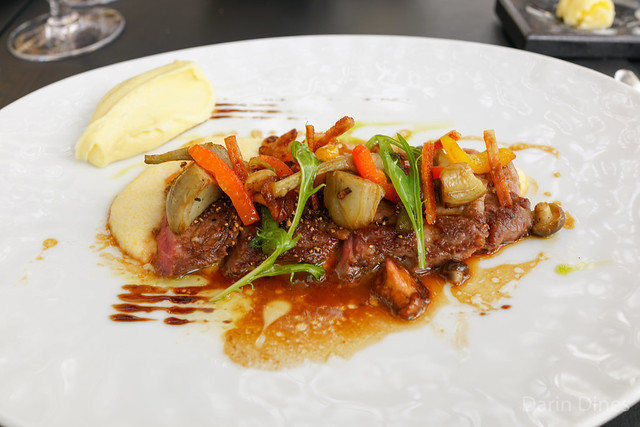 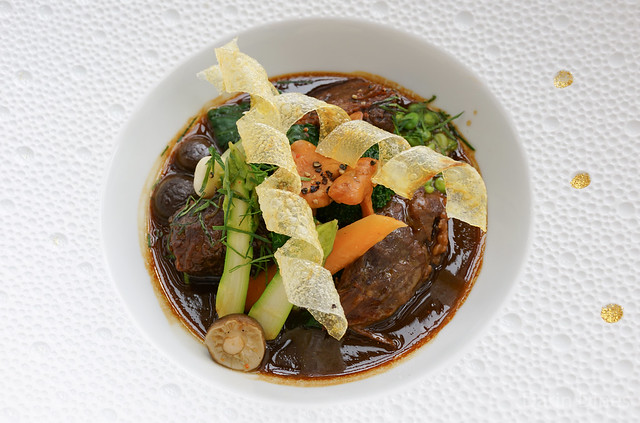 I’ve had this foie-stuffed quail dish around the world and it’s typically one of my favorites. I thought the quail may have been a little overcooked for my liking, though flavors were strong. My mom’s Iberico pork may have been the best of the trio – the pork was delicious, accompanied by an Asian-accented sauce and polenta. My dad’s beef cheek, braised in a red miso sauce, was as rich and hearty as it sounded.

The dessert cart was next to be wheeled around; each diner could pick two to try. 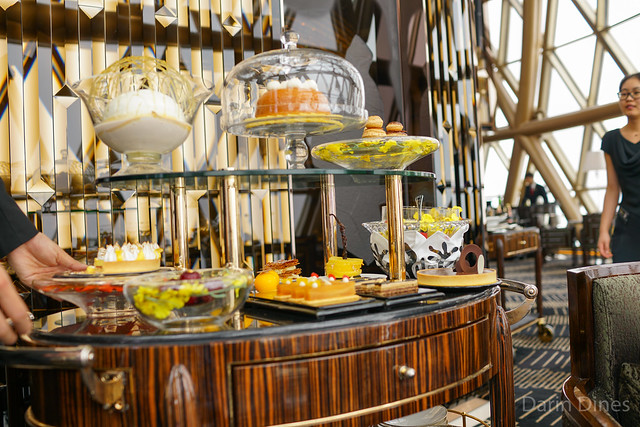 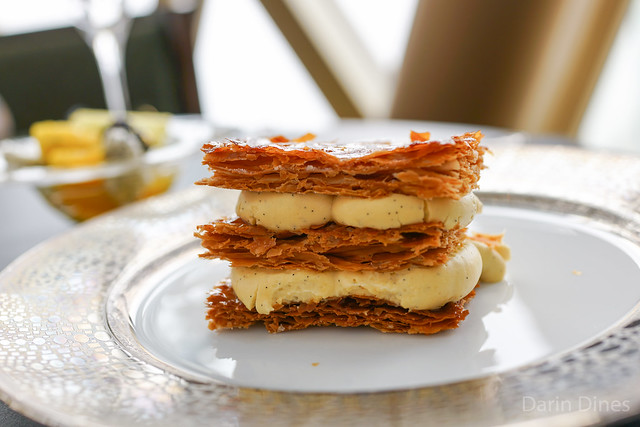 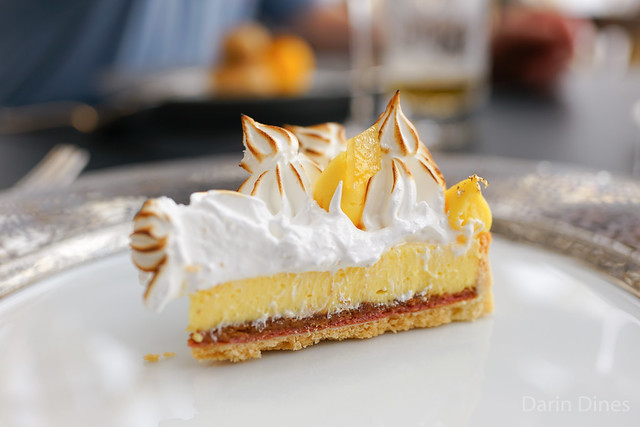 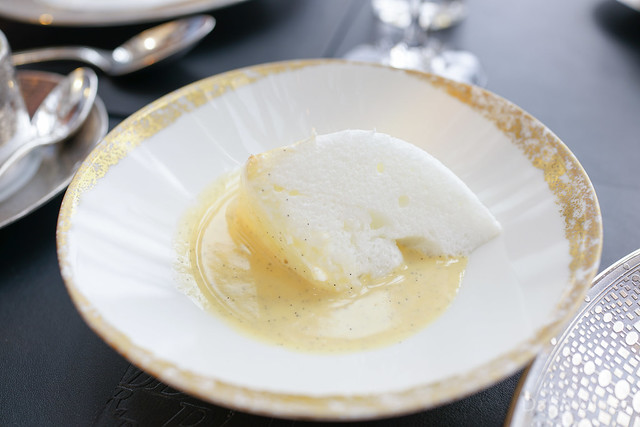 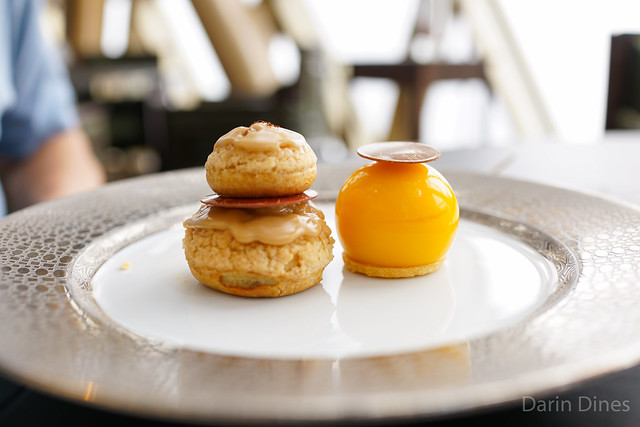 Lastly, the mignardises came around on the cart – we chose a sampling. I really liked the mini Mont Blanc sweets, as well as the warm fresh-from-the-oven madeleines. 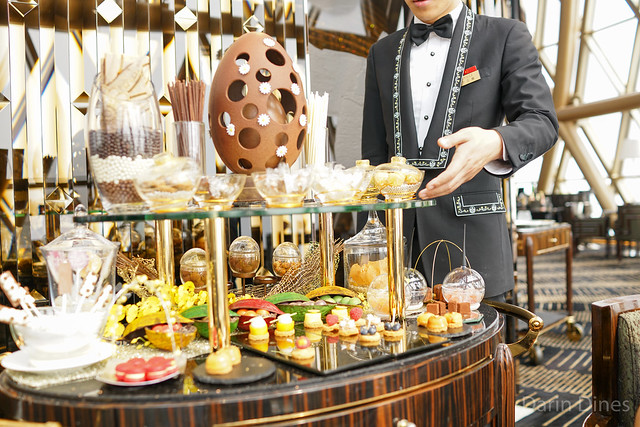 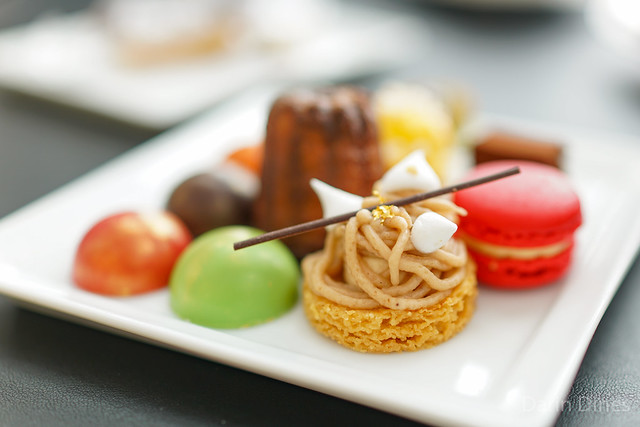 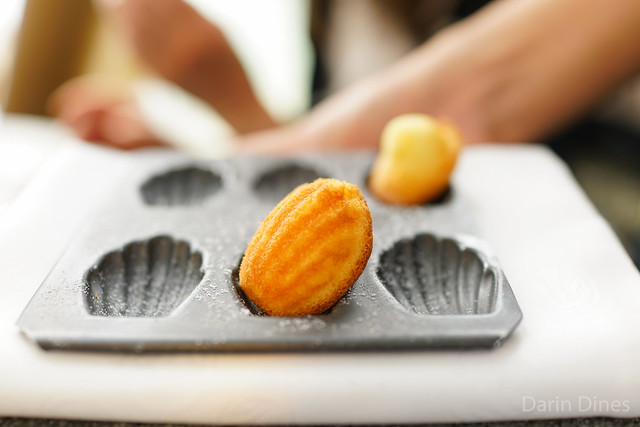 We enjoyed the experience at Robuchon au Dome. It’s really one of the most opulent dining rooms I’ve visited in some time, and the service matched it. Execution of the food was slightly off what I’ve experienced at other Robuchon restaurants around the world, but they were typically small and didn’t take too much away from the meal. Especially with the pricing, I really thought the meal had a ton of value. 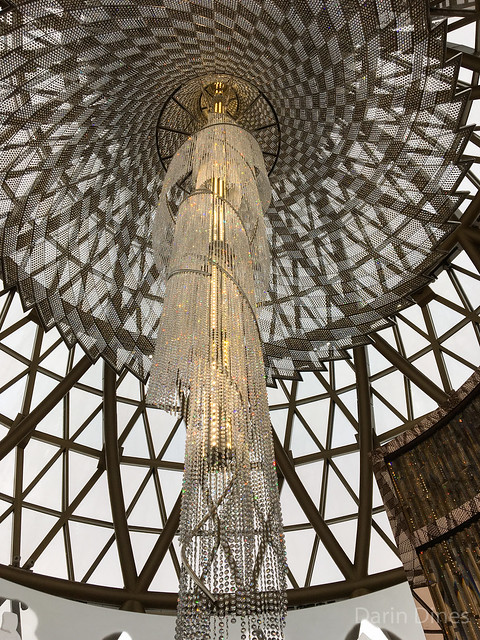 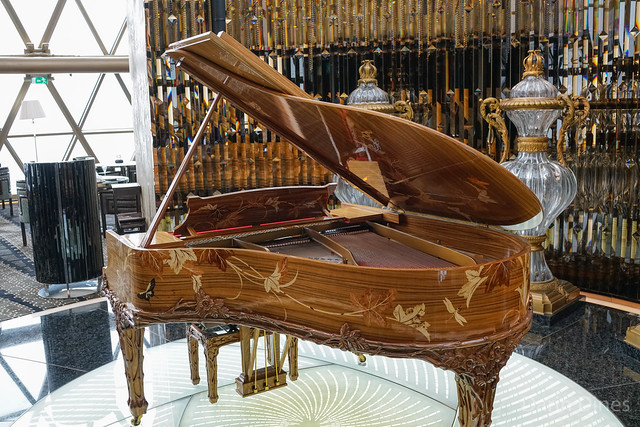 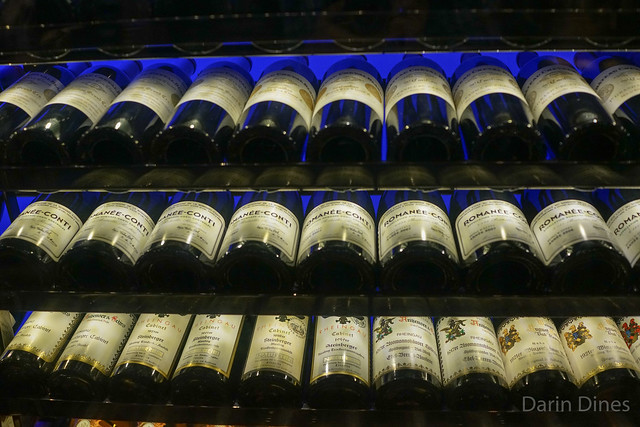