For my first meal after The French Laundry, we went to Quince to celebrate my grandmother and aunt’s birthdays on Christmas Eve. The restaurant recently re-opened after relocating to a larger space in the Financial District of San Francisco. The space is very elegant and modern, and uniquely, one of the first things you see is the kitchen from the exterior.

As it was Christmas Eve, the restaurant was offering a special 4-course menu, as shown below. I’m not really a fan of ‘special’ holiday menus – sometimes I feel like it gives the restaurant a chance to charge more for less (it does), and I usually like to try some of the dishes the restaurant is known for.

The first course began with a Maine Lobster salad.

There was a lot of lobster on the plate, which is a good thing. I thought the ratio of lobster to fruit and vegetable was rather high, though. Lobster was cooked well, however.

Second course is a fagotelli of housemade ricotta.

This was a nice pasta. The pasta was al dente and the filling smooth and creamy. Chanterelles added a nice touch. The third course was an option between goose and beef.

The goose, prepared in two ways (the breast and in a sausage):

The goose was disappointing. The meat was rather tough and had some gristle. The sausage was flavorful but rather dry. The spit roasted rib of beef was better:

For dessert was the “buche de noel,” which was actually a mousse concoction resembling a buche de noel. This was pretty good – light and not too sweet.

To finish off the meal, we were brought some mignardises.

Quince was a little disappointing, largely due to the main entree (and maybe because I had a great meal the night before)). The other courses, however, were solid. The holiday menu definitely was not a great deal on this night. I probably would come back to try their regular menu, especially pasta tasting menu, as I was a fan of their pasta dish.

Drago Centro has got to be, for me, one of the most frustrating restaurants in Los Angeles. Food-wise, it’s one of my favorites in LA. The pastas are just delicious, and their entrees and desserts have also been solid each time. However, it’s the service that kills me. It’s completely unpolished. It’s very inconsistent and frequently lacking – for a restaurant of this caliber, it falls way short.

I’ve eaten here 5 times now since it opened in November 2008, and have gotten a good picture of what to expect from the food and service.  I feel like the service is generally unpolished, but that you do get better service if you’re older and/or in a suit. The service was actually very good the one time I came with my parents, but has fallen flat each other time. Problems have been everything from inattentive waiters, forgetting wine pairings with food, and serving a dessert with bacon bits to someone who is a pescaterian (it was made known at the beginning of the meal).

On this latest occasion, 6 of us tried the new Eat & Run menu that debuted the Monday prior. The new 3-course menu for $25 is advertised as catered to the business crowd and is aimed at getting you in and out in around 30 minutes. In all, we were there for about 90 minutes. However, I will not rant here about the timing and service. The food is the showcase – the 3-course this day was:

The salad was simple and fresh. There were only three ingredients. Lettuce, parmesan and the vinaigrette. I tend to like salads like these to start meals, and the parmesan was a nice saltiness to the vinaigrette.

Another in our party ordered a la carte and had the lobster bisque.

This was a rich and flavorful bisque, with a good lobster flavor that was not overpowering.

The main entree was the oxtail, which had a surprisingly generous portion of 3 oxtail chunks over soft polenta and a rich sauce.

This dish was delicious. The oxtail was nicely braised and tender with a rich sauce made from the braising liquid. The soft polenta was a nice complement as well, its soft texture mixing with the chewy, yet tender meat.

We also got an order of what has traditionally been my favorite dish at Drago Centro. The pappardelle with pheasant and morel mushrooms is one of my most memorable dishes of 2009.

It’s a very rich, creamy sauce with nice chunks of pheasant and homemade pappardelle. I remember the first time I had this it was so so good. Now, after I’ve had this each time I’ve had it, maybe I’ve gotten a little tired of it. It’s still quite tasty, but I can’t see myself eating a whole plate of it anymore. Still great for sharing.

For dessert came the tiramisu.

The problem with this tiramisu was the custard:lady finger ratio was way too high. See picture below.

There was very little in the way of the lady fingers. The custard was sweet and tasty, and probably could have been good on its own. However, as a tiramisu, I expected more lady fingers.

The decor is nice – tall ceilings and windows let in a lot of natural light.

There is an impressive wine tower as you walk in. All glass, it fits in with the decor. 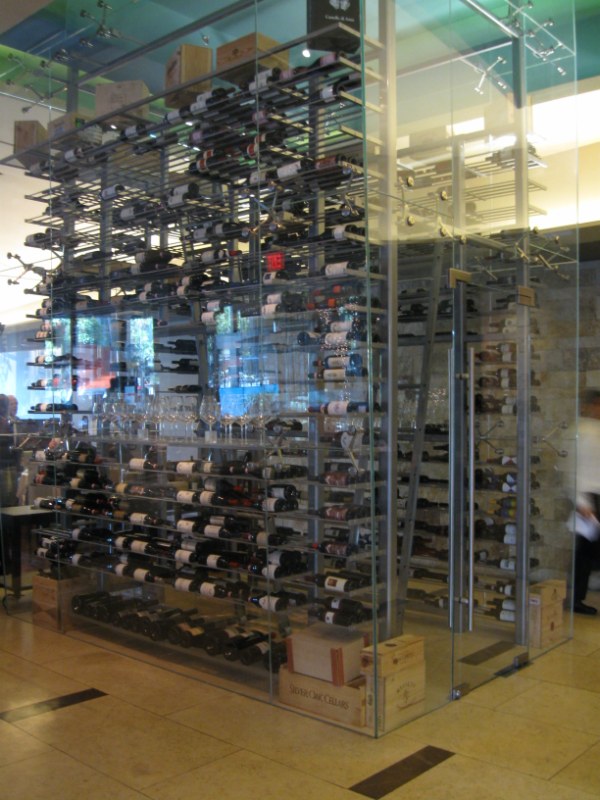 The bar area is separated by the hostess stand and wine tower.

My overall impression of Drago Centro remains the same. The food is top-notch and some of the best in the city. You can go well with just some pastas (I like the pappardelle with pheasant and garganelli with sausage), or stick to one of the entrees (the branzino and osso bucco have both been good). The decor is nice and open. However, the service is really lacking and takes away from the whole experience.