I heard about Sushi Nozomi a little while ago but hadn’t had a chance to stop by until now. I’ve read some pretty strong reviews, particularly about the uni. The head sushi chef (Yasu) has a close connection with the boats in Santa Barbara and thus has some of the best uni in the area. 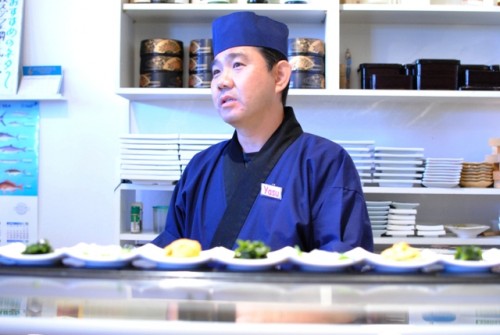 Most of the uni I see is served from a small wooden box. Interestingly, Nozomi’s uni comes out of the back on paper towels, presumably just plucked from the shell. Nice!

Danny of Kung Food Panda led the charge to come to Nozomi, actually having visited in the prior week. We settled in for an omakase dinner, setting the price at $80. Throughout the night, our alcohol of choice was sake. 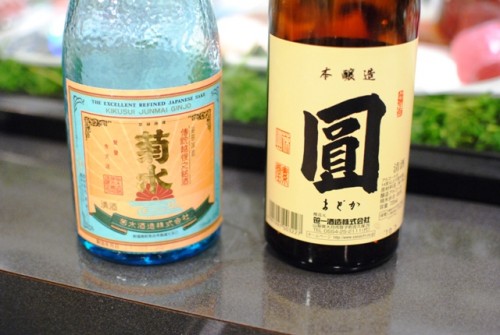 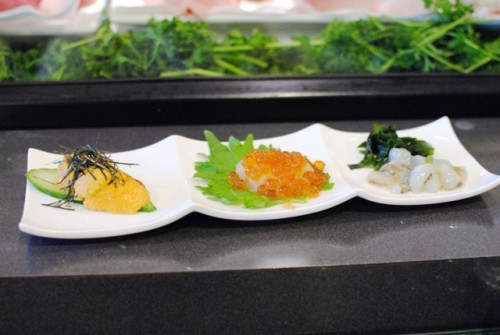 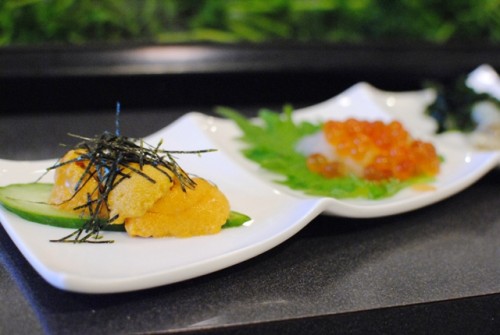 We started off with an appetizer trio. The squid was deliciously chewy with just a little bit of heat from wasabi, tempered by seaweed. I enjoyed the daikon, grated to a creamy texture, with the saltiness of the roe. Lastly – a look at the uni. Predictably, it had a clean sea flavor…a very good example of uni. 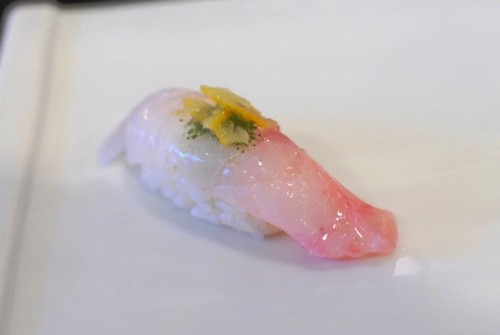 I appreciated the acidity of the yuzu zest, complementing the slightly chewy grouper fish. 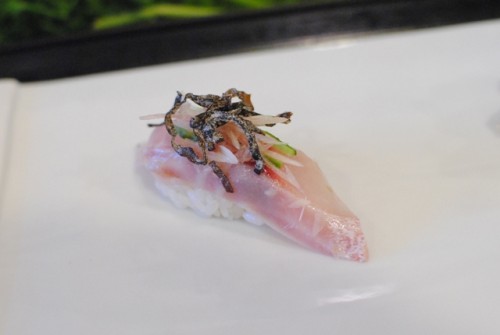 I don’t think I’ve ever had this before. Crispy cucumber strips added a little bit of texture. There was also a slight smoky flavor here too. 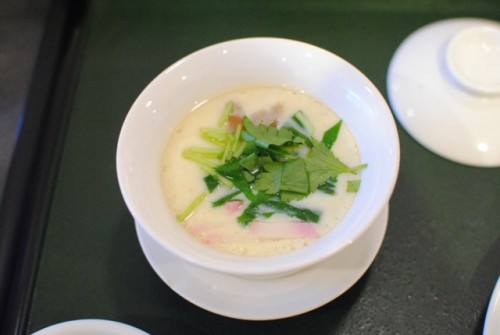 We took a break from sushi for a chawanmushi. This was pretty tasty and well-seasoned, with the earthniness of the mushroom being one of the main flavors in the custard. Some ocean flavors from shrimp and fish cake were also welcome additions. 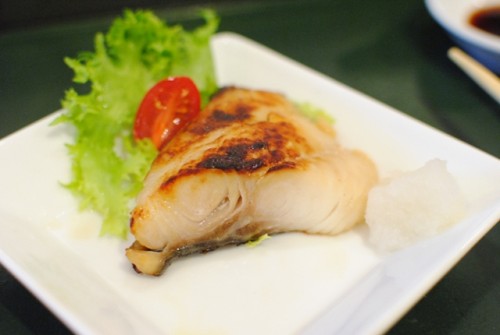 I thought this was done well, though it’s a dish I’ve had dozens of times…and frankly, a little tired of. 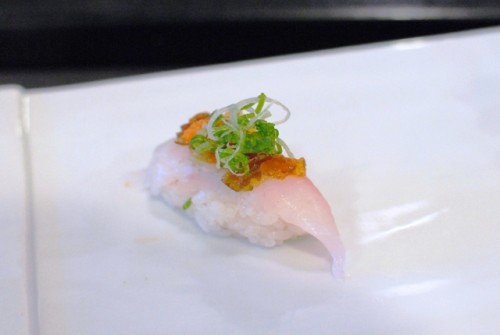 I thought the ponzu jelly was somewhat overpowering here with, interestingly, a salsa-like aftertaste. I don’t think I agree with the jelly texture on sushi. 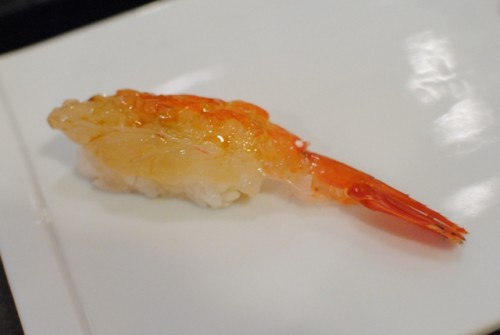 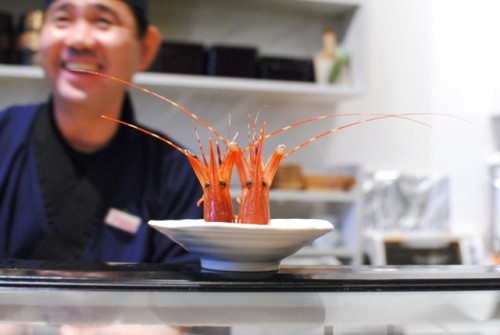 We rebounded with a fine example of sweet shrimp. To show how fresh they were, chef Yasu pulled off the heads and displayed them in front of us, still moving. Sweet and spongy, really delicious. 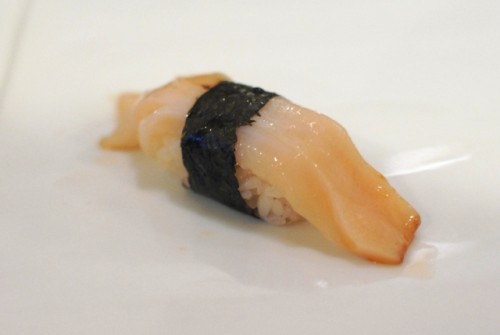 Chewy yet still tender, the clam had a subtle fishiness to it. 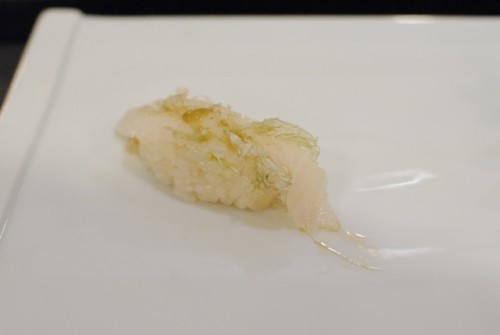 I thought this was really tasty, with the slight chew of the fish and the spicy citrus of the yuzu kosho. 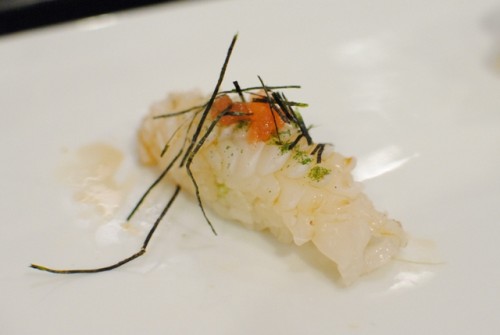 Slightly chewy but still tender, I liked this example of squid. 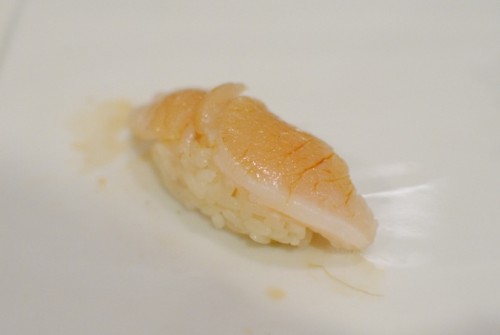 I took this as the adductor muscle (“scallop part”) of the giant clam. It was really tender, and kind of like an actual scallop, though with a brighter, sweeter flavor. Really nice. 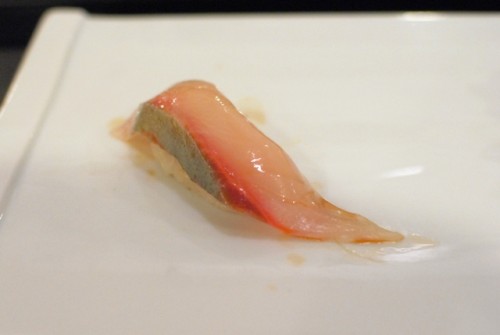 Slightly chewy with a clean flavor. 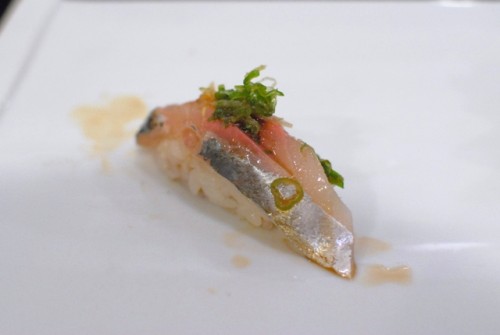 I found this fish to be really tender and flavorful with a welcome green onion accompaniment. 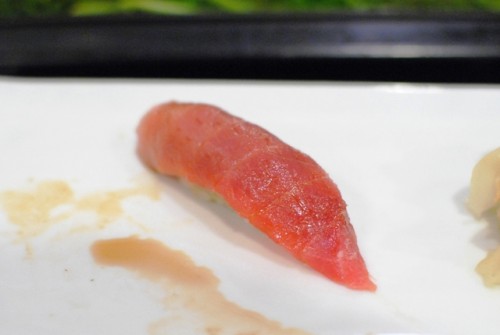 This chutoro was just about melt-in-mouth texture with a rich flavor. 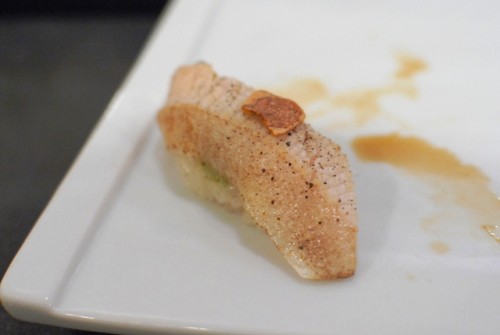 The garlic added a new dimension of flavor to the yellowtail belly, which I liked seared here. 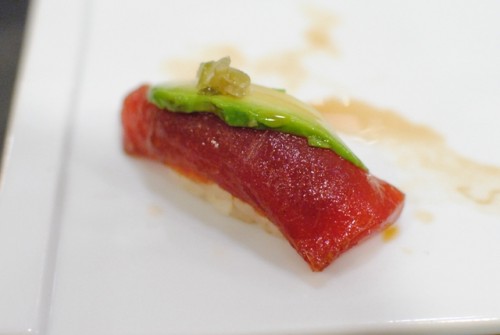 The tuna was just as tender as the avocado, which added a richness and body to the dish. The slight heat of the wasabi was welcome too. 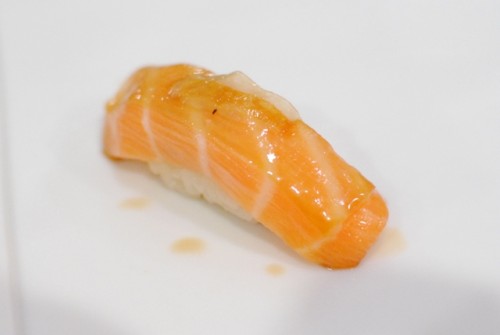 A good example of salmon, though not memorably so. 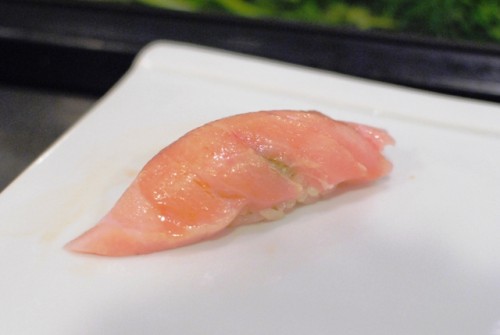 A fine piece of fish, tender, fatty and melt-in-mouth. Pales in comparison to Urasawa’s…but so do most. 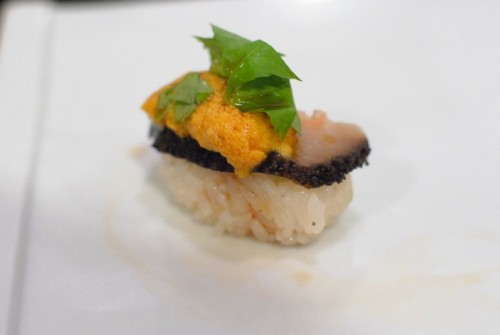 Sea cucumber! Nice. The cucumber was chewy while the uni was meltingly soft. Both flavors were rather subtle, melding pretty well. 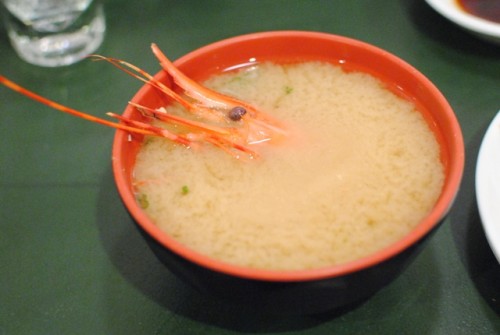 Remember the shrimp heads that were still moving? No longer…we found them again in our soup – a good miso soup. 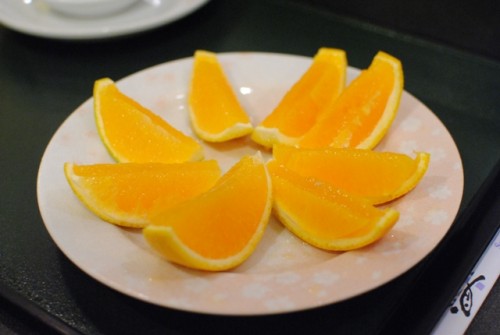 Patisserie Chantilly, located in Lomita, is a patisserie utilizing French technique with a Japanese touch. Yum. Technically, we stopped by Patisserie Chantilly before Nozomi…but I thought it would be the best fit here at the end. I’d been to Chantilly once before and was impressed with the matcha cake; given that we were in the area, a stop was definitely in order. 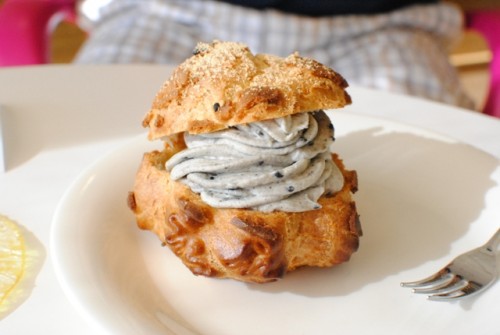 This is probably their most notable item, even being named one of the 99 things to eat in LA before you die by Jonathan Gold. The cream was light, with an impressive depth of sesame flavor. Add to it the crispy, flaky choux pastry, and I could see why it was so popular. 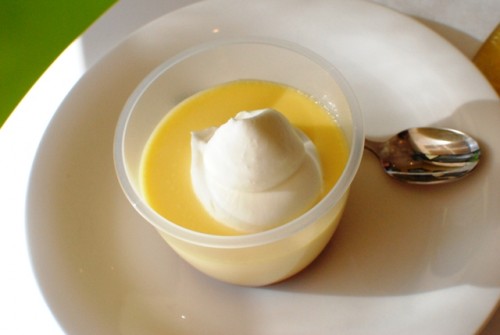 This was a light, eggy custard. A side of caramel added much more flavor. 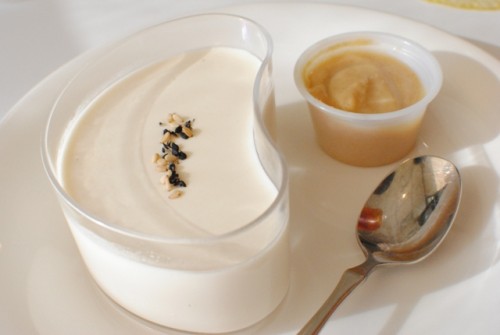 This may have been my favorite item. The flavor was so subtle and the tofu so delicate. The tofu was silky smooth, while the sesame brought an extra flavor profile.

As expected, Patisserie Chantilly was a hit. I enjoyed the combination of French technique with Japanese flavors; the subtlety and finesse of each dessert were both on strong display.

Nozomi presented a pretty strong meal. For traditional sushi, it was one of the most topping-creative nigiri presentations I’ve seen in a while (or ever). For the most part, I really enjoyed the different flavor accents this provided. I wouldn’t say this was up to the level of, say, Sushi Zo, but I’d rank it right up there with Mori. For $80, I think Nozomi presented some pretty good value, as well as an impressive variation of fish for the price point.