I’ve been wanting to try Animal for a while, and finally got the chance. Founded by Jon Shook and Vinny Dotolo of Two Dude Catering (Food Network) fame, Animal has been a consistently popular restaurant since it opened in 2008. Every time I’ve tried to make a weekend reservation (I admit – usually with short notice), I get a response such as “the earliest table we have available is 10:30.” Or 11:30. What! I didn’t even realize people were seated that late (the restaurant is actually open til 2am on Fridays and Saturdays). They offer the full menu for first-come, first-served walk-ins at the bar, and this is what we opted for. 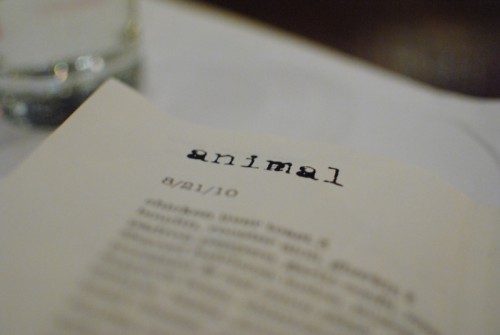 Obviously, this place is not for vegetarians, as the menu is meat-centric, offering various meats and cuts that are rarely found all in one place, including oxtail, rabbit, sweetbreads and octopus. 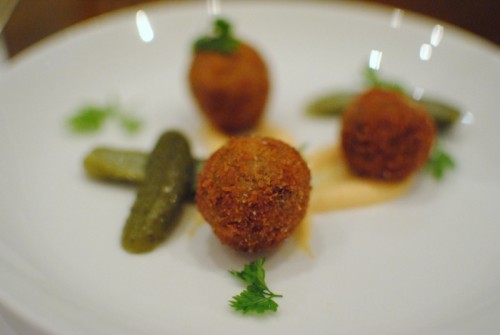 This boudin was made of chicken liver and rice, then fried in bite-sized balls. It was actually pretty light, and nicely crispy – a good way to start the meal. 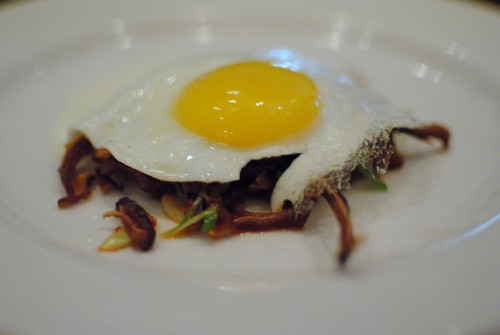 Here, pig ears are sliced thin and fried. Combined with lime and chili peppers, it’s topped with a fried egg. Honestly, the fried egg really makes this dish for me. The spiciness of the peppers was slightly mellowed out by the runny egg yolk, which really brought everything together. However, I could’ve used two egg yolks here. 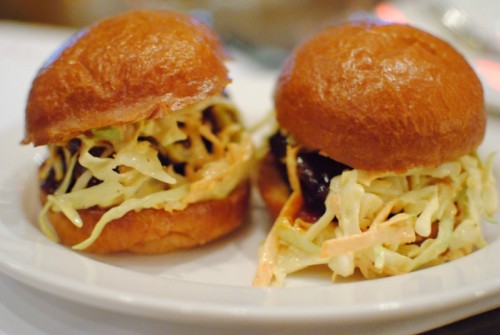 First off, the pork belly was melt-in-mouth tender. It probably helped that it was a rather fatty piece of pork. The meat was succulent, with the barbecue sauce adding a slight sweetness and smokiness that was not overpowering. Too often I see BBQ pork sandwiches that are dredged in a thick BBQ sauce, and this was not the case. The coleslaw added just the right amount of acidity and lightness to this dish. Bravo! 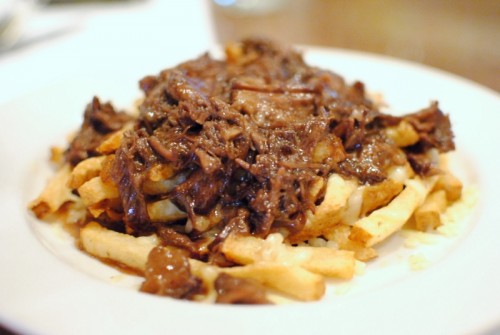 I remembered seeing a picture and description of this dish when I first heard about Animal and was like…this is a total must-order. I love oxtail. Here we have braised oxtail and its gravy (presumably the braising liquid), on top of french fries and a mild cheddar cheese.  I think the fries were fried extra crispy, in order to add more texture, and combat sogginess from the gravy. Really delicious – definitely a fan. 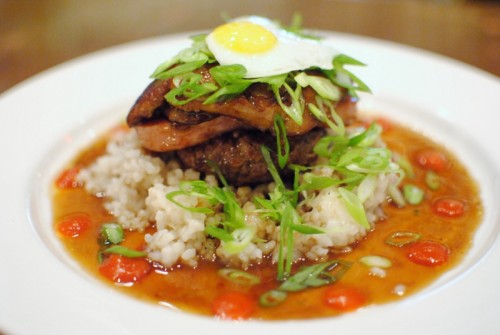 Here’s a play on the Hawaiian staple dish of loco moco which, at its base, usually has rice topped with a burger patty, spam, fried egg, and gravy. Animal steps it up a notch with a lobe of foie gras. Completely decadent and rich! I first tried pieces of each of the components separately and found them good on their own. Combined, it made for something quite tasty (though, it can be hard to taste the foie gras with all those components, since it’s a pretty thin slice). This was probably my favorite dish of the night. 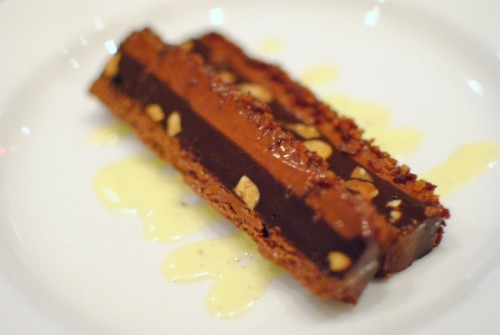 Of course, a restaurant named ‘Animal’ would have a dessert with bacon in it. I’ve heard a lot about this dish, and it’s the must-try dessert on the menu. Layers of rich chocolate and hazelnuts is topped with bacon bits. I like salty things with chocolate, and the bacon lended this saltiness and the “crunch” in this bar. While good, I wouldn’t particularly say it was ‘great,’ however I was pretty full by this point. 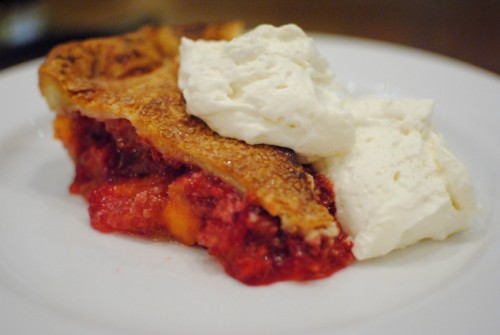 Animal serves a daily pie topped with freshly whipped cream. Today’s pie was peach and raspberry. The peaches were nice and sweet, and the raspberries were tart (a little too tart for me). The pie crust was quite nice though, and the whipped cream was a nice accompaniment. I began to actually eat the cream with the bacon chocolate crunch bar, which made for a pretty good combination.

In all, Animal met my (high) expectations. The food is a little different, with innovative takes on comfort food and some new dishes altogether.  The food is very rich, and you’re likely to leave full and sleepy. At least, I did. I would come back, especially for the pork belly sandwiches and loco moco, as well as to try some of the rest of the dishes on the menu.

Another restaurant from Shook & Dotolo is in the works on Third Street in West Hollywood, which will be a different concept from Animal. It will be exciting to see what these guys come up with.