Flour + Water opened last year and quickly became one of the hot restaurants in town for its homemade pizzas and pastas in a “neighborhood” setting. It has been awarded numerous accolades, including Best New Restaurant by SFWeekly and nominated as one of the best new restaurants in the country by James Beard. It’s still very popular, something I realized as I was trying to make a reservation during Thanksgiving weekend. It was booked solid, but we decided to just walk in and wait for a table…however long it took. About half of the restaurant’s seats are not reserved and are available for walk-ins only. Odds should be pretty good, right?

We walked in with a party of 2 and were told the wait would probably be an hour or so. Damn. It was literally almost freezing outside, so we decided to wait it out in the restaurant over a couple of drinks. Just as we were deciding to order, the hostess came up to notify us that someone was a no-show…and we were taking their table! Score! 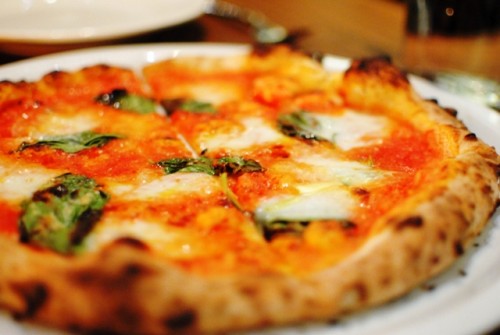 At a place called “Flour + Water,” a pizza was a must-try. Here we had the margherita. A crispy, thin crust was topped with a sweet tomato sauce and mozzarella. A very good pizza; though, I did prefer Zero Zero’s version, as I thought their flavors were a little more vibrant. 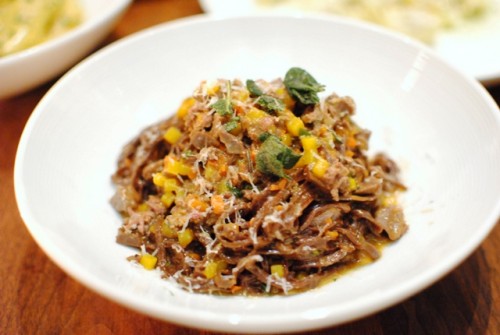 Of course, some pastas were in order. This was a pretty interesting pasta, as it was made with cocoa. I did taste a subtle cocoa flavor in the pasta, but the deep, meaty ragu was much more pronounced. The corn added a nice sweetness and freshness to this rich dish. 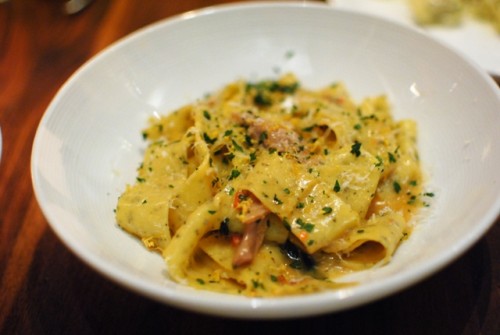 One of the best things I ate in 2010, no doubt. Now, I love myself a bowl of good pasta…which is exactly what we had here. First, we had pieces of rosemary speckled throughout the pasta – this gave the pasta a unique look and an interesting way to impart the herb’s flavor. Rosemary can often be overwhelming, but it wasn’t at all here. The hen was tender and succulent, and made for a fantastic bite with the al dente pasta. Finally, some meyer lemon zest added just a little bit of citrus to complete the dish. Amazing!

A meaty pork shoulder filled these agnolotti. The pasta was cooked a nice al dente, and really packed a lot of flavor with the pork. A light butter-based sauce was a welcome addition. 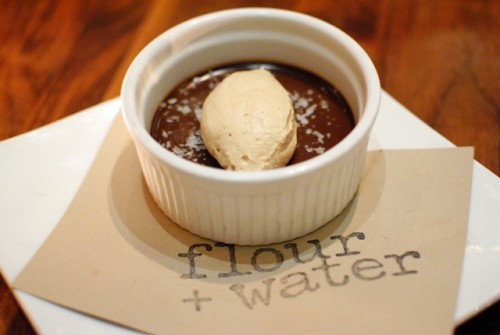 This has to be the restaurant’s most well-known dessert. The budino was rich, yet not too thick, with a good chocolate flavor. I especially liked the espresso-caramel cream with the chocolate, and the sea salt was a really nice way to bring out the flavors.

While we were only able to try a few dishes between the two of us, I thought it was a pretty good sample of what the restaurant had to offer. I’d have to say I was impressed. I’m a sucker for good pastas, and here I found them to be imaginative, well-executed and, of course, delicious. The menu is small and changes often, so I’m not sure if I’ll ever be able to try the rosemary pappardelle again, but it’s something I will remember for a long time. A return visit is in order.