The French Laundry is a food temple – a trek that any gourmand in America must make at least once in their lifetime. I first went in July of 2004, and it was easily the most anticipated meal of my life. I remember not being able to sleep much the night before. The restaurant had just gone through a renovation and had not announced an official re-opening date. I was playing around on OpenTable one night and stumbled upon an availability.  I remembered having to wake my dad to tell him this news, and use his credit card in order to confirm this reservation.

I had gone again in December of 2006, and now in 2009, figured it was time for a re-visit. It’s gotten noticeably easier to get a reservation on OpenTable. With a little persistence, I was able to snatch a 5:30 (in my opinion, the ideal time for a group not staying overnight) reservation over the Christmas holiday. Armed with a new camera (thanks Angela!), I was excited for this next trip.

Upon entering the premises, you walk into a garden and outdoor waiting area.

The famous blue door entrance to the restaurant.

The dining room is cozy and has a very warm and elegant feel to it. 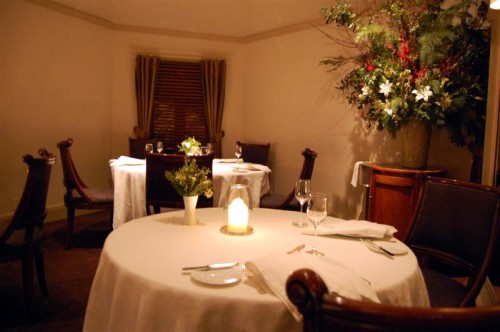 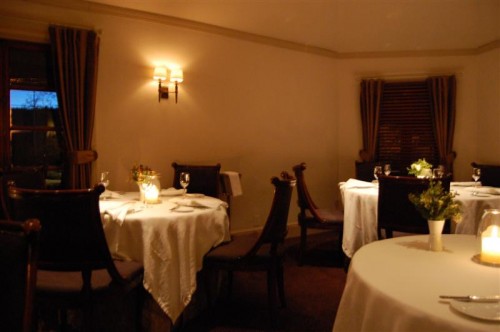 Each table is set up with fresh flowers and the signature clothespin holding the napkin together. 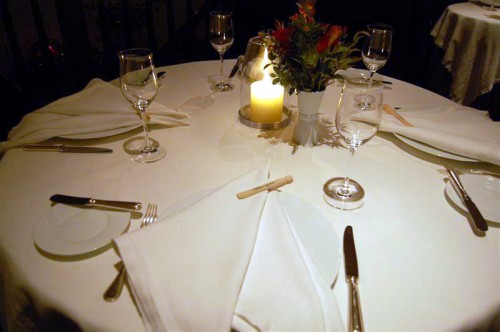 The menu has two options: the chef’s tasting menu and the tasting of vegetables. The menu for the day is here: French Laundry menu – 12/23/09 and the chef’s tasting menu, which we all had, is shown below. There was also an optional supplement offering white truffles from Alba, shaved over an option of housemade tagliatelle, gnocchi, or a Carnaroli risotto.

The amuse bouche served here have been staples over the years. The first is the Gougères, which are cheez-it flavored light cheesy bread puffs. 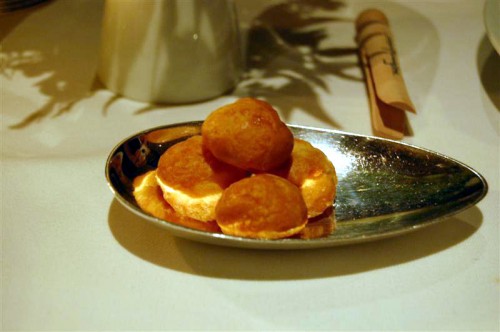 The second is the salmon tartare coronet with creme fraiche. Simple and tasty, they make a great start to the evening. 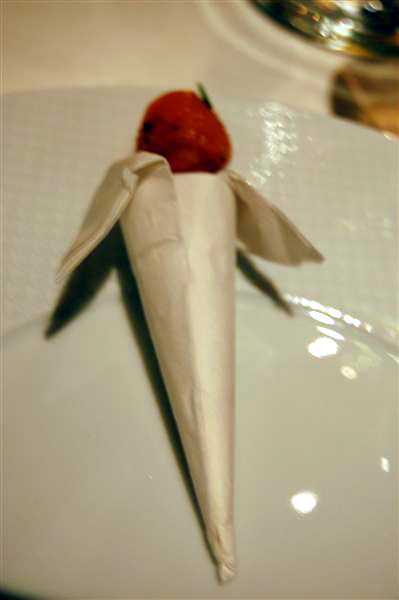 Next was the first main dish of the night, also a staple of the menu. 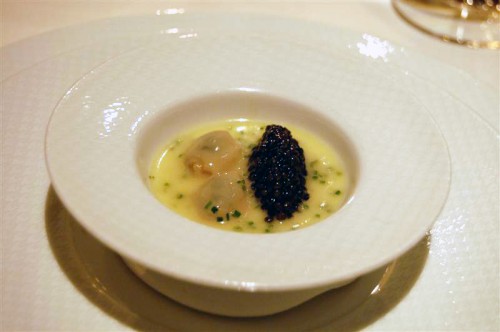 This is a really creative dish and a nice play on words. The oysters are trimmed and set into this tapioca sabayon with a dollop of caviar. Really delicious.

The next course had an option of a winter squash soup and a foie gras terrine. 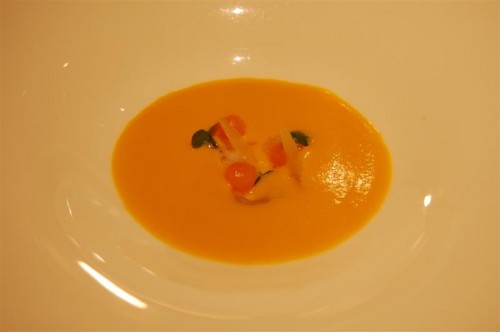 There was not much to the soup. It tasted of squash with a little spice, but not much else. 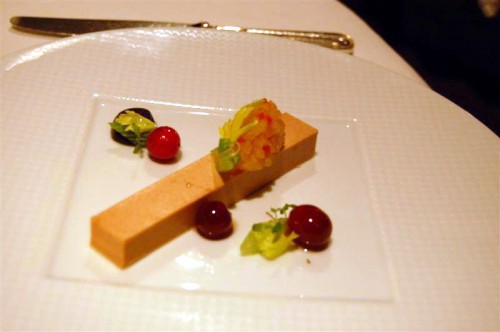 This was pretty good as a terrine goes, as I usually do not like them. The accompanying brioche was delicious and came with three finishing salts.

The next course, a seafood one, was a choice between a bass and scallops. 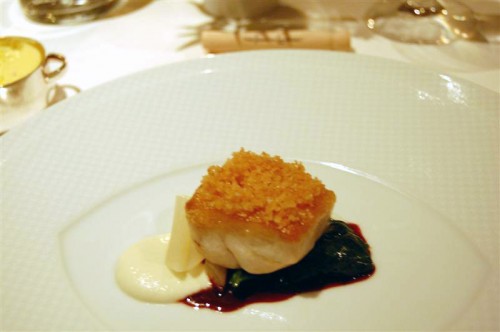 This was a great dish with a nice crust and a moist flesh. Definitely cooked well. 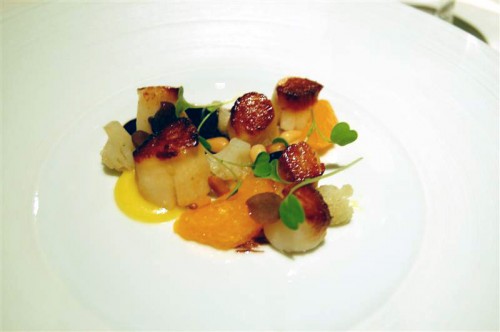 This was one of the more disappointing dishes of the night. I definitely prefer sea scallops to bay scallops because they’re just meatier and less prone to being overcooked. I don’t think the scallops were overcooked in this case, but the olive ‘paint’ was just way too overpowering for this dish.

The next dish, served to everyone, was a highlight. 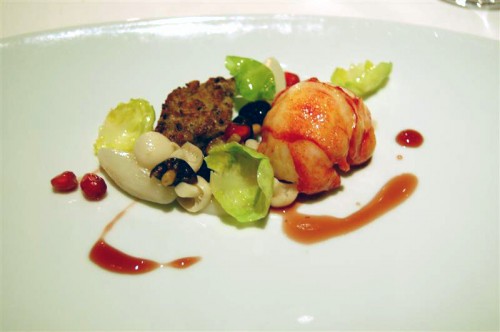 After the lobster course was the truffle supplement. I chose the white truffle to be shaved over the risotto. This dish is quite an experience as well, as the server will bring the huge truffle around in a box to be smelled and then will proceed to shave it on top of the risotto. It was then finished with a little brown butter. 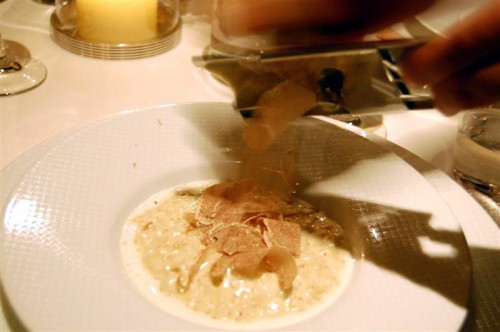 The risotto, prepared with shallots, butter and grated truffle, was really well-made on its own. The truffles, as well as the brown butter, completed the dish and made it unforgettable. 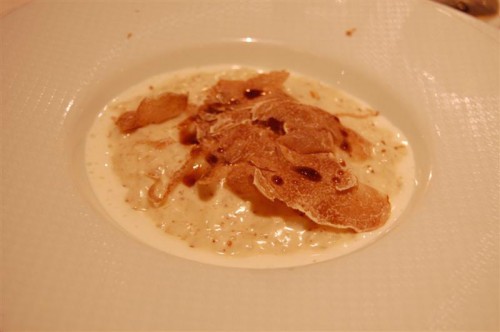 The next course was an option between white quail and rabbit shoulder. 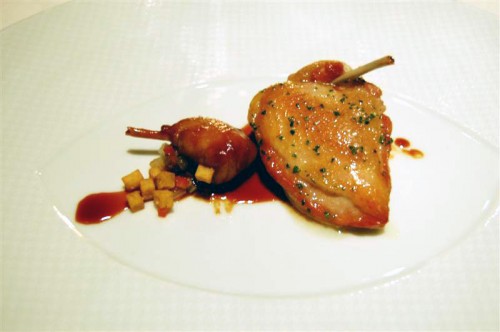 This dish was the single most surprising for me of the night.  White quail, as explained by the server, was a cross-breed between chicken and quail. I had never heard of this, let alone tried it, so I had to order it…and was glad I did. The breast was so juicy and moist, shocking as it was white meat (closer to chicken than quail).  The leg was good as well, but by comparison, paled compared to the breast. 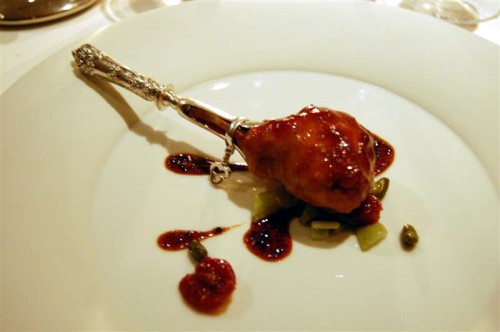 The rabbit shoulder was stuffed and glazed. Not a bad dish, but it wasn’t as good as the white quail. 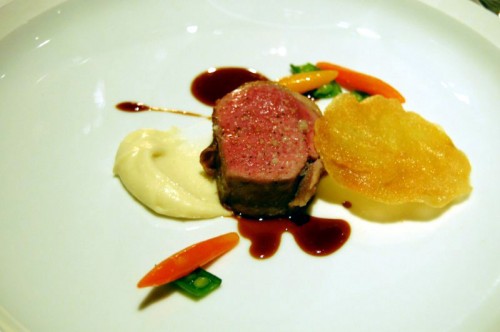 The lamb is prepared sous vide for 80% of the cooking, and seared for browning the rest of the way. This was a great piece of meat that was juicy and tender, and not too gamey. 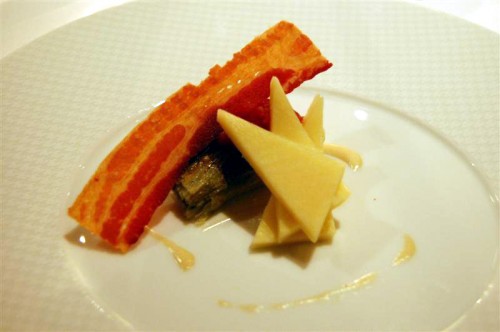 The substitute dish, a russet potato gnocchi, served with brown butter and grated black truffle, was very simple and good. 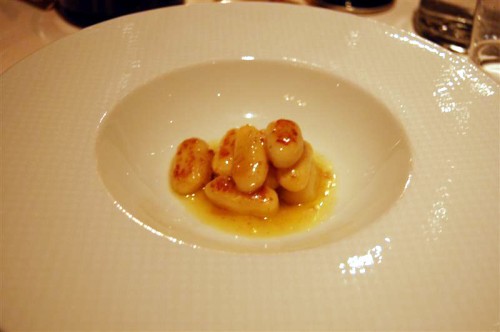 Next, the first of three desserts. 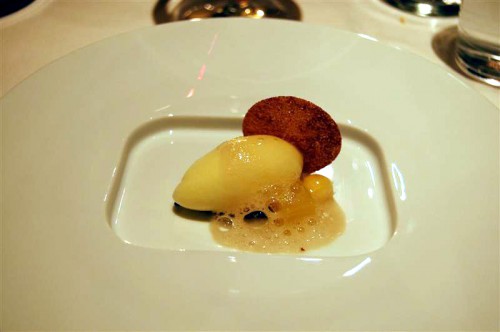 This was a light dessert, serving to cleanse the palate and give a sweet introduction to dessert courses.

Our next dessert was specifically requested off the menu, due to the fame it’s garnished over the years. Luckily for us, the kitchen obliged. 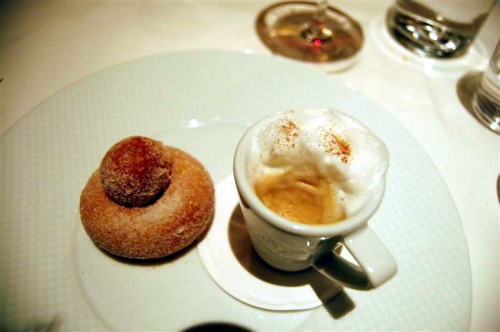 This was probably the best doughnut I’ve ever had. Warm and soft – it was just delicious. The semifreddo had a rich coffee flavor to it (I took a scoop to show the “coffee” under the “milk froth”), but the highlight was really the doughnut.

The final dessert was a choice between two dishes. 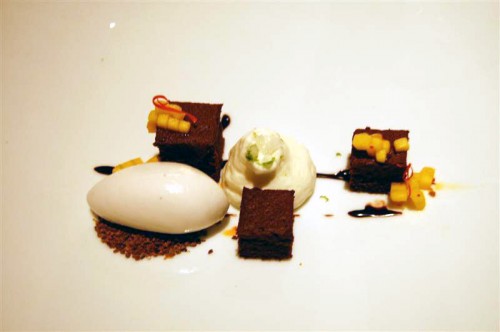 This was a flourless chocolate cake, and I really liked the coconut milk sorbet. The lime foam, topped with sea salt, was not really necessary, in my opinion. 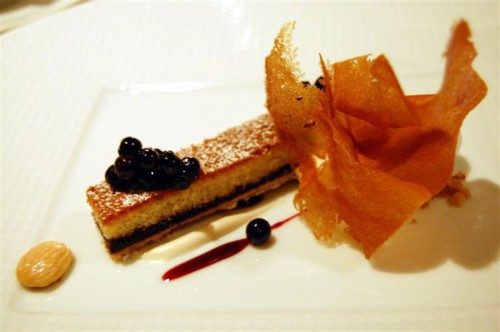 This was an interesting dish. A little bit doughy, a little fruity – this would be a nice end to the meal.

The mignardises for the night included a pecan tart, caramel and chocolate covered macadamia nuts, and assorted chocolates. 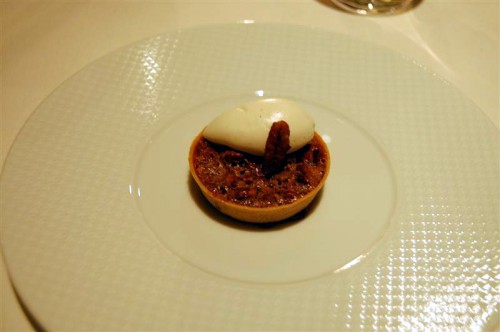 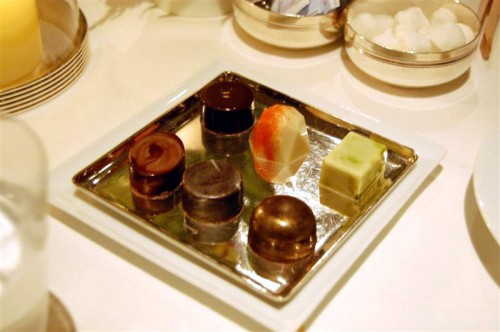 The pecan tart and macadamia nuts were not remarkable, but the chocolates were good, especially the pumpkin (orange and white colored at top). Unfortunately, we were so full that we were not able to try all of the flavors.

At the end of the meal, the bill comes out on a laundry tag, a fun touch that the restaurant has had since its inception.

In addition, we each got some shortbread cookies to take home. 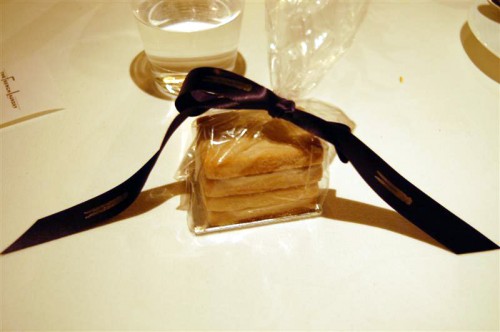 We were lucky enough to be invited into the kitchen at the end of our meal.

We were told that Thomas Keller had been in the kitchen and left an hour earlier (DAMN!). However, it was great to be able to check out the kitchen, which was spotless. I was surprised by just how small the kitchen was, and how it was able to serve such an array of dishes in such a small space.

In all, it was a great experience. I was a little anxious that it wouldn’t live up to expectations, because they were quite high, and I had been hearing a lot of peoples’ concerns about Chef Keller’s decreasing involvement in the kitchen. However, the restaurant definitely lived up to my expectations and proved to be a fantastic meal.  We were all very pleased, and I can’t wait for my next trip back.