It’s been a little while since going to Bouchon. Since going twice on its opening weekend, I hadn’t been back until now. I was interested to see if the food and service still held up to what I remembered from the first weekend. My friend and I came on this Friday night at 8 without a reservation – and were able to be squeezed in outside under the heat lamps. 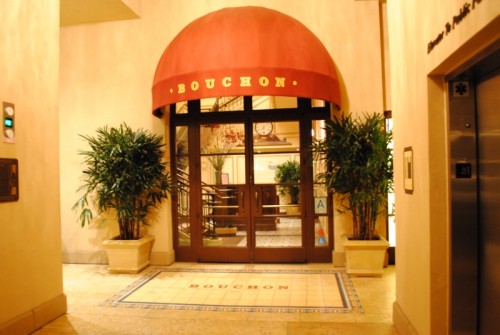 I have said that Bouchon is one of my favorite casual restaurants. It’s simple French bistro comfort food done well. The execution, as expected at any Thomas-Keller restaurant, is top-notch. The first dish we ordered was one of the daily appetizer specials: salmon tartare. 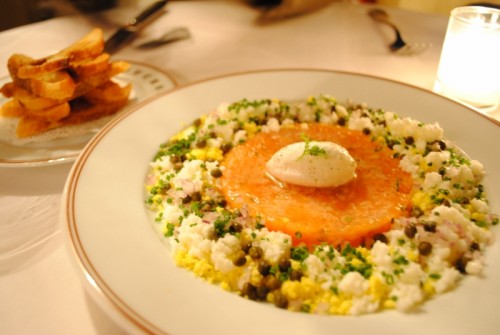 The salmon tartare was topped with lemon juice, and accompanied by shallots, capers, chives, eggs through a sieve – and topped with creme fraiche. The crostini that came with it provided the crunchy texture, and the salmon and creme fraiche the bulk of the flavor. 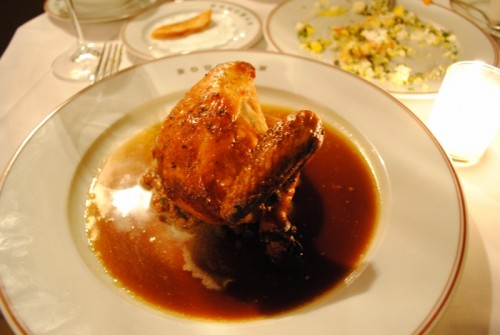 I’ve had the roasted chicken at Bouchon before, and it really is top-notch. The skin is very nicely browned and crispy, and the meat (both white and dark) is superbly moist and flavorful. The chicken jus is rich and delicious, and I almost like the accompanying red rice/spinach/cherries mixture, adding some extra heartiness to the dish. A really well-executed dish. 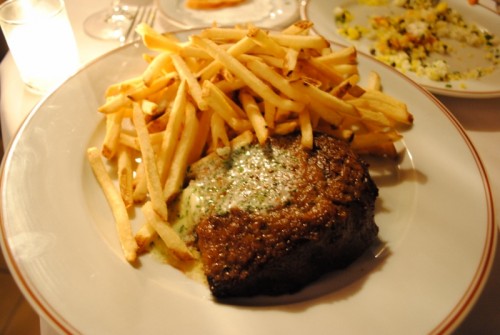 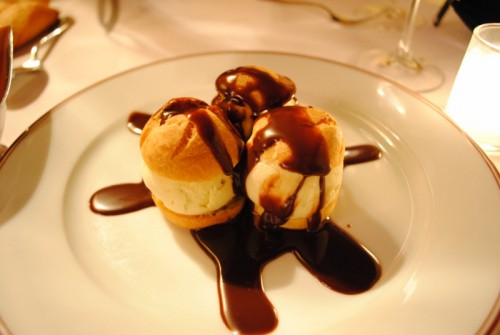 Probably my favorite dessert at Bouchon, these profiteroles are wonderfully simple. The valhrona chocolate sauce sets the tone here, as a rich chocolate flavor that’s not overly sweet. The interplay with the vanilla ice cream is just wonderful. The pasty adds some crisp – in all, a very satisfying dish.
The food tonight was good – on point. However, service was not. Entrees came out before we were finished with the appetizer, and even before our next set of silverware was placed down. We were totally devoid of bread service the entire night. When we inquired about this after finishing our entrees, we were given a pair of loaves to take home. This was definitely nice, though never should’ve happened in the first place. 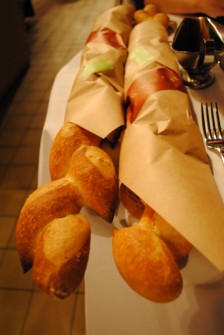 Is Bouchon still my favorite casual eatery in LA. Possibly.  I think the food was still consistent; however, the service on this night was definitely lacking. I’m still a fan of the place, but it’s not the slam dunk that it was when it first opened.