Mo Chica is one of those restaurants that I wonder ‘if I had not heard anything about this place and walked in, how surprised would I be at this food?’ Located in kind of a grungy marketplace food court just east of USC, it’s not exactly a place you’d just stumble into. However, there’s been a lot of buzz around this place ever since it opened, and for good reason. Mo Chica offers a pretty great ceviche, as well as homey, comfortable Latin dishes such as lomo saltado, arroz con pollo, and a braised lamb shank – for very reasonable prices.

Ceviche of the day – sea bass

I like the large chunks of fish – they lend a nice  meaty chew. Definitely a very fresh fish, and not overcooked at all. The popped corn gave a really nice crunchy texture to go along with the fish. 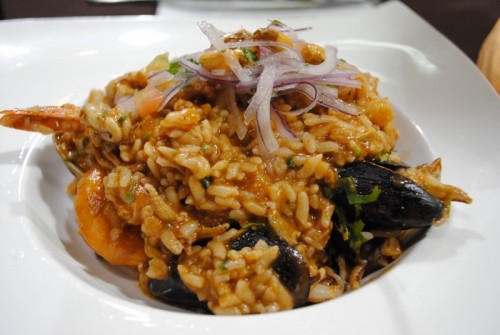 I’m a big fan of dishes where the meat/fish is cooked along with rice in a flavorful sauce. Paella and jambalaya are classic examples. Here we have a paella-like dish with shrimp, clams, mussels and squid. The shrimp and squid were cooked well, but the clams and mussels were a bit overcooked. The tomato-heavy sauce was a bit one-note, I thought. 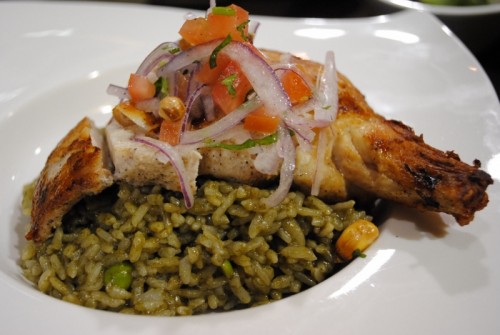 A pan fried chicken breast + drumette served over rice. Often times when I have this dish, the chicken is cooked with the rice, which I like better. However, the rice (here in a cilantro sauce) had lots of good flavor. The chicken was flavorful too, but not too moist. I don’t really think it was overcooked, just not that impressive. 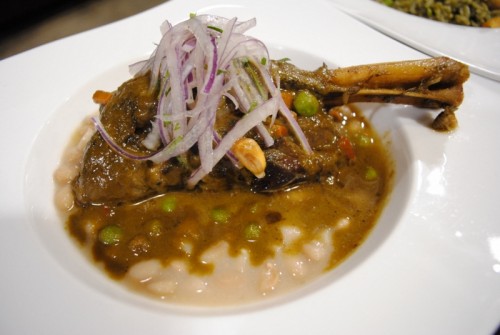 The lamb here was cooked pretty well, falling off the bone. It had a nice chew to it, but was somewhat gamey…just a little too much for my liking. However, still a very solid dish with a very flavorful stew/sauce. 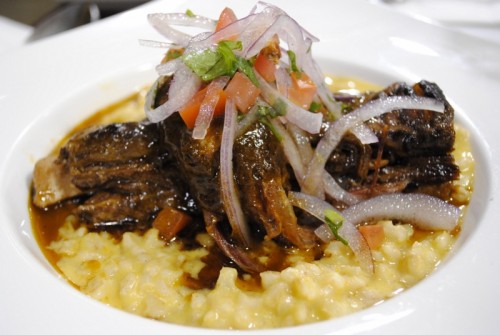 The dish of the day was an oxtail risotto. The oxtail was very good, braised in a rich sauce until fork-tender. Really good flavor. The barley risotto was pretty cheesy, and had a nice al dente texture. Good mix of flavors and textures – my favorite dish of the night.

Mo Chica is a solid bet. Not all of the dishes were complete hits, but none were bad, either. For $11-13 per entree, it’s hard to beat. The ceviches are a must, and ordering a few entrees to split will likely leave you satisfied.