What’s the most sought-after reservation in Los Angeles right now? It’s likely a table at LudoBites, Ludovic Lefebvre’s pop-up restaurant now happening in downtown LA. The buzz around Ludo is immense, from his most recent feature in Time Magazine (http://www.time.com/time/nation/article/0,8599,1986775,00.html), to his recent appearance on Top Chef Masters, to his continued popularity with Jonathan Gold (who was a fellow diner on this night), and to his extreme devotion among food bloggers. Reservations to his 1.5 month stint at Gram and Papa’s were fully booked on the day of the announcement. Luckily, I was able to get two of them. The first, begins below. 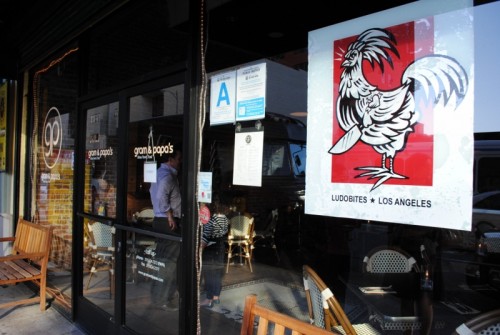 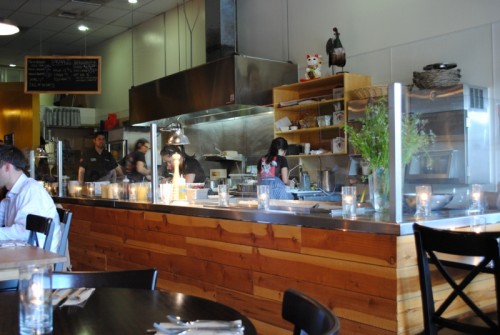 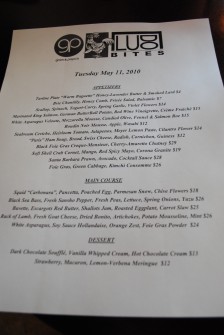 We decided to sample a number of dishes from the menu, in order to try as much as possible. 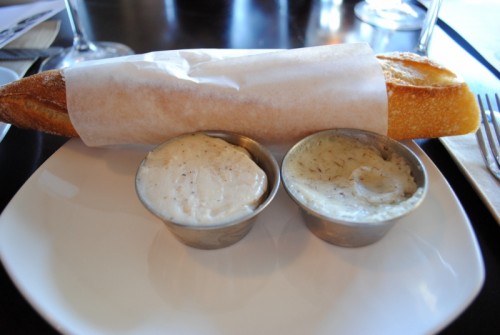 The baguette was freshly baked and still hot. It had a generous sprinkling of sea salt, which I really liked. The smoked lard was good stuff – like extra-strong bacon fat. But even better was the honey-lavender butter – exceptional. Reminiscent of Bi-Rite Creamery’s Honey-Lavender ice cream, it had a great flavor that really went well with the bread, especially with the sea salt. 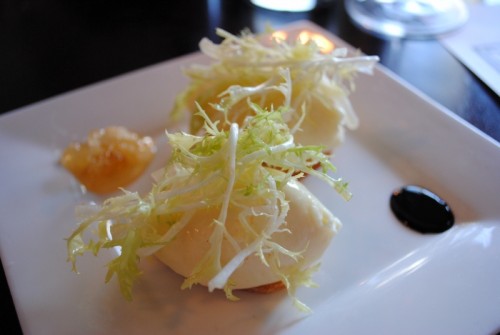 This dish was quite good as well, with a very rich and creamy brie cream. The balsamic and honey comb were excellent accoutrements, balancing well with the cheesy cream. 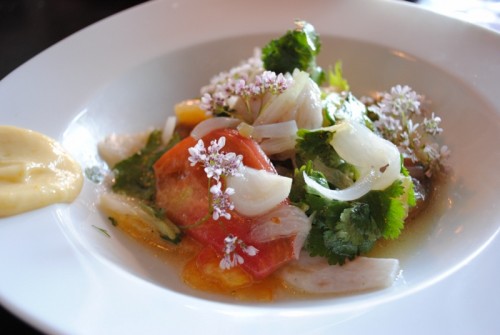 This was a good ceviche, with the jalapeno and cilantro adding a lot of flavor. The presentation was beautiful as well. Not exceptional or wildly original, but a very solid ceviche. 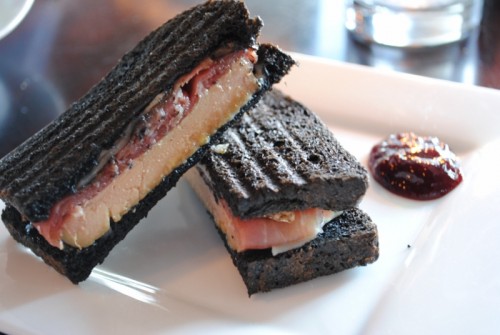 Very interesting dish. The bread is dipped in squid ink and toasted. A generous portion of foie gras and some pancetta (I think? some kind of ham) is mixed in between. The richness of the liver is cut by the sweetness of the chutney. Brilliant. A really exceptional dish. 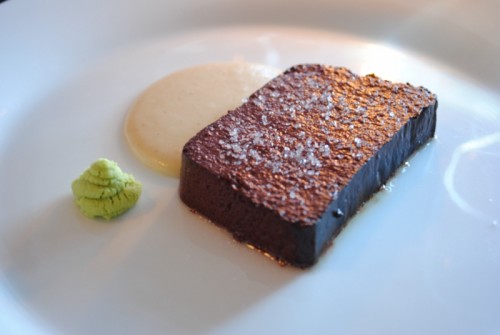 This was an interesting dish. The texture was one very much of liver, with a grainy element to it. I thought the apple and wasabi worked well with the mousse, but by personal preference, this was not my favorite dish.

Throughout the appetizers, we had been sipping on a Spanish Gordello, of which I forgot to take a picture of. As an intermezzo, we had an Alesmith X, which had a nice fruity taste, cleansing the palate nicely. 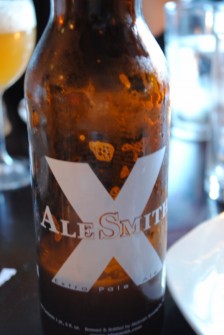 And with that, we were on to the entrees, paired with a merlot. 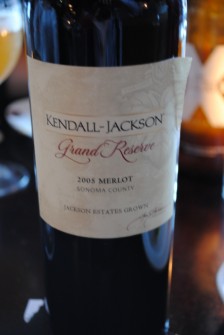 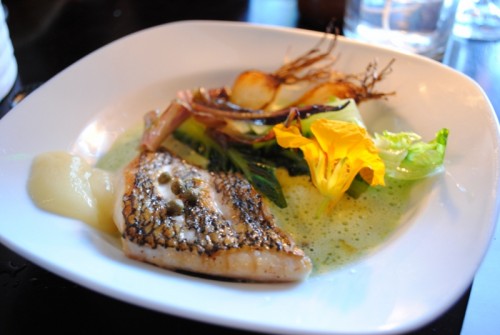 The bass here was cooked very well. Nicely flaky and moist.  Another really nicely presented plate with the colors and the flower. 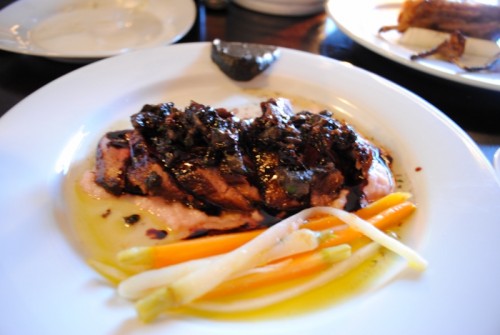 This dish was probably the most disappointing of the night – largely because the beef was tough. Like..surprisingly chewy and tough. Otherwise, I had no complaints, but that pretty much ruined the dish. 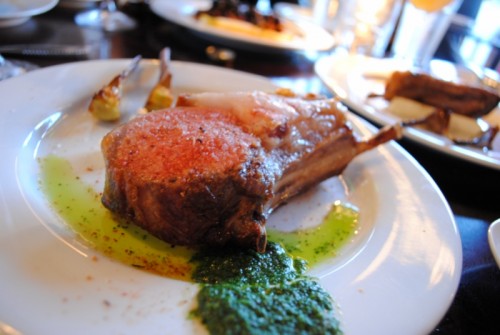 Mmm the lamb was really juicy and tender. There aren’t that many things better than a juicy piece of tender lamb flesh. The lamb was a little gamey, which I enjoyed. I just wish there were a couple more pieces. The potatoes were delicious.

Next were the desserts, of which there were two options – chocolate or strawberry. To pair with dessert, we had Allagash Oddysey. 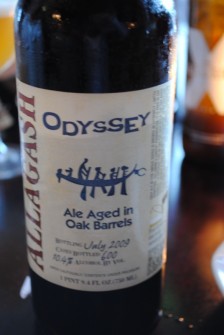 This strong dark ale was really nice with the desserts, especially the chocolate. 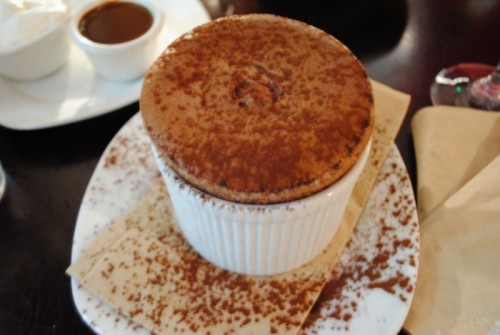 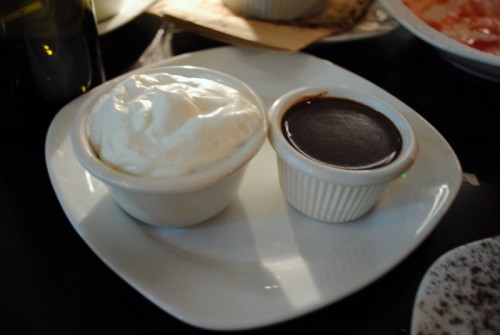 Hot damn! This was a fantastic chocolate souffle. Better than Bottega Louie’s. There I said it. The best I’ve had in LA.  Very warm and fresh with a nice chocolate flavor, the chocolate cream only added depth of chocolate flavor. The whipped cream, very light and mildly sweet, went well. 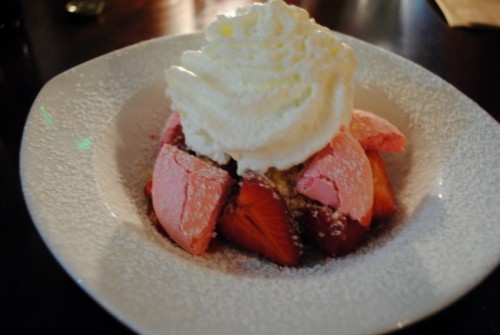 This dessert was much lighter than the chocolate, and topped with the same whipped cream that I enjoyed. The strawberries were nice and sweet, and the macarons provided a chewy texture. I think pop rocks were added on top of the dish, adding an unexpected dimension to the dish! Interestingly, it was my second dessert with pop rocks in the past couple weeks, starting with the Dining Room at the Langham.

We were all very pleased with our meal, even considering we were coming in with high expectations. There were a number of highlights, including the baguette with honey-lavender butter, the foie gras croque-monsieur, sea bass and souffle. The only dish that really was a disappointment was the beef. Ludo even made his rounds, greeting the tables, and we were able to chat with him for a moment. In all, it was a satisfying meal and I look forward to coming back.