I love noodles. One of the things I wish I cooked really well is pasta – in many variations. Making pasta can be very simple or very complex. It can be as simple as boiling some dried noodles and mixing it with a jar of sauce, though I don’t recommend that. I don’t remember what show I was watching on the Food Network, but someone was making a pasta sauce by braising ribs in a tomato sauce, and then mixing it with sauce. It looked delicious!  Thus, I was game to try some variation of this.

I didn’t follow a particular recipe, as I didn’t find one that was exactly what I wanted. Having read through a number, I decided to craft my own concoction. 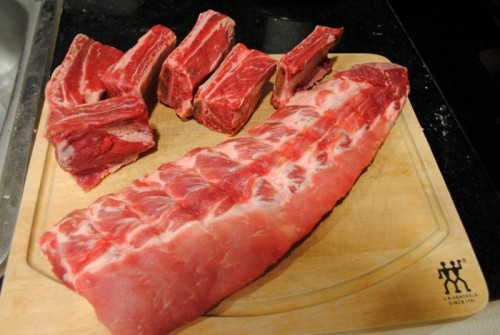 The meats: one rack of pork baby back ribs and a couple pounds of bone-in beef short ribs.

This would largely be a braise of these meats, in a tomato-based sauce. I started my browning my meats. 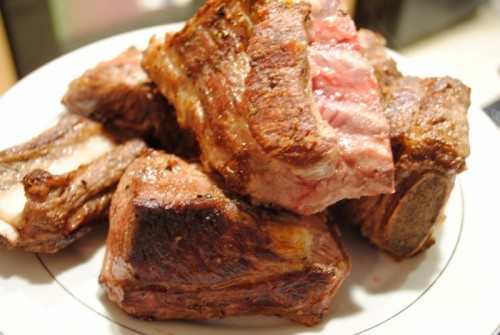 Once done, I sweated down my onions, along with garlic and carrots. 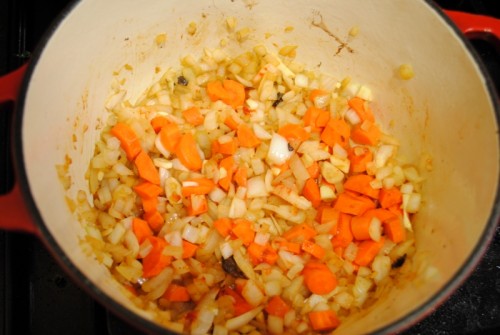 I then added a little bit of red wine, San Marzano tomatoes, some chicken broth, and my meat. Bringing this to a simmer, I transferred it to the oven for the next couple of hours. 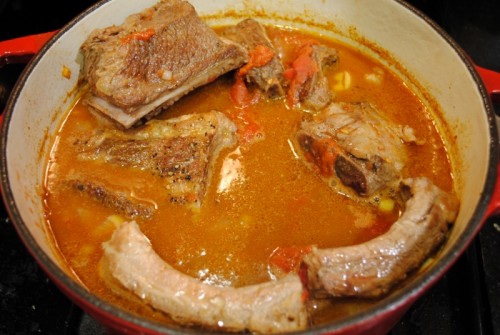 By this point, the sauce had developed a very rich, meaty flavor, and the meat was falling off the bones. I took out the meat, reduced the liquid to a thicker consistency, and placed the liquid in the refrigerator. I would cool this overnight in order to skim the fat off the top once it coagulated.

While it was hot, I pulled the meat apart into smaller, bite-sized pieces and discarded the bones. 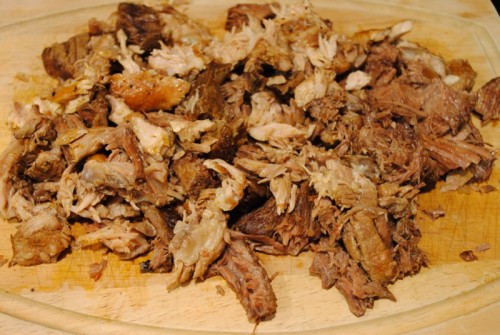 I couldn’t help but eat some of the meat while it was breaking apart, and it was delicious! I actually liked the pork a little bit better, but they were both very tender, moist and full of flavor!

Fast forward to the next day – I removed the fat from my sauce and put it on the heat. To finish, I re-warmed the meat and added chopped parsley and basil. 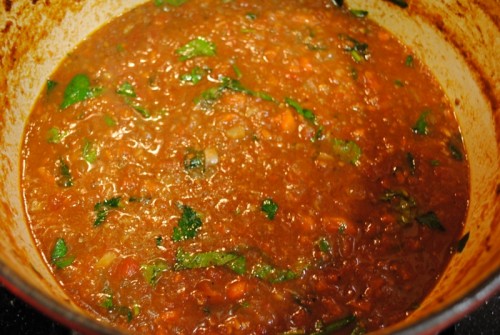 I cooked up some penne for this, and mixed the pasta and meat sauce in a separate pan. I grated some Parmesan over the dish and finished with a little more fresh basil. 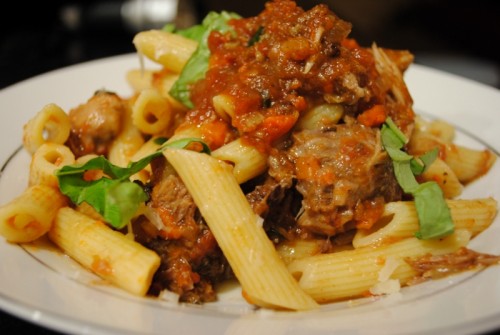 I was pretty happy with how this dish turned out. The flavors were really spot on. However, I found my sauce a little bit on the watery side – I wanted something thicker. I partially attribute this to the juices of the meat coming out after re-adding it, and maybe I added too much liquid to the braise (mainly, the chicken broth). Oh well. Next time, I might add more tomatoes and less liquid.