I’d been to Porterhouse Bistro a few years ago, and my lasting impression was generally “okay, good value.” My friend is getting his wisdom teeth taken out tomorrow, and he wanted a steak. Combine that with a Groupon, and I have my second visit.

Porterhouse Bistro doesn’t hide the fact that they serve USDA Choice grade steaks – they actually brag about serving some of the best Choice grade steaks, promising you won’t know the difference between Prime and Choice. They’re well known for offering these steaks as part of a 4-course prix fixe menu for a very reasonable price ($43 currently).

Instead of the prixe fixe, the two of us opted for a la carte. We wanted the extra flexibility, and didn’t want dessert – we would be saving room for Mozza afterwards. 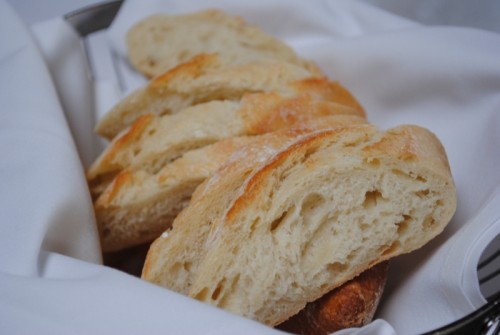 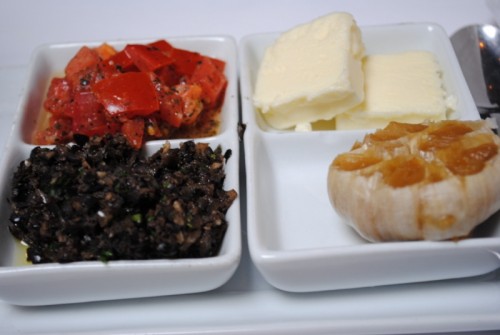 This is actually the first “course” of the prix fixe menu as well, even though you get it free when you order a la carte. Kind of a cop-out course if you ask me. The bread was served warm, but it was reheated a little too long, as the exterior was a little chewy.  The accompaniments were okay though.

We went with two different appetizers. 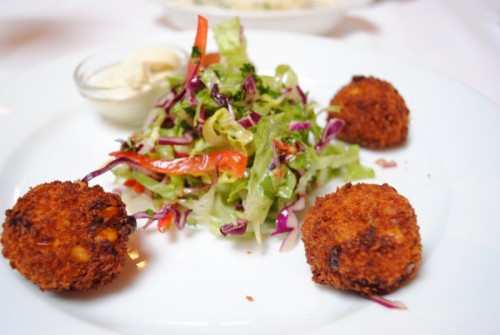 These were fried a bit longer than ideal, but good. The crab flavor was evident, and the exterior had a nice crunch to it.

Ravioli of the Day – Mushroom ravioli in a rich cream sauce 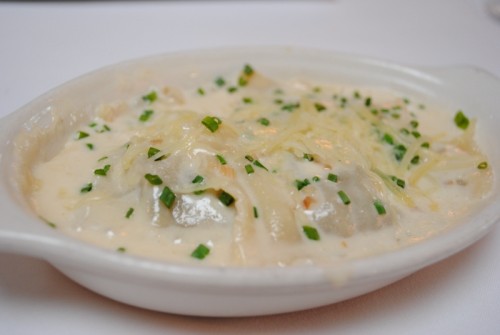 The ravioli was pretty good. The pasta was al dente and had a good flavor. The sauce was pretty rich, but good in small amounts. I probably wouldn’t want an entree of this. 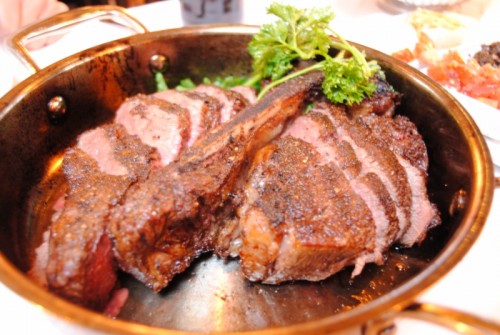 We went with the 40 ounce, as the 24 ounce wasn’t gonna be enough for us.  The steak comes out pre-sliced in a sizzling pan. I’m a pretty picky eater when it comes to steaks, and here are the issues I had with this one:

1. The steak wasn’t really cooked a medium rare. The cooking temperature was too high and, as a result, the exterior half of the meat was a greyish well done, and the interior half was fairly rare.

2. The steak lacked a really beefy flavor, and the strip portion wasn’t too tender. I wasn’t expecting the best steak I’ve ever had, but the quality of the strip loin was pretty unimpressive. It wouldn’t be too hard to beat this at home. The filet, on the other hand, was much better – it was a generous portion and very tender.

As an overall observation, it was kind of odd to notice that the steak had been cooked, at least partially, after cutting. The meat around the bone was well-done, and the slices were lightly cooked on the sliced ends as well. I’m not sure what they did or how this affected the meat, but I thought it was odd. 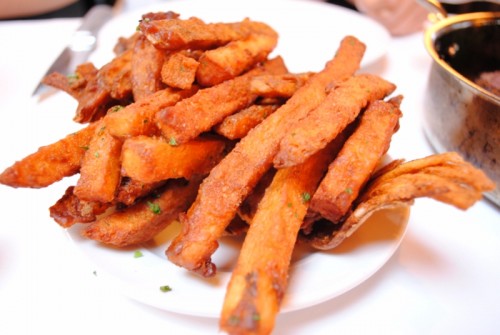 The fries were nicely thick cut. However, they add some sort of batter to these fries and overfried them. In addition, they were underseasoned. 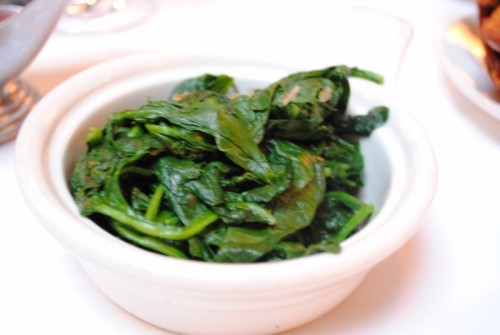 An additional side of spinach rounded out the meal and made us feel a little less guilty about what we were eating.

Having finished our meal at Porterhouse Bistro, we were ready for dessert. My friend had never been to Pizzeria Mozza, so what better way to cap off a meal than with a couple pizzas? 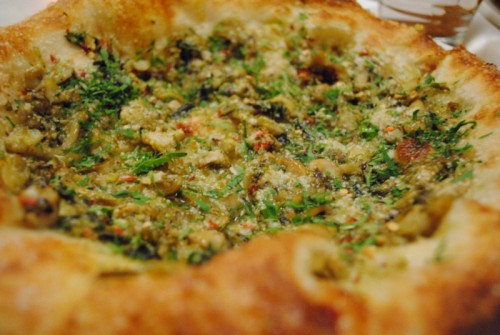 The Ipswitch Clam pizza is one of my favorites. Not too salty and not at all fishy, the clams are a tender and flavorful topping to this pizza with just the right amount of garlic and oregano. 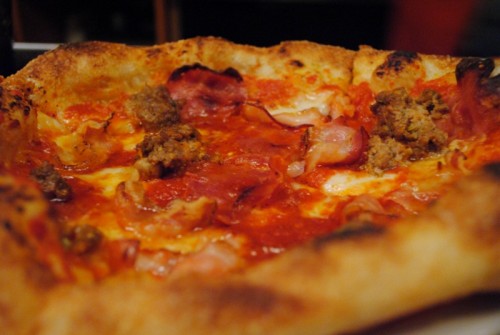 The all meat pizza. Yum. Also one of my favorites, it happens to be a greasy mess of meaty goodness. There was a little less cheese this time than I typically find, but the combination of meats is fantastic. There was also a nice smokiness with one of the meats.

I had ordered two pizzas in the hope of having some leftovers for lunch the next day. Unfortunately, we did eat both and I felt (still feel) like a fatass. Our meal at Mozza was far more satisfying than our meal at Porterhouse Bistro. Overall the meal was a bit of a letdown, but I still think it offers a great value, especially to someone not as picky about their steak.