I purchased the Ad Hoc Fried Chicken kit from Williams-Sonoma a while back. I saw it in the store and immediately had to get it. Nevermind the fact that I had never made fried chicken before, and am slightly averse to frying in a big pot of oil at home – it was Ad Hoc fried chicken, and I had to have it. 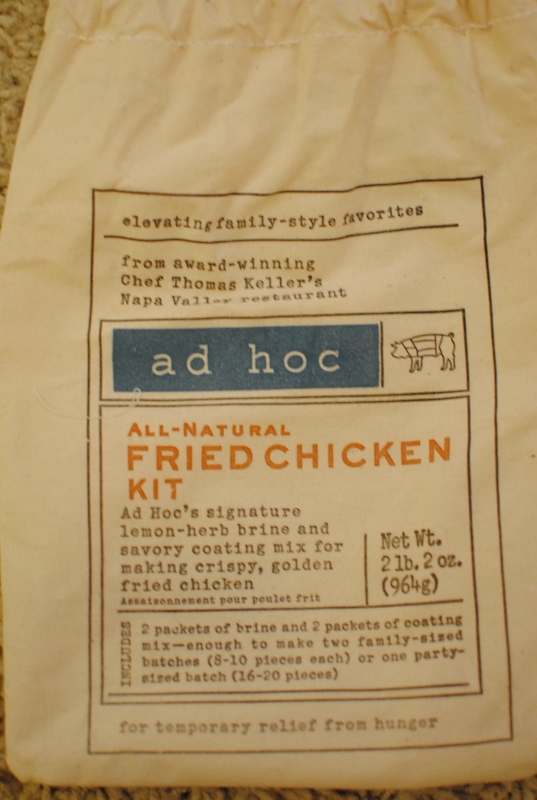 The kit comes with enough brine and seasoned batter for two uses, and I first made the chicken pre-blog. Because I would be using so much oil to fry the chicken, I figured I might as well cook as much as I could, and invite some fried chicken-appreciating friends over and turn it into a bit of a potluck.

First, the chicken. I was able to fit 24 pieces of thighs and drumsticks into the brine, which sat overnight. They were dried, and allowed to come to room temperature. 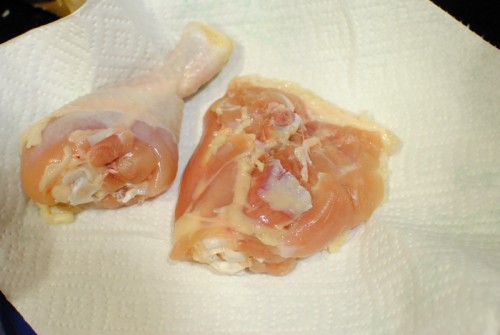 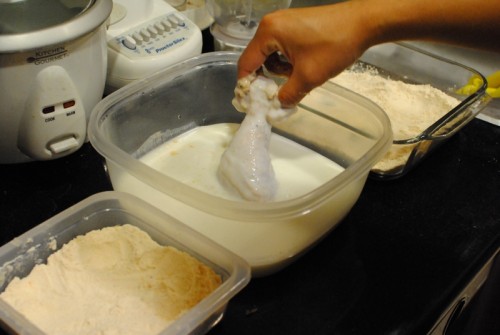 When the chicken was battered, we let it sit for a few minutes to let the batter set. 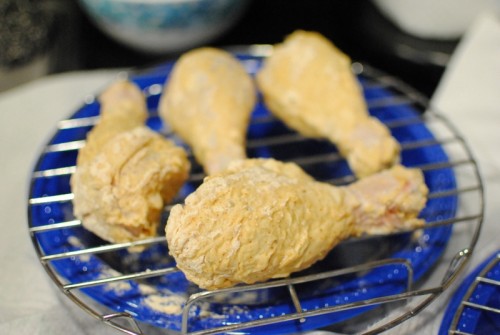 After that, they went into the oil. I started with oil that was approx. 350 degrees, subsequent batches were frying at around 330 degrees. 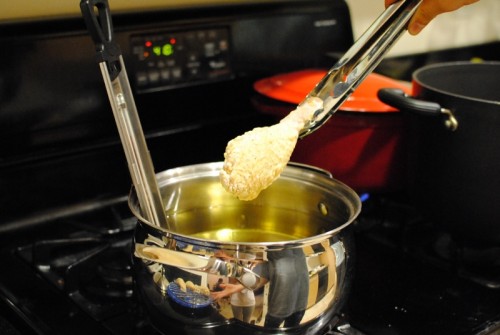 After about 12 minutes, the first batch was done! 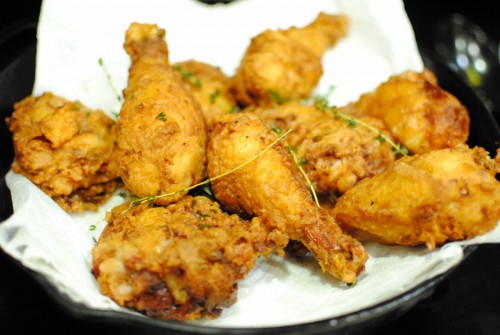 After about 5 batches, all 24 pieces were fried. I continuously put in sprigs of thyme to flavor the oil, as well as to act as a garnish. 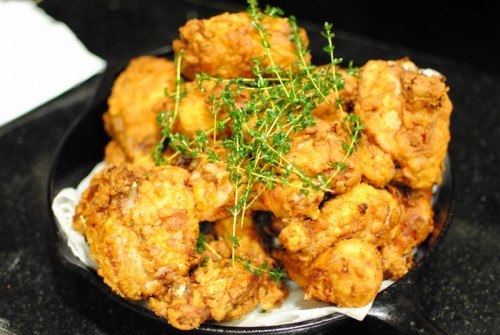 The chicken was pretty damn delicious, if I do say so myself. The exterior was a golden brown; very crispy. But what made the difference was the very flavorful, juicy interior – definitely a result of the brine. Easily some of the best homemade fried chicken I’ve had. While it was a lot of work, and involved a lot of cleanup (all that oil!), it was worth it…though it will probably be a while until I do it again.

Heather baked some jalapeno cornbread as an appetizer/side – luckily, it wasn’t too spicy…but had just the right kick. 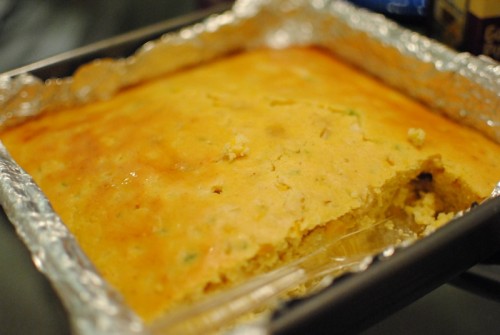 Kristen brought some watermelon, which was quite juicy and delicious. 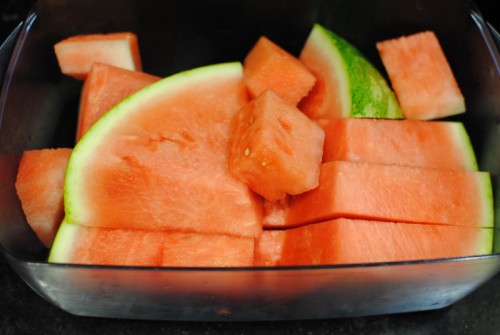 Angelo brought a couple of salads, and James put on his chef’s hat, making baked corn and a homemade crab dip. Unfortunately, I did not get pictures of these. As I wasn’t sure we would have enough food, I had also made a beef stew ahead of time. 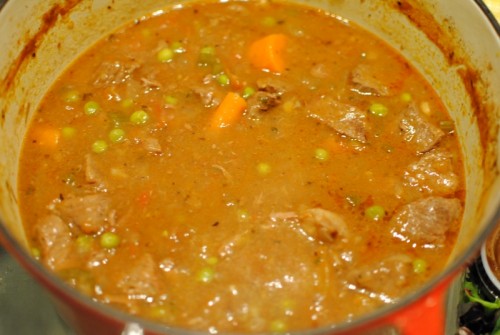 I’ve posted enough times about braising dishes at home, so I didn’t do a step-by-step pictorial. I roasted some cauliflower and broccoli as well. 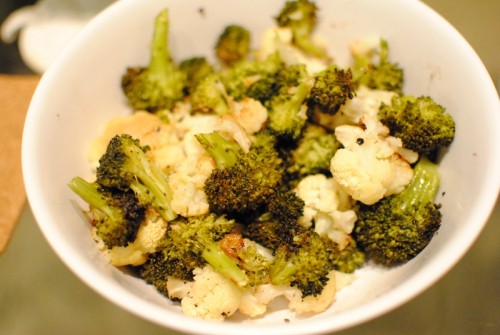 These were cut up, and roasted in my cast-iron skillet with salt, pepper and olive oil.

I also made some mashed potatoes using russet potatoes, butter, beef fat (from the stew) and heavy cream. Unfortunately though, I didn’t get a picture.

Mike and Lilly of LA Beer Hopping were in charge of the beer. 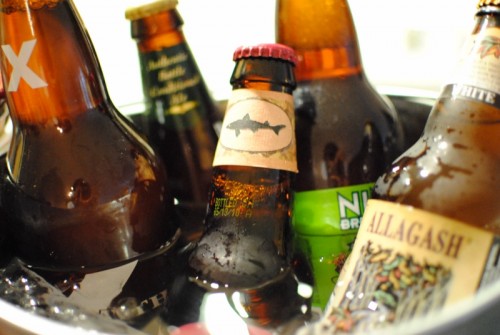 The selection included Dogfish Head 90 Minute IPA, Allagash White, Alesmith X, BridgePort IPA, and a Ninkasi Spring Reign. I threw in a Pliny the Elder for good measure. I thought this was a pretty good selection. The IPAs would satisfy the “hopheads,” and the Allagash White, Alesmith X and Ninkasi beers attracted those that wanted a less bitter, perhaps lighter, craft beer.

For dessert, we had a couple of options. Heather brought a homemade peach/blueberry/raspberry cobbler served warm. 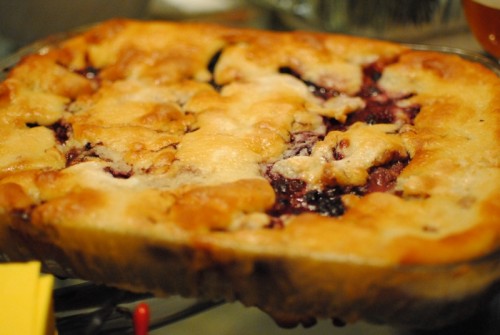 And I made a tiramisu. 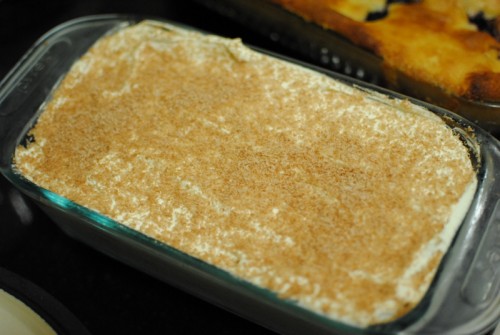 This was actually fairly simple. I whipped up some cream, adding vanilla extract, marscapone, and sugar once it reached the ‘soft peaks’ stage. I layered lady fingers (dipped in a mixture of coffee and kahlua) and the cream mixture, with grated chocolate at each layer.

I was pretty pleased with the meal. It was a lot of work cooking so much (especially all that chicken), but it was a good opportunity to get some people together and enjoy some good food and good brews.