This past Sunday was the last night in Red Medicine’s run at Test Kitchen, LA’s new “pop-up” restaurant. Drawing upon the success of the now-nationwide famous LudoBites’ pop-up concept, the restaurant is well…a test kitchen. There’s no permanent chef; rather, the space is rented out for short periods of time by chefs (typically of upcoming restaurants) who will showcase dishes of a new concept. And somehow, we’ve all nurtured the desire to be their guinea pigs.

The format is unique and could be wildly successful. As long as the restaurant can continually schedule chefs people want to see, the restaurant will be ever-changing, fresh, and most importantly, will  keep people coming back for more. The debut chef for the restaurant is Jordan Kahn, who will helm the upcoming modern Vietnamese restaurant Red Medicine. 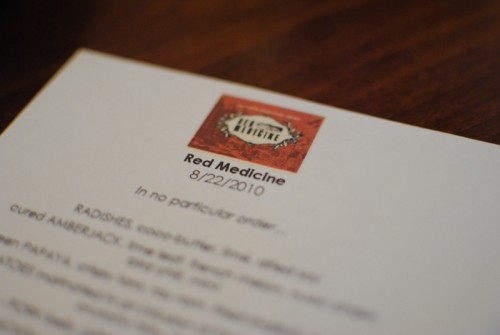 12 dishes were served family style, in “no particular order.” We had an early reservation, and really felt rushed – all 12 courses came out in one hour. 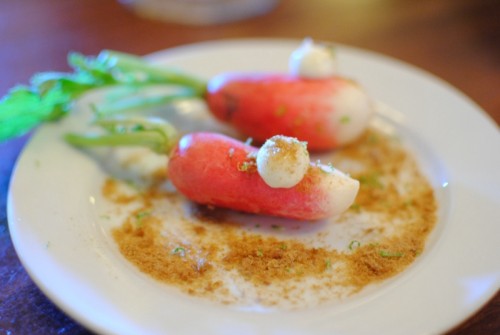 Crunchy and crisp, these were a good starter. I enjoyed the clean flavors. 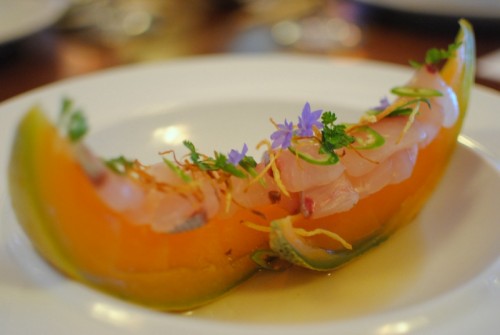 The melon was sliced into pieces, and topped with the fish. Slightly spicy from the chili, though sweet from the cantaloupe, the flavors worked pretty well. 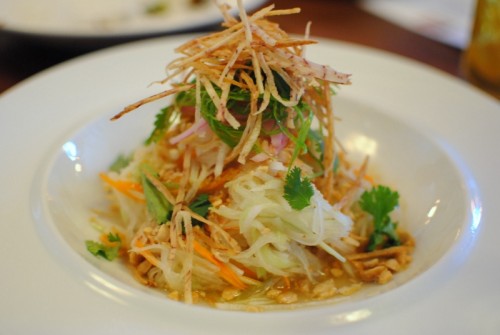 I can’t say I’m an expert in papaya salads, but this was a pretty good rendition for me. Cool and refreshing, with a nice ‘crunch’ in every bite from the papaya, peanuts, and taro. I could eat this all summer.

tomatoes marinated in an infusion of their vines, silky tofu, crunchy tofu, herbs 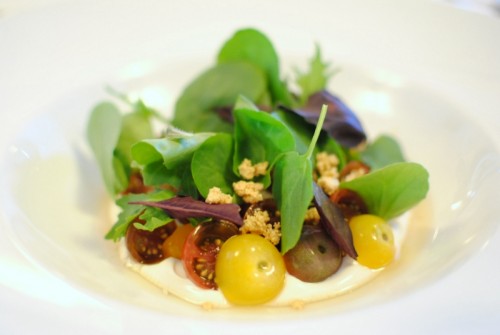 This dish was one of the most interesting of the night for me…kind of an Asian caprese salad. The tomatoes were ripe, juicy and sweet, and the tofu had a very cheesy consistency and texture. The herbs added some more complexity of flavor to the dish. 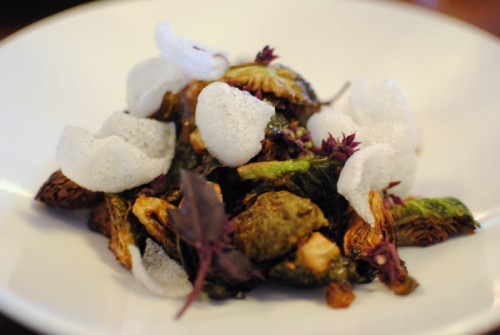 This was probably my favorite savory dish of the night. The brussels sprouts were addicting – crispy and light, with a mild sweetness from the caramelization. I’d love to buy a bag of these and eat them like potato chips! 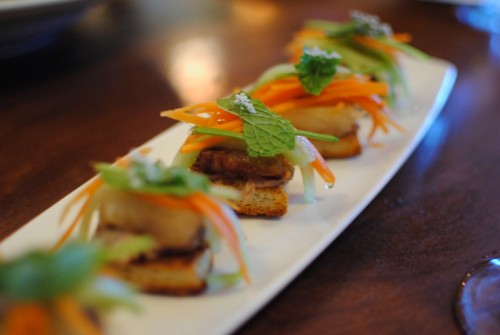 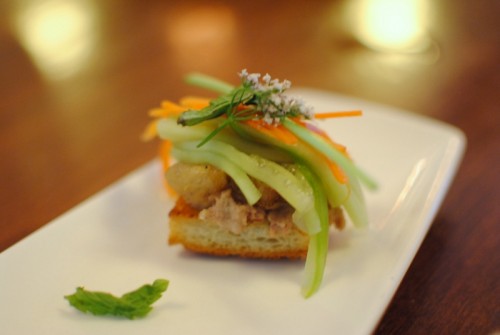 These were essentially mini banh-mi. I got a nice crunch from the pickled veggies; initially, I was thinking there should’ve been more meat. However, I think a traditional banh-mi is supposed to be less meat-heavy, and this was more along those lines. I wouldn’t say there was any ‘modern’ spin to this dish, other than it being miniaturized. 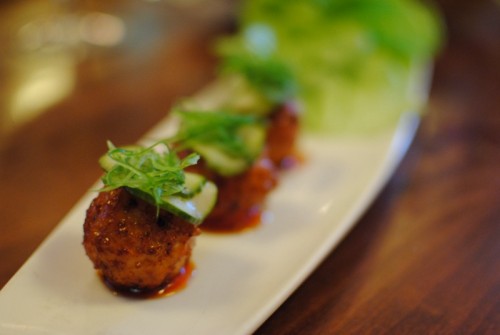 These dumplings, more like meatballs, were a bit dense and dry for me. I think white meat was used; I would have preferred a dark meat to lend more fat and juiciness. 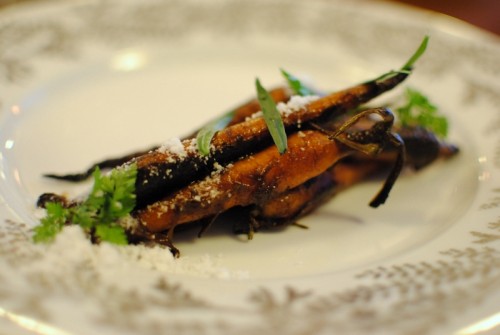 As the dishes come out in “no particular order,” I don’t think dish order was a big focus. However, as I felt like we were gearing up into the “entrees,” I would’ve preferred this dish earlier in the meal. I like black bean sauce, however I’m not too sure it worked with me on this one. Black beans have a sweetness to them, and so do the carrots; and it just didn’t meld too well for me. 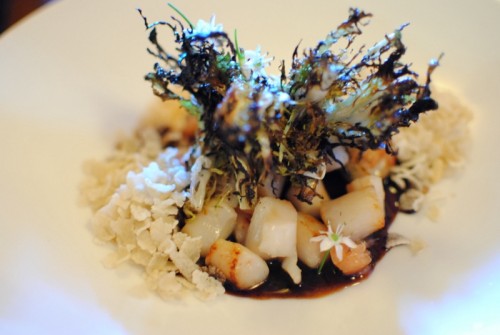 The tamarind syrup was all overpowering in this dish. The small bay scallops didn’t hold up very well to the strong sauce. I appreciated the texture from the puffed tapioca, but it didn’t add any flavor notes. I loved the charred frisee however, reminiscent of the brussels sprouts. 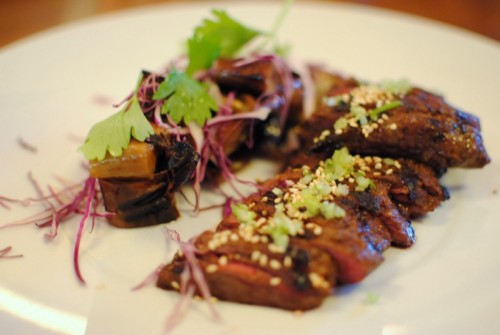 As long as you cook it medium-rare to medium, I find it’s hard to mess up a flank steak. This was no exception with tender chunks of meat and good flavor. I appreciated the eggplant as well. It was mushy, and I like it that way. 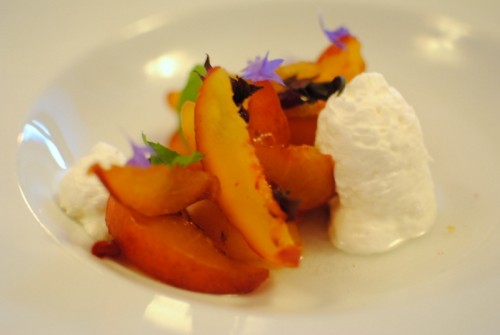 I thought the peaches were delicious in this dish, alone. Outside of the creme, I don’t think the ingredients added too much to the dish. But I loved the sweet, ripe peaches.

Jordan Kahn made his name as a pastry chef, and it really showed in this dish. The peanut croquant was really reminiscent of a Reese’s Peanut Butter Cup, but crispy. The chicory has a coffee-like flavor; combined with the coconut, peanut and touch of thai basil – the flavors and textures were really good.

In all, there were some hits and some misses but overall, my impression of the food was positive. Where I probably disagreed most was with the portions and the insanely quick pace to the meal. I’ve never had 12 courses in the span of one hour; I felt like I was just trying to keep up for most of the meal, so that they could fill the table for a 7:30 reservation (we sat down at 6). Most of the dishes pictured were for a party of 5 – thus, dishes were good for one or a few bites. At the end of the meal, I felt like I was still waiting for the entree to come. However, I can’t fault that $40 is a pretty good price to try 12 different dishes, but we weren’t allowed to order additional dishes of anything once the meal had run its course.