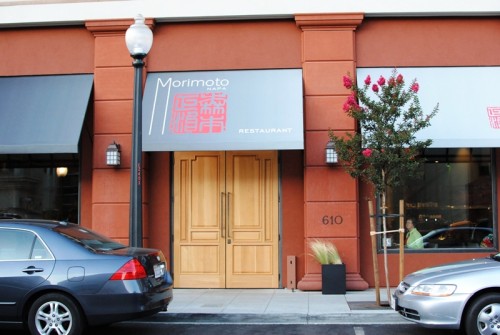 Iron Chef Masaharu Morimoto’s first venture on the west coast is in the small town of Napa in the heart of wine country. Given the slower, leisurely pace of this small town, I was expecting a rather quaint restaurant. I was mistaken. The restaurant is bustling – the lounge, bar and dining room were packed to the brim with customers, with staff carving dizzying paths through these three areas and the kitchen. 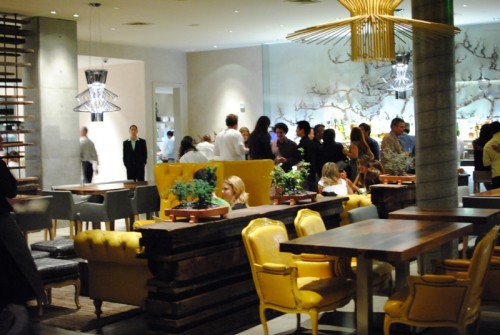 Before I look like an idiot, these images were taken at the end of the night. 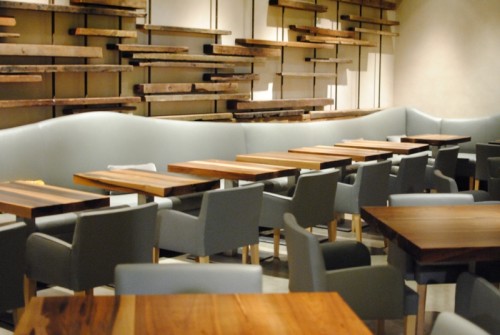 Morimoto Napa is not a traditional Japanese sushi house….kind of like how Morimoto not a typical Japanese chef. This place is trendy – the decor and crowd instantly reminded me of something like Geisha House, Koi or Katsuya in LA. Considering Morimoto’s background of being head chef at the famed Nobu in New York, I could see the parallels in decor. 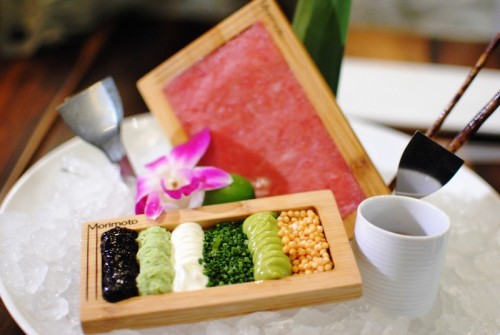 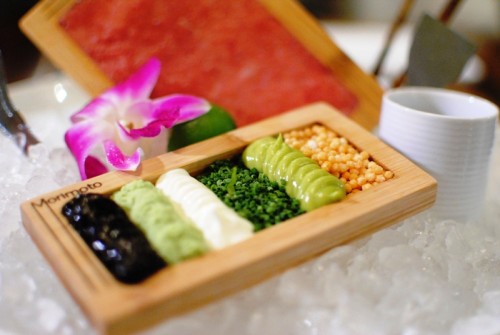 This was presented in a grand fashion, in a large bowl of ice. This has to be one of Morimoto’s most famed dishes – chopped up toro with a selection of accompaniments to help yourself to.  From left to right, these were: nori paste, wasabi, creme fraiche, chives, avocado and rice crackers. It’s a fun and playful dish, and each of the accompaniments were quite good. However, my favorites were the nori and (surprisingly) the avocado – the rice crackers were perfect to add a bit of texture. 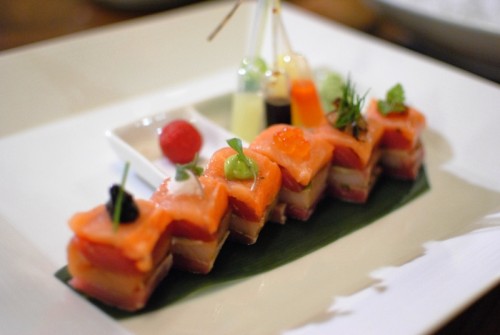 Layers of smoked salmon, hamachi, eel, chu-toro, eel and oyster mushrooms were combined to make these sashimi bites. Accompanying them were a number of sauces including arugula oil, yuzu vinaigrette, eel sauce, and red and yellow pepper sauces. I’m often not a big fan of maki rolls that combine a variety of fishes, as you can’t distinctly taste any one fish. This dish followed those same traits, however it was pretty tasty. 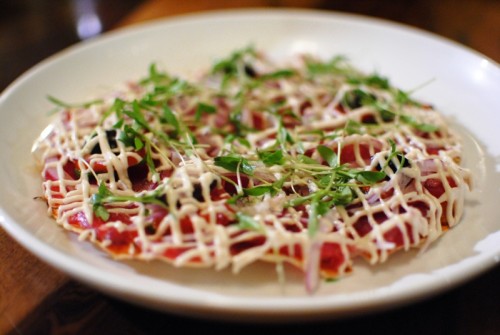 A pretty unique dish here with tuna as a featured ingredient in this raw “pizza.” The flavors were pretty good here; the jalapeno, while prevalent, wasn’t overly spicy. 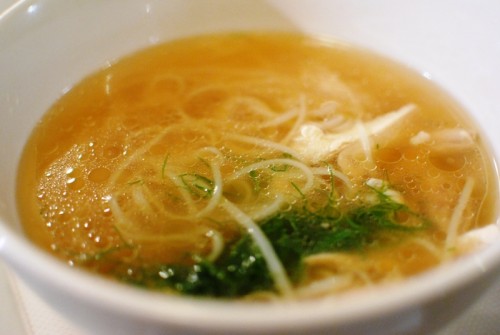 Did I mention we were sitting outside with the temperature in the low 50s? A bowl of ramen soup was in order. This ramen was really more like a Vietnamese pho ga, with its hearty chicken broth, shredded chicken, and rice noodle (not a common type of noodle for ramen, as far as I know. Having said that, it was a deeply satisfying and comforting bowl of chicken noodle soup. 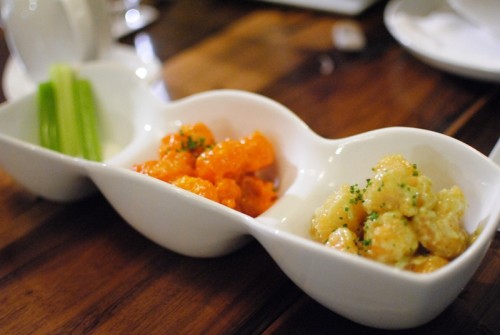 I remember this dish from my trips to Nobu, but this variation is a little different. Plump and juicy pieces of perfectly-fried shrimp were served in two sauces. Both sauces were good with just the right amount of heat – I preferred the more complex flavor of the kochujan over the wasabi. 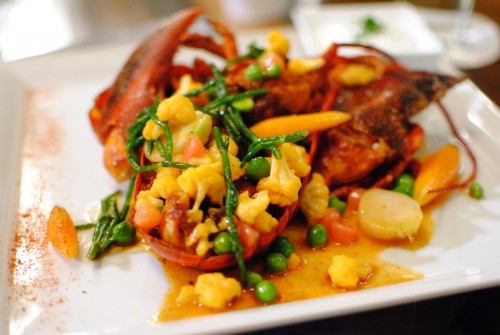 This whole roasted lobster was an impressive thing on a plate. However, I found the tail meat to be rather mealy, though the claws were succulent and delicious. I thought the garam masala was rather one-note; the lemon creme fraiche was good in tempering the mild heat of the curry, while adding some acidity to the dish. 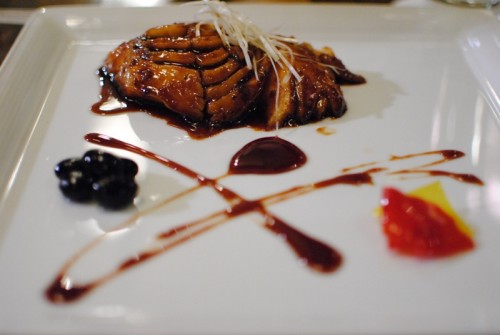 Most fusion Japanese restaurants seem to have some sort of variation of this dish on their menu. This cod really reminded me of Roy’s (Yamaguchi) version…which is a good thing. The fish was moist and flavorful with a really melt-in-mouth texture. 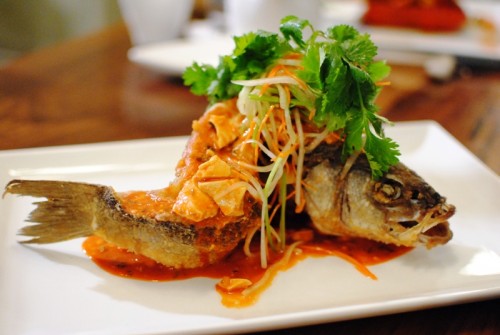 I love the presentation of a whole fish, especially when deep fried. The fish was very moist with a rather mild flavor. The spicy tofu sauce was rather overpowering, though, for such a light fish. 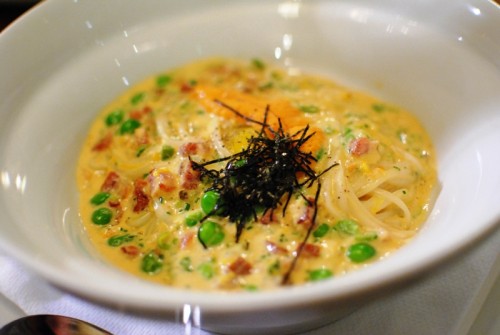 This was definitely a ‘fusion’ dish – here, Morimoto is putting a Japanese spin on the classic Italian pasta. Interestingly, the udon noodles weren’t very thick (thinner than a linguine), and closely resembled those in the ramen. The creamy carbonara sauce was rich and delicious – a solid take on the classic. There was only one small piece of uni included, but it added a nice briny flavor to the rich pasta. 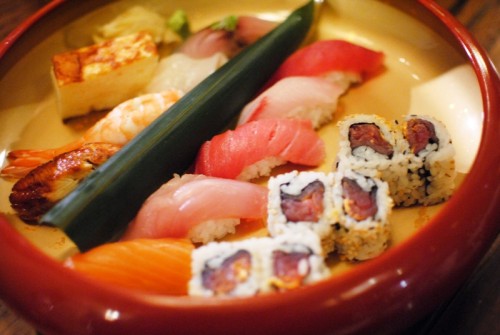 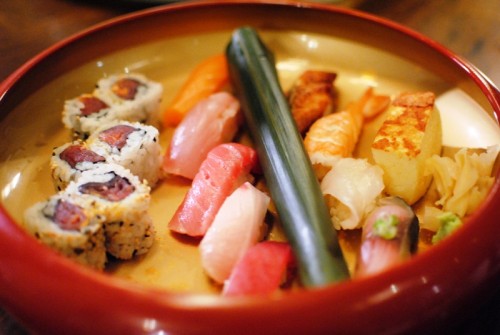 Full as we were, we couldn’t leave without trying some sushi. We opted for one of the “chef’s combinations” which included spicy tuna, sake, kanpachi, chu-toro, hamachi, maguro, unagi, ebi, mirugai, and aji. What a disappointment. The sushi was rather pedestrian – it didn’t have the glistening sheen of fresh-cut fish, and had almost a dry mouth feel. I was missing the tender, melt-in-mouth feel from most of the pieces. 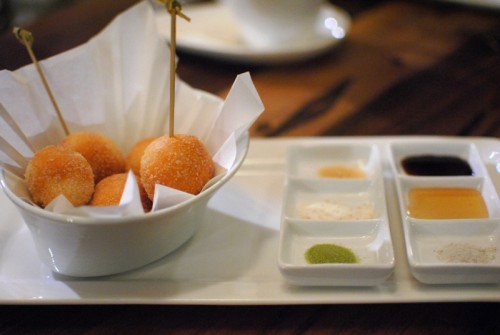 For dessert, we had doughnut holes with a variety of dipping sauces, including molasses, lavender honey, lavender sugar, soy sugar, powdered green tea and ginger sugar. These bites were warm and fresh out of the fryer, and the sauces brought back some of the playful customization we saw in the first few dishes.

In all, this was a solid meal. Good, but not great. I did not expect to have a mind-blowing experience here; rather, I wanted to try some of the interesting non-traditional dishes Morimoto has to offer. Outside of the surprisingly poor sushi showing, the dishes demonstrated some creativity and strong execution. I can’t say I anticipate being back (there are so many other places I want to try in the Napa Valley), though I do look forward to trying Morimoto’s new venture (his first non-Asian one) in Los Angeles.