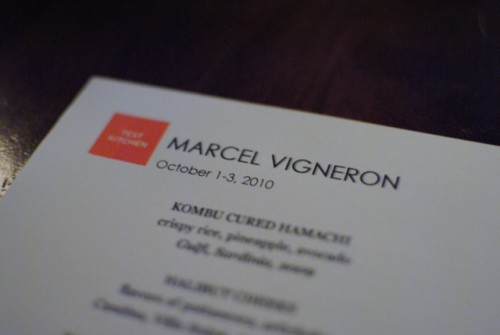 Best known as Top Chef season 2’s runner-up to Ilan Hall and the chef everyone loved to hate that season, Marcel Vigneron has been cooking in LA ever since the show ended – most notably at the Bazaar with fellow Top Chef alum Michael Voltaggio. Vigneron clearly showed that he was a talented chef on the show, and I’ve been interested in trying some of his food ever since. When we found out he would be doing a short stint at the Test Kitchen, I jumped at the chance. Fellow bloggers dining at this meal were Christina of food, je t’aime, Famished Foodie and, of course, Kevin of kevinEats.

First, an amuse bouche from the kitchen. 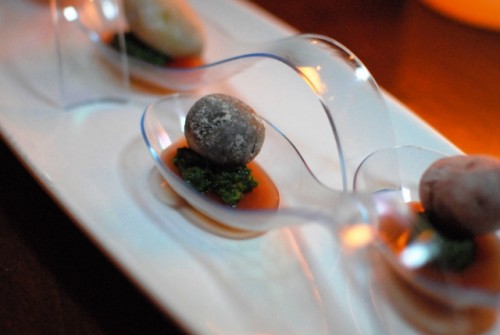 These were potatoes in a tomato gelee with a little bit of parsley, cilantro and basil chlorophyll. Pretty interesting – the potatoes were nice and creamy, while the tomato added a little sweetness and acidity.

In addition to the main menu, two appetizers/bar bites were offered on this night. 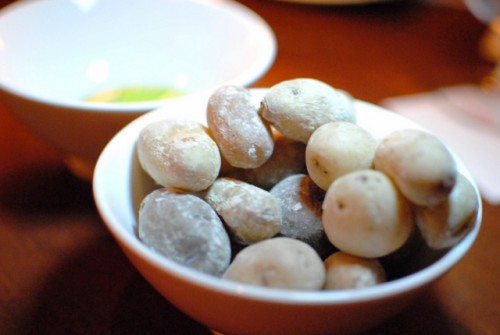 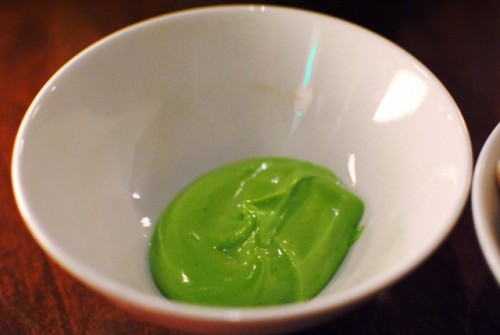 I loved the brilliant neon green of the mayo. The potatoes were soft and creamy (same potatoes in the amuse bouche), and perfectly salted. The mayo had a leafy-green vegetable flavor to it, which I thought was nice with the earthy potatoes. 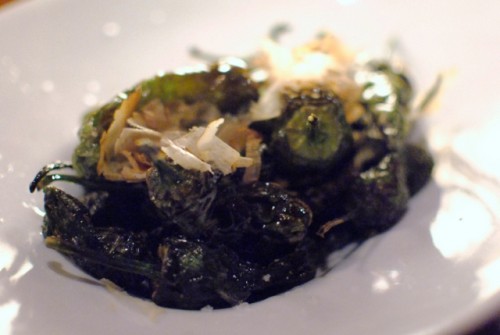 These shishito peppers were a bit spicy for me. Okay, way too spicy for me. Though, I thought the flavor of the roasted pepper was nice before the onset of the heat. The bonito wasn’t really apparent. 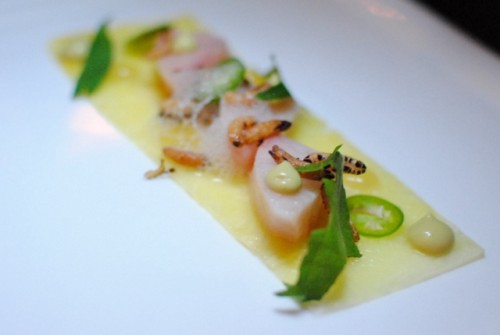 This was the first dish of the tasting menu. The hamachi had a nice clean flavor, with some sweetness from thin slices of pineapple (on the bottom). Really quite good. The rice crackers on top added a wonderful texture to round out the dish. 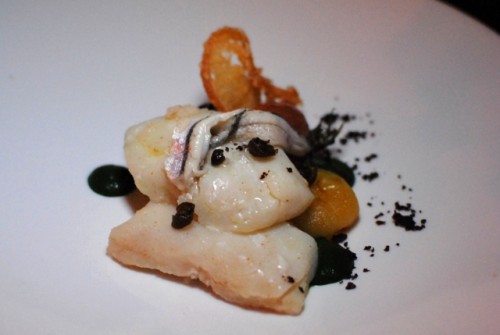 The cheek of a fish is often one of the best parts. In this example, it was cooked very well, leaving it tender and moist. However, the rest of the components (parsley sauce, marinated artichokes, anchovies, roasted and caramelized cipollini onions, kalamata olive powder) weren’t there for me. I found them hard to reconstruct all into one bite, and some of the flavors (including the anchovies) were rather overpowering. 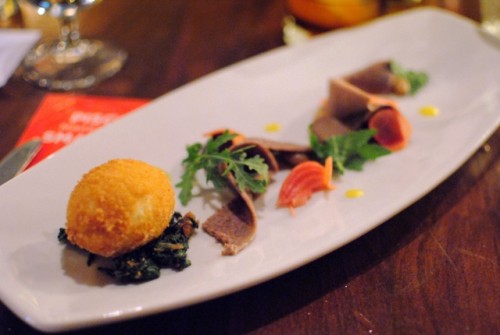 It was a bold move to have beef tongue as one of the main courses. Definitely not the most approachable part of the cow, it can be pretty chewy if not prepared well. This wasn’t the case here – the tongue was very tender with just that subtle beef tongue flavor (it’s hard to explain, but I think you know what I mean if you’ve had it).

The egg, cooked for “six and a half minutes” and fried in pankow, was marvelous. With its rich and creamy yolk interior, and crispy breaded exterior, this was one hell of an egg. 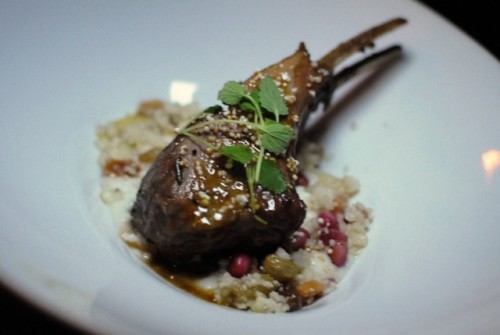 This lamb, from New Zealand, was cooked a little bit on the rarer side, which made cutting with a butter knife pretty difficult. However, I thought it had a nice lamb flavor without being too gamey. The cauliflower, made into a couscous-like consistency, was interesting, though it didn’t have a strong presence. 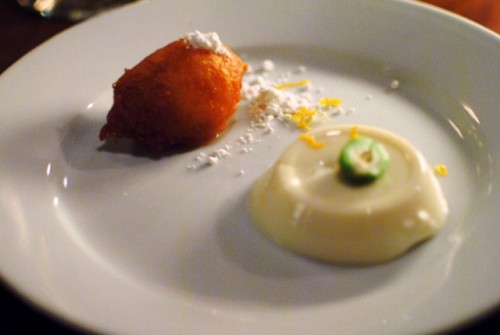 I enjoyed the crispy light fritter; here it was paired with a very smooth panna cotta. Just a little sweet, the textural contrasts were very nice. 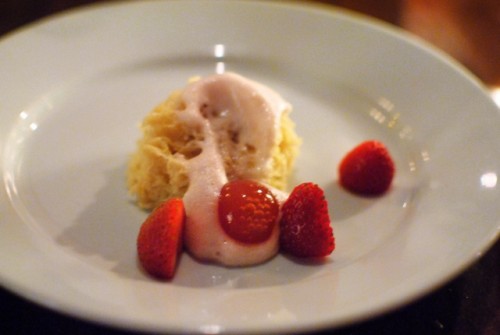 I didn’t care so much for this sponge cake. I found it rather dry, with an oatmeal or cereal-like flavor. Unsweetened cereal. The strawberries were a nice touch, but I wanted a little bit more sweetness and moisture out of this dish.

Overall, there were some hits and misses in this meal. I came in with pretty high expectations, so I’d probably have to say it was a little disappointing. Still, Vigneron’s dishes displayed some really interesting techniques and flavors that clearly showed he is a very capable chef. It will be interesting to see where he will be cooking in the future.

Some guest chefs were also in the kitchen this night! From left to right: Alex Reznik, Walter Manzke, and Marcel Vigneron. 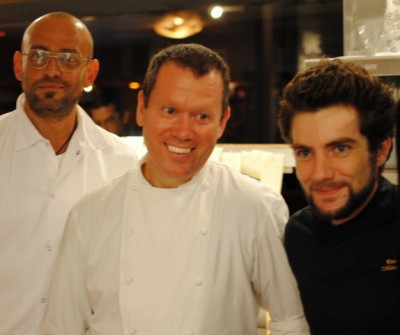