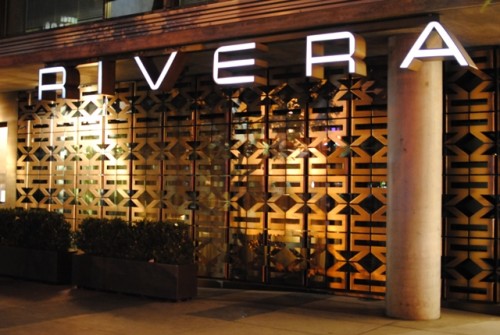 I’d been to Rivera once a while back. It was a weekday lunch, and I remember the delicious and moist fish tacos, as well as generously-sized kurobuta pork short ribs. I’ve been meaning to go back to try dinner out, but I just haven’t had the right “push” to get me there.

When I was tasked to pick a restaurant for eight of us for a DineLA meal, Rivera immediately struck me as a candidate. With its notable tequila cocktails from bartender Julian Cox and rather unique “upscale Latin” menu, I thought this would be a fine choice.

Rivera’s kitchen is open to the street via large windows. I always enjoy being able to see what’s going on in the kitchen on my way in. 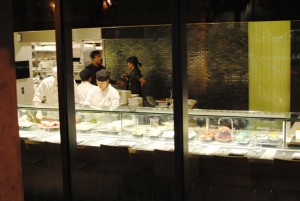 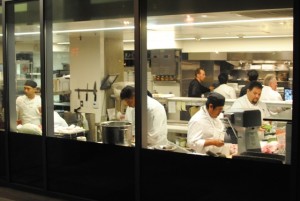 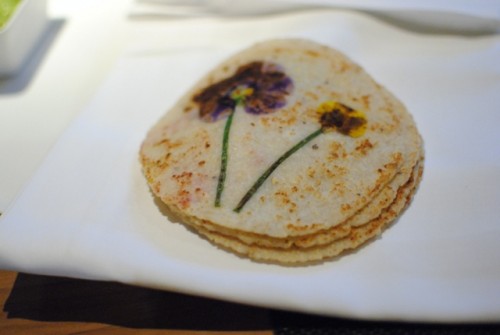 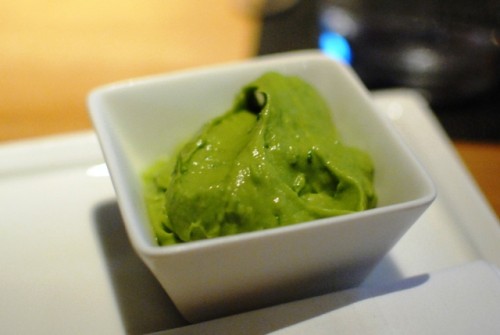 This is not part of the DineLA menu, but I had to try it. This is one of the most notable dishes offered at Rivera. During my past lunch visit, I had asked for these and was told they were only available during dinner. So, I finally got to try them – and I was not disappointed. The tortillas were beautiful, and the “Indian butter,” really like a smooth guacamole, was wonderful. 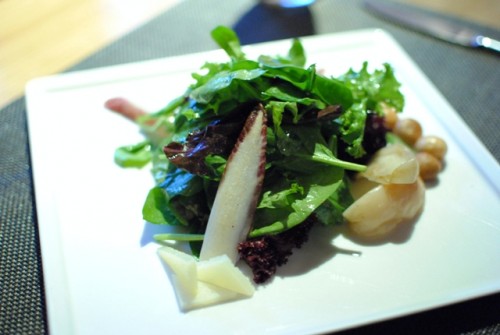 I didn’t try this salad, but heard it was a good salad – though it wasn’t anything special. 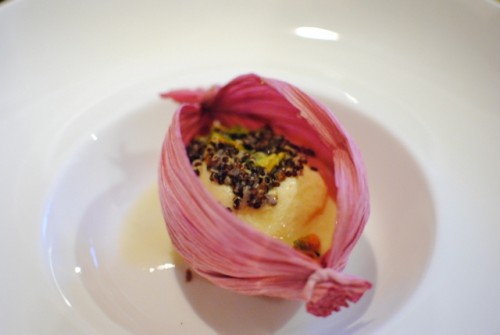 This warm flan was creamy and custard-like, very smooth. The corn added a nice sweetness, and the black quinoa added a little bit of texture to the dish, making this a definite favorite. 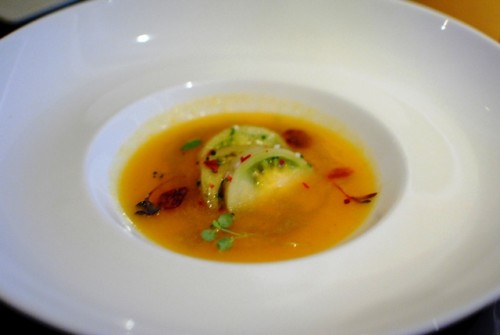 This was a fairly standard gazpacho. Solid. Not overly sweet nor overly acidic. 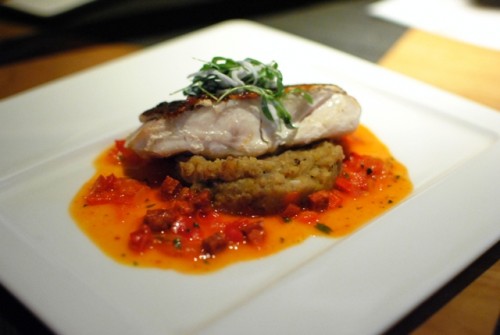 This was my first time having mofongo, in my opinion, one of the best food words to say out loud. It’s basically fried plantains, mashed with garlic, spices, oil and often fried pork skin or bacon. The sea bass was cooked very nicely, with the skin crispy and having a nice smoky flavor. The mofongo was subtly sweet, which was rather nice with the bass, a relatively heavier fish. 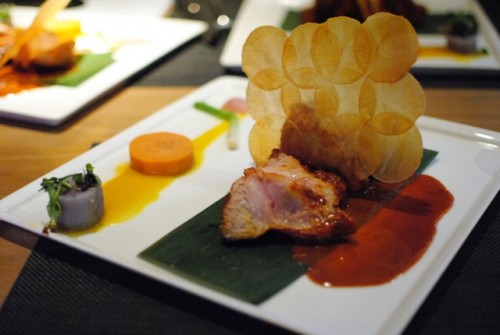 My first piece of this was way too fatty (greater than 50%). However, subsequent slices were quite nice, very moist and tender. The pork flavor was quite good, though the sauce did not have a lot of depth. I found the potato crisps to be crucial in adding a textural element to the dish. 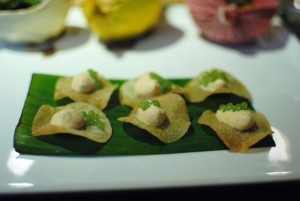 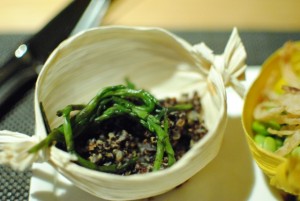 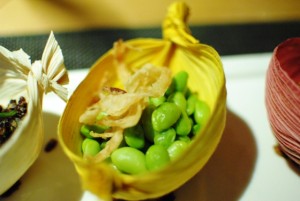 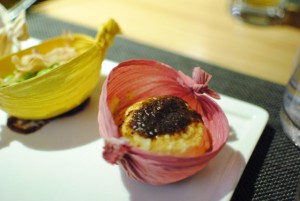 I didn’t get a chance to try the vegetarian course, featuring a variety of fresh vegetables. 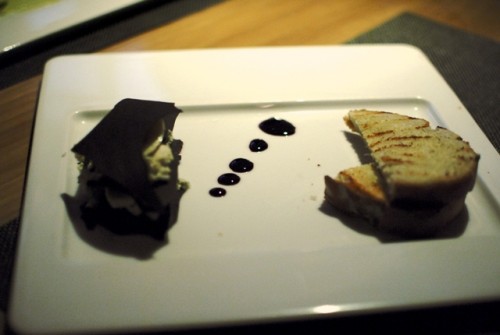 Unfortunately I didn’t get a good picture of this dish. It was a cheese course dessert featuring dark chocolate, bananas and blue cheese with toast. It really didn’t work for me, as the blue cheese was very overpowering. 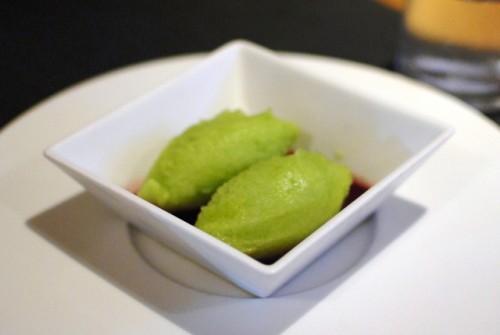 Interesting dish. I thought the poblano chile sorbet would be too spicy for me, but it wasn’t. The heat was present but mild, and the port syrup added a sweetness to temper the heat. Nice! 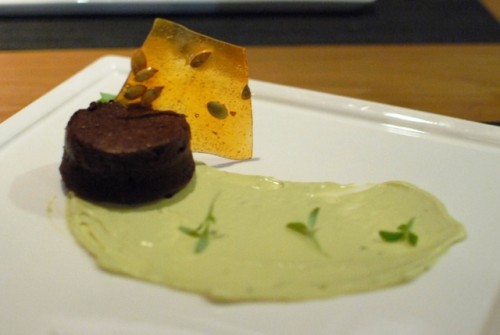 I’m actually not a big fan of spiciness in my desserts. This one instantly reminded me of LudoBites 5.0’s chocolate cake with spicy olive oil. The cake itself was good, with ancho chiles adding some heat. The avocado mousse was an interesting component of the dish, but I found myself somewhat bored after a few bites.

In all, it was a solid meal at Rivera. I really want to love Rivera, but I can’t. There were some great dishes, including the flan and the pork, but there were some dishes I didn’t enjoy so much. However, I will continue to follow Chef John Sedlar’s movements (restaurant Playa opening later this year) and wouldn’t mind coming back to Rivera at some point in the future.