I’ve tried Ricardo Zarate’s cuisine once before at his restaurant Mo Chica. I enjoyed my meal there, which was centered around traditional Peruvian dishes.   Zarate has been one of the hottest chefs in LA in 2010, so I’ve been itching to try more of what he has to offer. He’s been spending a lot of time at the Test Kitchen, so it’d be fitting that I try at least one of his Test Kitchen stints. I’d heard that he had recently spent some time staging at various restaurants, and wanted to show off a little bit of what he’s learned. Sounds good to me. I’m glad I came, as this was one of the strongest meals I’ve experienced here.

Four “bar bites” were offered on this night, and we tried each one. 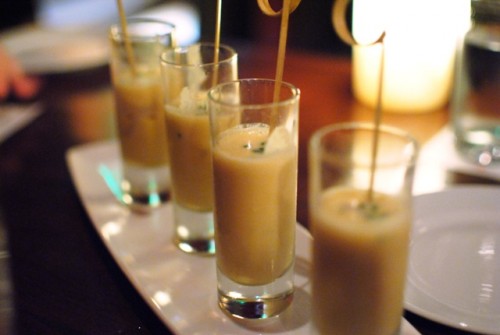 The seafood was tender and “cooked” perfectly. Mo Chica has some of the best ceviches in the city, so this was no surprise. The accompanying broth was subtly tart and subtly spicy, and I thought it paired well. 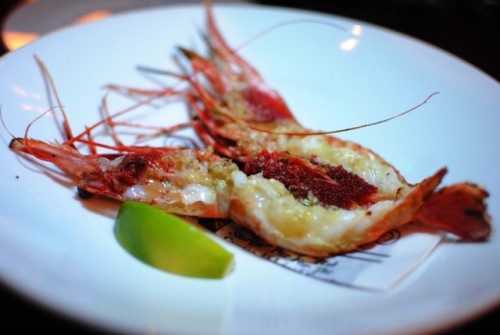 It’s hard to go wrong with these local spot prawns (overcooking them would be one way that comes to mind).  These were not overcooked at all; instead, they were moist and succulent. The yuzu kosho was a nice accompaniment, adding just a touch of heat, and the lime juice added some citrus to go along with the sweetness of the shrimp. 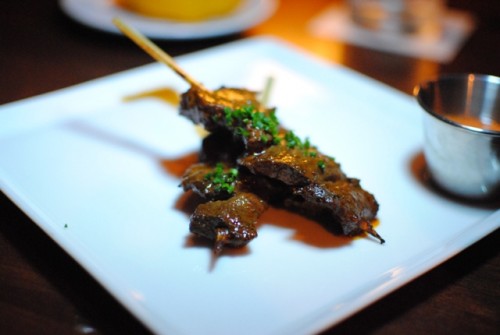 Here we have beef heart skewers. Delicious. While the marinated meat was very flavorful on its own, the mild pepper-based sauce added just a little something extra to the meat. 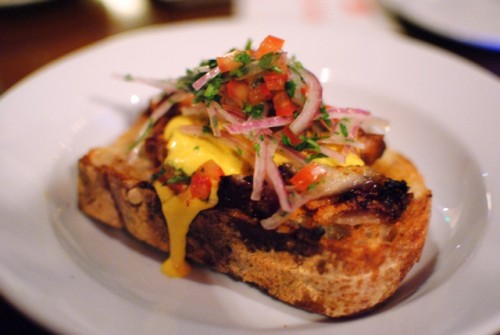 There were a lot of components to this dish, and I wasn’t sure how it was going to work out. There were many crispy textural parts – the toasted bread, the pork skin and the pork belly. I enjoyed the crunchiness that all three of these provided, and the feta cheese, tomatoes and onions added a little acidity and extra flavor.

The “bar bites” were actually quite a bit of food; next came the main tasting menu. 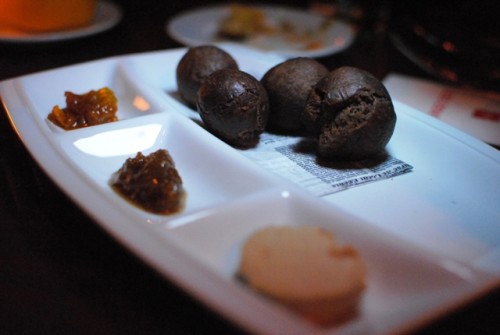 The bread was served warm, though I found it a bit dry. I did enjoy all of the accompanying spreads though, with the fig compote being my favorite for its fruity flavor and sweetness. This bread dish was paired with the following soup. 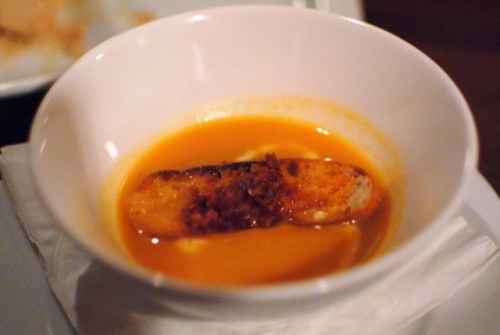 Small bits of chorizo topped this dish, which was a soup based on the rocoto pepper. The pepper’s flavor was similar to a bell pepper. The soup wasn’t too spicy at all, yet had a nice sweetness. The chorizo added a nice depth of meaty flavor to this. 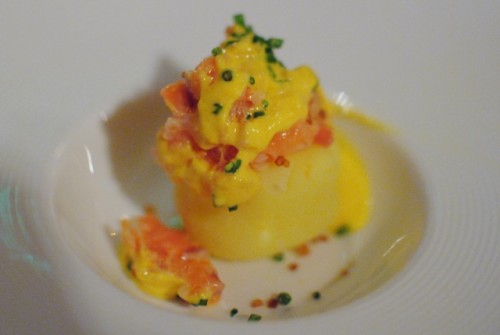 This dish tasted a bit different from what I expected. The salmon topping actually resembled a similar flavor to a spicy tuna roll. The yukon gold potato was tender and soft, adding some body to the dish, while the crispy quinoa added the texture. Quite nice. 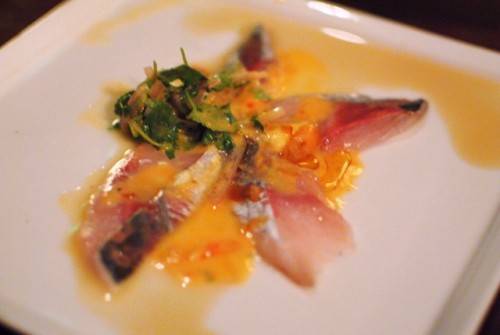 The fish here was Spanish mackerel. The fish was tender, and I got a nice crunch from the bits of raw onion. The lemon sauce added some much-needed citrus, while the garlic lended a little flavor, without being overpowering. 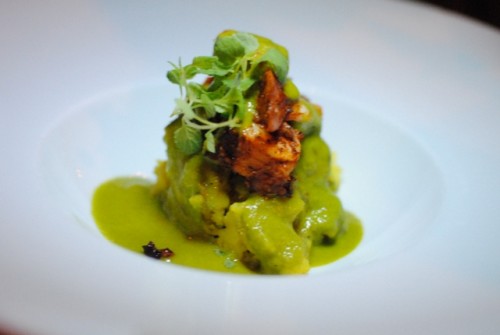 The octopus, cut into chunks, was very meaty and slightly chewy. The roasted potatoes were slightly mashed, which turned out to be a nice accompaniment. As for the sauce, tofu has a fairly neutral flavor, so it wasn’t too noticeable. However, it did add some body to the chili sauce. 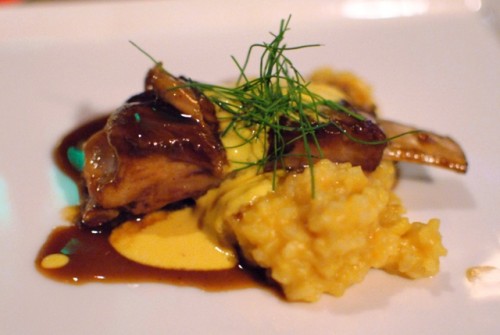 This was one of the best dishes of the night for me.  So tender, these slid right off the bone. The overall dish reminded me of the lamb shank at Mo Chica, which is delicious. Tender and flavorful, I wouldn’t mind eating a large plate of this lamb. The risotto was creamy and cooked well. 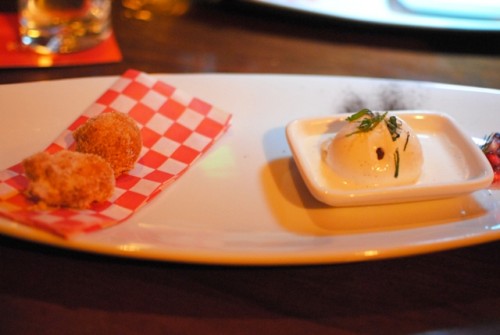 Lastly we finished off with dessert. Hard to go wrong with donuts and ice cream. I thought the donuts were executed well, though I probably couldn’t have picked out the sweet potato and pumpkin flavors. The vanilla ice cream, however, was exceptional. It was rich and creamy, with a really nice vanilla bean flavor. Hell, if Zarate opens up an ice cream shop, I’m buying my vanilla ice cream from him. We jokingly (sort of) contemplated asking for a pint of this ice cream to go.

I thoroughly enjoyed this meal. Zarate’s Mo Chica focuses more on traditional Peruvian influences; here, he was able to expand a little bit to show off some versatility. Still, this meal centered primarily on Latin flavors (I don’t think Zarate will stray too far from it), but the flavors were strong and the execution was spot on. This was a very good meal, and I look forward to seeing what Zarate comes up with next. 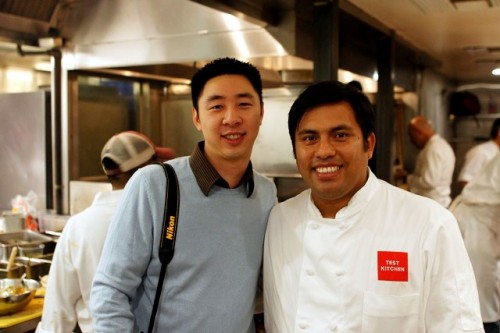