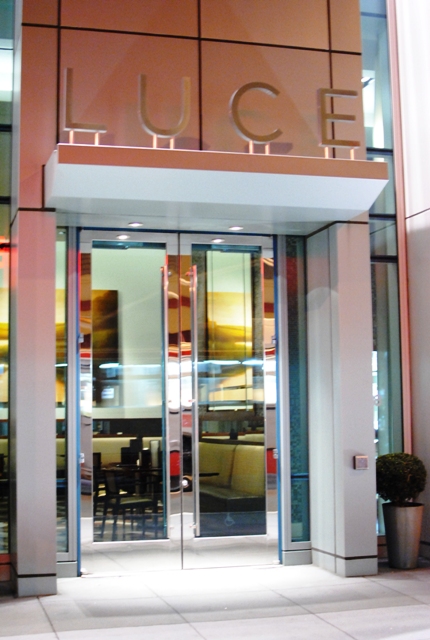 One of the chefs I was most highly anticipating at Test Kitchen was Dominique Crenn. Unfortunately, her sole Dec. 5th appearance conflicted with the finale of LudoBites 6.0, which is where I ended up dining. However, I stumbled upon a happy coincidence – BlackboardEats had a 30%-off promotion to Luce (where she is executive chef) just as I would be in town. Score!

Luce was named as one of the best new restaurants in America by Esquire when it opened in 2008, and first garnered a Michelin star in the 2010 guide (which it retained in 2011). With a victory over Michael Symon on Iron Chef America, the buzz surrounding Crenn has never been greater. As a result, she’s opening up her own restaurant (Atelier Crenn) in mid-January, leaving her position at Luce in doubt.

This may be one of the last meals Luce serves with Crenn as executive chef, and it was a strong one. We started with an amuse from the kitchen. 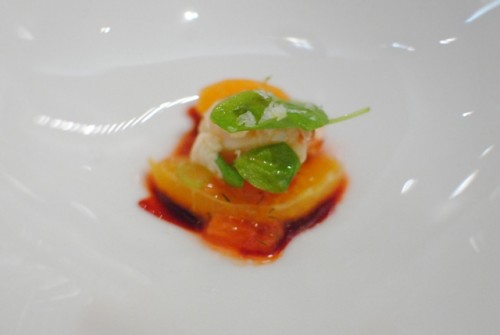 I enjoyed the slightly tart citrus (clementines and grapefruit) paired with the sweet lobster – promising start to the meal.

No tasting menus are offered on Sundays or Mondays (something I didn’t see publicized anywhere, not even on the menu), so we opted for a selection from the a la carte menu. 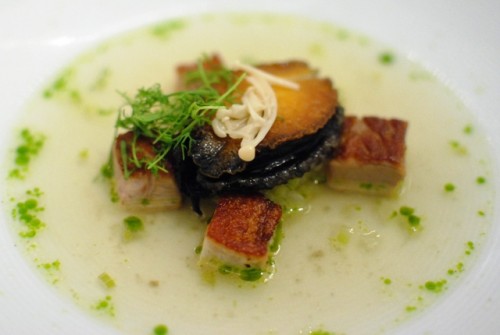 The abalone was cooked perfectly, leaving it quite tender. The pork belly was pretty lean (which I like), yet tender with a crispy exterior. I enjoyed the pork-abalone combination. The broth, with yuzu kosho and enoki mushrooms, was just…in a word…addicting. Excellent dish. 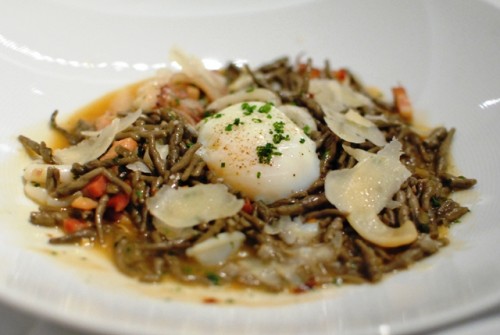 I found this dish to be strong as well. The al dente pasta was combined with tender calamari, the meatiness and smokiness of pancetta, and the richness of an egg. We were instructed to stir everything together – the result was a layering of distinctive and delicious flavors. 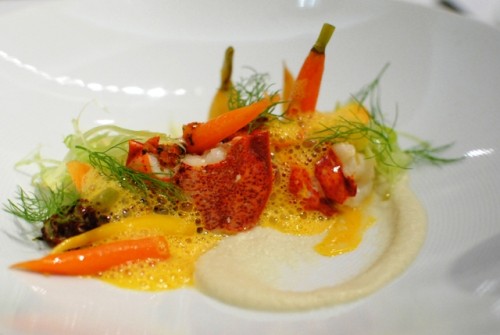 The lobster was cooked well, and I enjoyed the fennel’s complementary flavor. The quinoa was executed well, and served as a nice accompaniment. 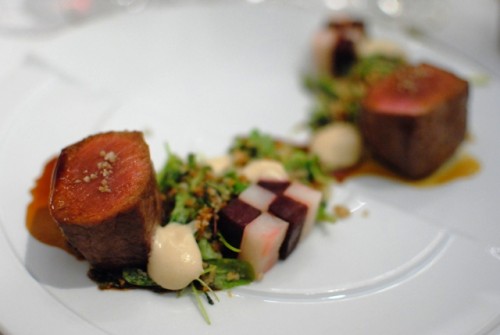 The venison was cooked sous vide yielding a very tender piece of meat. The mosaic of daikon and beets was a nice presentation, though I didn’t think it added a whole lot of flavor. However, the bulgur salad and coffee did add a lot of flavor – yes, coffee. I thought the coffee-venison combination was pretty bold and worked well.

This was the classic chocolate and raspberry combination. The semifreddo was smooth and creamy with a good chocolate flavor. I didn’t think this was outstanding really, but was a little bit of a letdown considering the strength of the previous courses. 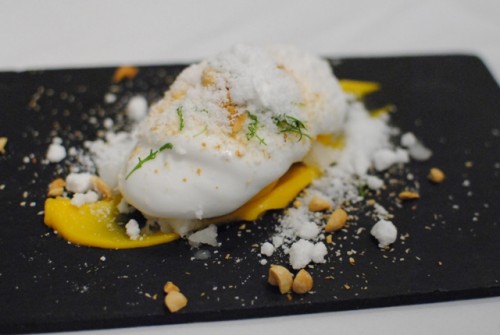 This was a really light dessert, which I appreciated. The coconut was like snow – light and airy, and the coconut and mango flavors were both evident and paired well.

I thought this was a pretty strong meal. The desserts were just okay for me, but the appetizers and entrees were very good. The restaurant was surprisingly rather empty on this night; it’s unfortunate that more people aren’t enjoying this cuisine. The restaurant will undoubtedly change as Crenn transitions to her new project (whether she stays at Luce or not), but I’ll be interested to see what she’ll be cooking up there.