I was invited to try LA Market, Kerry Simon’s (the “rock n roll chef”) restaurant at the JW Marriott at LA Live. I’ve had experience with some of Simon’s food before. I dined at Simon LA at the Sofitel during a dineLA a few years ago. Even further back, I had some of his cooking at Prime Steakhouse at the Bellagio in Las Vegas (though it’s not solely Simon’s food – it’s a Jean-Georges Vongerichten establishment). My meal at Prime was one of the best steakhouse meals I’d had to that date, and I still remember it fondly.

The restaurant recently named a new chef – Hell’s Kitchen season 8 winner Nona Sivley. You see, the prize for winning the show was the head chef position at LA Market. Sivley, who is from Georgia, is bringing some Southern influences to LA Market’s menu – surely an interesting mesh with Simon’s “rock n roll” style. 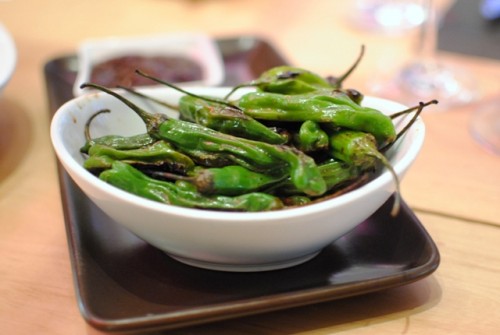 I’m always hesitant about eating shishito peppers – sometimes they’re very mild in heat, sometimes I find they burn like hell. This time, they were the former, showing off more of a sweet, roasted flavor. 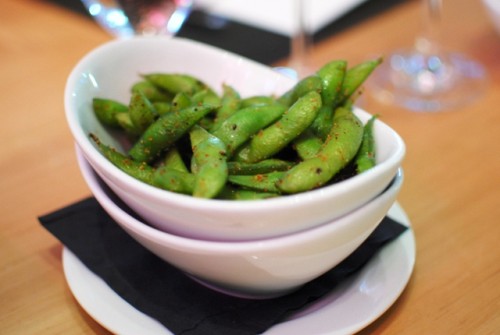 Similar to the shishitos, these edamame were heightened by a little by of smoky, charred flavor; I thought this was a nice complement. 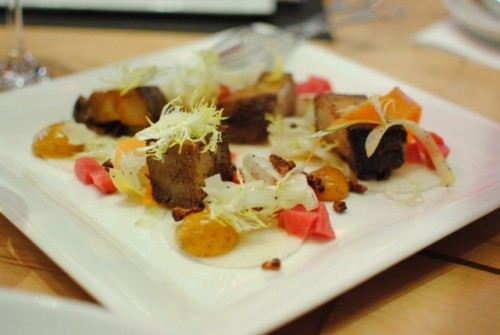 The pork belly – as advertised – was nicely crisped up, and I particularly enjoyed the fennel flavor along with it. A little bit of jicama and candied pecans provided some texture, while the beets added some acidity to pair with the rich pork. 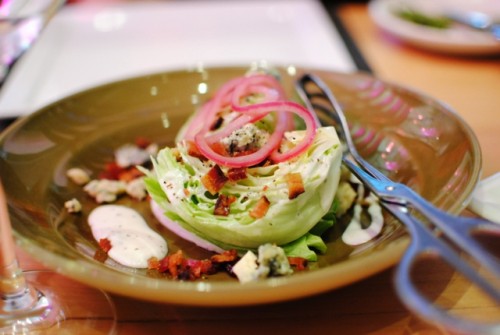 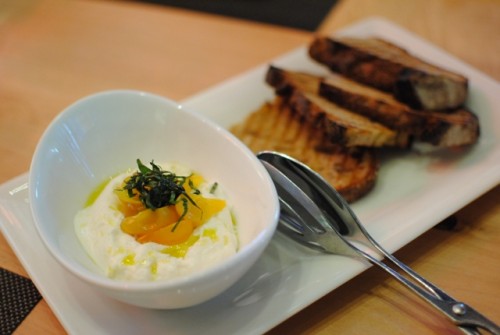 This was a pretty simple dish, showing off some of the fresh flavors. The burrata was nice and creamy, and married well with the oil, tomatoes and crusty bread. 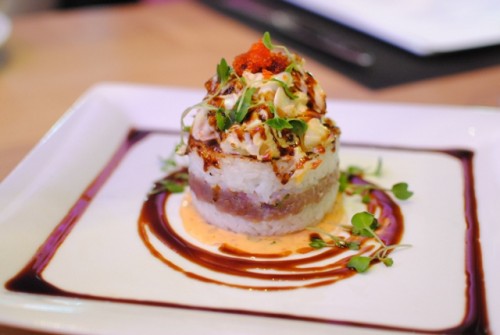 This was one of the more signature Kerry Simon dishes. This was pretty similar to a glamoured-up spicy tuna roll, in my opinion, with the chili aioli providing the heat. 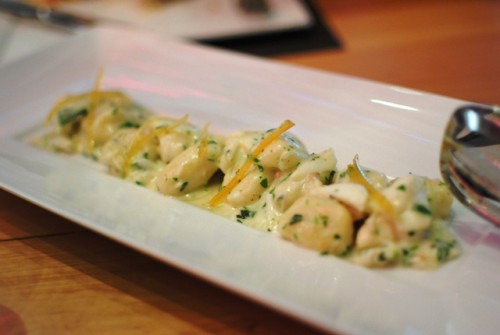 One of Nona’s new entrants to the menu, and I loved it. The gnocchi were light, while the lumps of crab were sweet and had a nice, clean flavor. The cream sauce really brought things together. 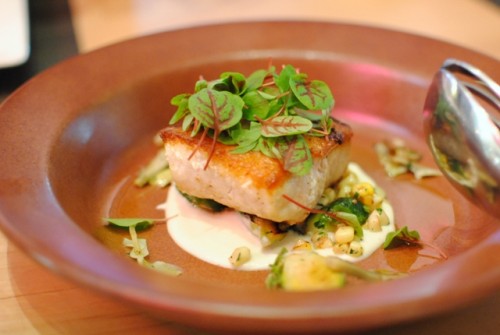 This was another solid dish; the cod was cooked well, leaving it tender and moist. I really liked the sweetness of the roasted corn accompaniment. 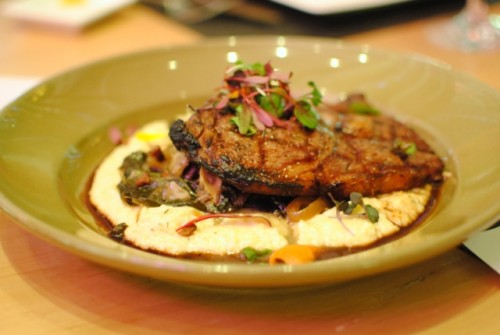 This was a thinner steak; I typically prefer my steaks a little thicker, as it provides a larger area of medium rare meat (as opposed to the grayed edges). However, this was cooked well, and the cheesy polenta was a nice, rich pairing. 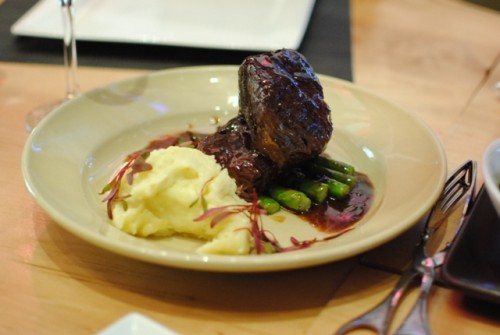 Perhaps not the most exciting dish on the menu, but it was one of the tastiest. It’s hard to go wrong with short rib, and this one was very tender and flavorful. Mashed potatoes are a creamy pairing. 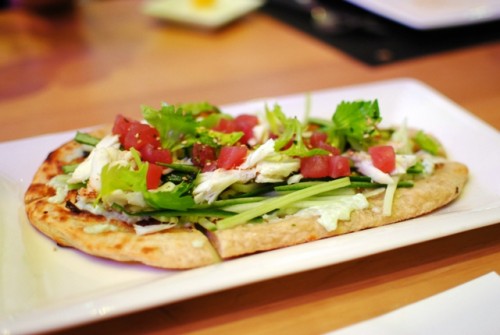 This is one of Chef Simon’s signature dishes – definitely unique. It was a warm, baked pizza dough topped with this “wasabi rice,” tuna, crab and avocado. I’d probably prefer these components in a traditional sushi roll, but I found it to be an interesting take. 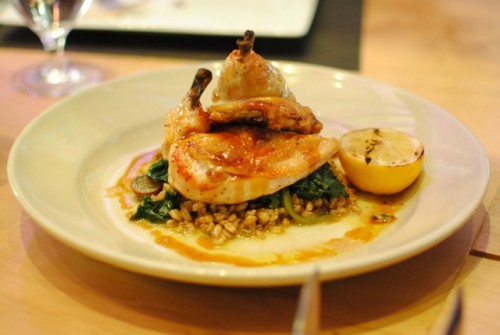 I thought this was a good roasted chicken, though not particularly special. There was nothing wrong, but it wasn’t that memorable compared to some of the other dishes. 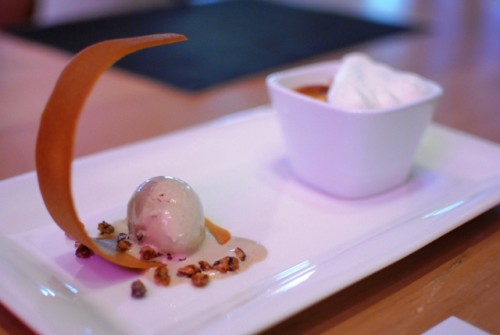 This was one of Chef Sivley’s entrants to the dessert menu, inspired by her southern roots. I liked this pudding – it didn’t have an overwhelming banana flavor, yet was rich and creamy. The pecan ice cream was a nice touch. 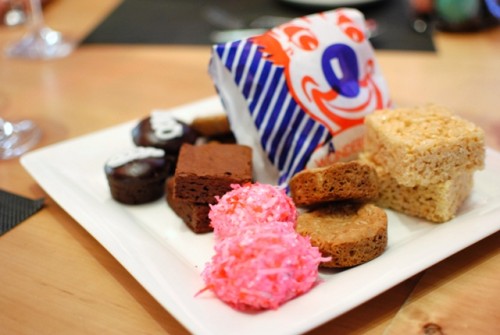 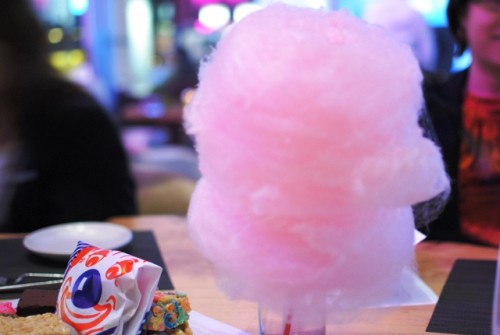 This was one of the most fun and playful desserts I’ve had in a while. It’s Simon’s housemade renditions of classic junk food including Hostess cakes, cookies, caramel popcorn, Rice Krispies, Fruit Loop Rice Krispy treats, and cotton candy. These were really close to the “original,” and a lot of fun to share.

Lastly, we got some macarons and a chocolate chip cookie to take home. 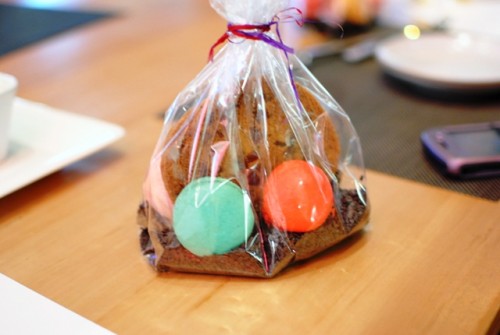 This was a solid meal from LA Market. Located right under the lights of LA Live, it has an energetic feel to it – especially when there’s an event or basketball game. I think Chef Sivley brings a fresh perspective to the menu, and it’ll be interesting to see how her Southern roots blend with Chef Simon’s modern fare.