I first heard about Ramen Jinya from Jonathan Gold’s raving review of it last year. He even called their tonkotsu ramen one of the 10 best dishes of 2010. I really enjoy a good bowl of ramen, so that was more than enough to convince me to try it. However, I didn’t get a chance to until this year’s Gold Standard event. I made 5 different stops at their booth, where they were serving a delicious and soul-satisfying tonkotsu ramen. I knew a visit to their restaurant was in short order. 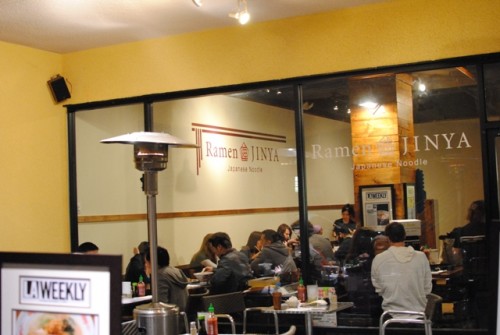 A number of pork and chicken broths (and even one seafood) are available, along with a bunch of toppings to customize your bowl exactly how you want it. 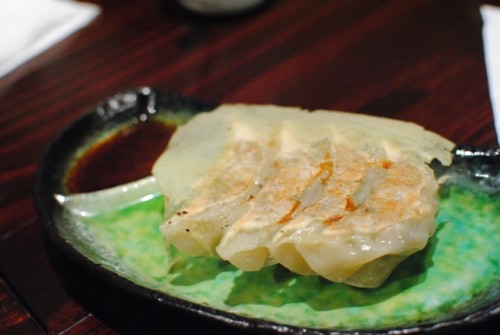 The lone appetizer was these dumplings. I thought they were just okay – the filling had more of a cabbage flavor than meat, and the gyoza skin had a nice chew to it. I wanted a crispier bottom too. Not really better than some frozen ones you can get.

This particular type of tonkotsu broth is limited to 20 servings a day for some reason, so I felt obligated to try it. My first sip of the milky broth was delicious – a rich, hearty flavor was complemented with the sweetness of onion and pickled ginger. The noodles were excellent as well, with a nice al dente chew. The chashu was lean, yet surprisingly tender and flavorful. My one qualm is I would’ve liked more broth. I think I eat faster than most, but not fast enough to avoid the noodles absorbing much of the broth, ruining my broth-noodle ratio. 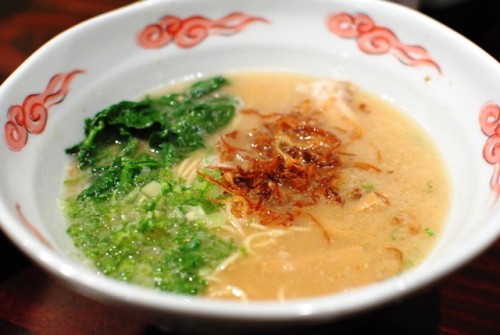 The server said this was the ramen served at the Gold Standard event. It tasted a little different from my memory, but still good. Not as fatty and oily as the Hakata ramen, the pork broth had a lighter, cleaner flavor. All of the other accompaniments were the same. 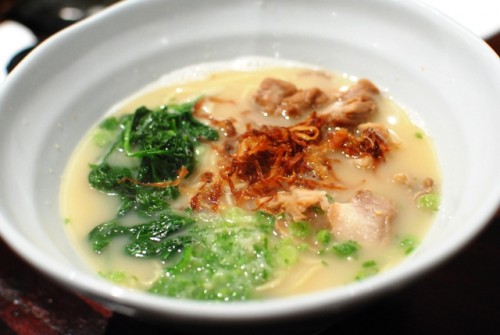 I also had a sip of this broth, a chicken based one. After having a couple of pork broths, this chicken was was noticeably lighter and cleaner, but still hearty. Depending on what I’m feeling like, this would also be a solid option, but I tend to prefer the richer pork broths.

Jinya is a very good place for ramen. I think all of the ramen components are done very well; my only complaint is the soup-noodle ratio. I enjoyed their Hakata ramen over Shin-Sen-Gumi’s, though not over Ippudo’s.