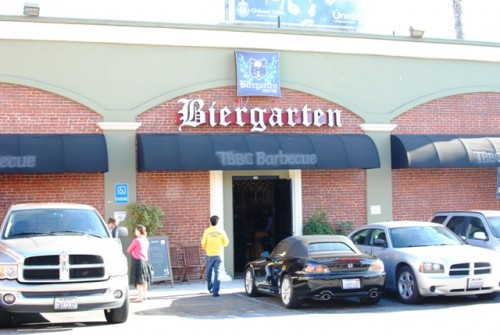 The pop-up restaurant is becoming the biggest restaurant trend in LA since the food truck. While I’d like to say they’re starting to get annoying, they’re still capturing my interest like none other. There’s something about the temporary, almost urgent nature of these meals – especially when it’s a chef I’m a fan of. For one day only. Ahhh you’ve got me.

In this case, we’re talking about Walter Manzke, perhaps the most notable chef in LA that’s not cooking in a restaurant (or imminently about to open one). My favorite meal at Test Kitchen (the ultimate rotating pop-up) was prepared by Manzke, so this was a must. Presented by BlackboardEats and Food GPS, the meal was inspired by a beefsteak (not the tomato) – a sort of gluttonous banquet originating in New York focused primarily on beef, particularly the tenderloin. 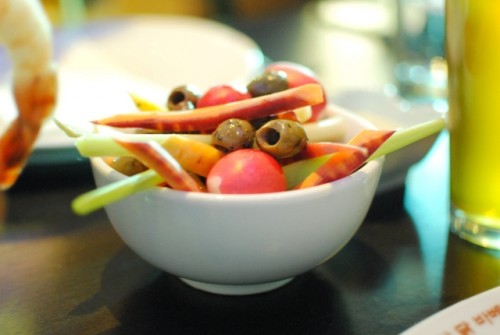 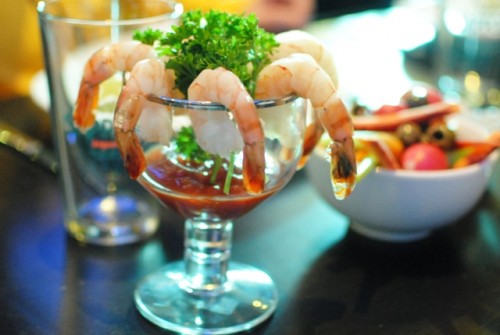 Waiting for us at the table was course one: assorted vegetables and dip, as well as a shrimp cocktail. There wasn’t much to the vegetables and dip – simple and fresh tasting. The shrimp were plump and tasty, with just a little bit of spice from the cocktail sauce. 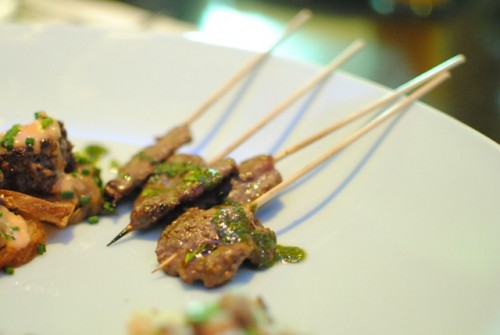 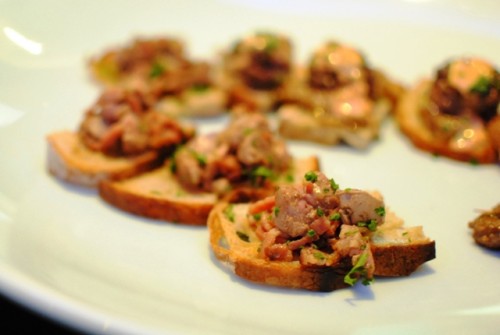 Burgers on toast with Bermuda onions 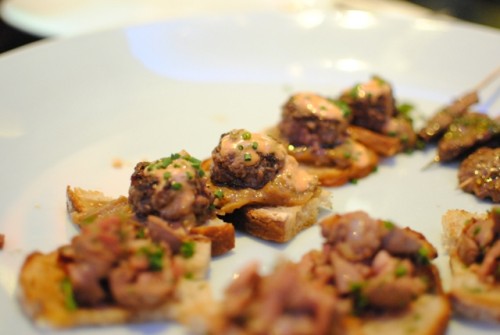 The second course was a trio of small meat preparations. All three of these were very good. The lamb sirloin was incredibly tender, with just a little bit of gamey flavor that reminded me it was lamb. A minty chimichurri-like sauce topped the meat. Second were lamb kidneys. Extremely tender, these were paired with smoky bacon and topped with ciabatta (I think) crostini. Lastly were the burgers…more like a meatball on toast. Excellent as well, meaty with a nice sweetness from the onions, and the toast provided a welcome crunch to the bites. 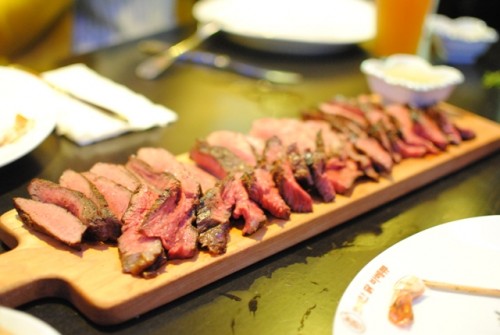 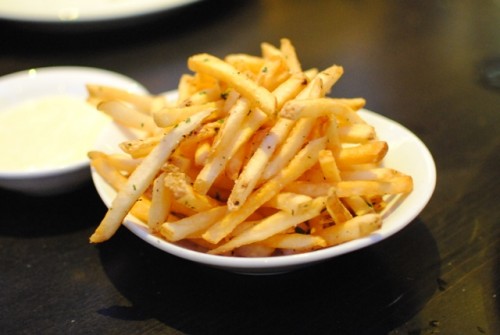 This third course was about 90% of the food of the night. The meat came out in impressive fashion on long wooden boards filled with nicely charred, perfectly cooked steaks. I thought the flatiron steak was good – tender, juicy and flavorful. However, the rib-eye cap was a world apart. Even more fatty, tender and flavorful, this was a decadent cut. Delicious! The meat kept on coming; I think we had 3.5 platter servings of this. Awesome.

The fries were some of the best I’ve had in recent memory. Perfectly crisp with a fluffy interior and served hot. Perfectly salted too. Can’t beat it.

I wouldn’t have called this a bread pudding, more like an apple crumble. It was a solid one at that. Warm cinnamon-spiced apples and raisins were served with a crunchy, crumbly crust and vanilla ice cream.

This meal was easily one of the stronger pop-ups I’ve been to in a while and at $50 all-inclusive, it was an absolute steal. The food wasn’t necessarily the most imaginative or unique, but it wasn’t trying to be. It was comfortable and executed well; delicious and plentiful, with that third course being exactly what I was looking for. The beer was good too, with a number of solid options being poured throughout the night. With meals like these, I continue to wonder when Manzke will finally open up his own restaurant.