Scarpetta’s spaghetti is one of the best pastas I’ve ever had; for $24 per serving, it probably should be. I first got an in-depth look into how this pasta is made on Anthony Bourdain’s No Reservations, where chef Scott Conant demonstrated how he prepares it. It’s quite simple really, only involving a few ingredients.

Using a few modifications (adjusting to what I had on-hand), I set out to re-create this pasta at home (at only a fraction of the restaurant price).

1. Place a pot of water on the stove and bring to a boil. Prepare an ice bath by placing ice in a bowl and filling with cold water. Core tomatoes with a paring knife, and discard cores. Score the bottom of each tomato with an “X.” When water has come to a boil, place tomatoes in water and leave for 15 seconds, until skin begins to split away. Transfer to ice bath. When cool, peel with paring knife.

2. Cut tomatoes in half lengthwise. Remove seeds with your thumb, and set seeded tomatoes aside. Reserve seeds and excess juices. If using canned tomatoes, seed in the same way.

3. In a new pot, place 2 tablespoons of extra virgin olive oil over medium heat. When the oil is hot, carefully transfer tomatoes to the pot. Add a pinch of salt and chili flakes.

4. Allow the tomatoes to cook for a few minutes until they begin to soften, then smash them with a potato masher. If the consistency is particularly thick, strain excess tomato juices for seeds and add to pot. Allow tomatoes to cook 30 to 45 minutes over medium heat, smashing and stirring occasionally.

5. While the tomatoes are cooking, prepare the basil-garlic oil. Take a small saucepan and place the remaining 1/4 cup of extra virgin olive oil in the pan. Add garlic cloves, basil, and chili flakes. Slowly heat to allow the flavors to transfer to the oil. When the garlic is lightly browned, remove from the heat. Allow to cool for 5 minutes. Strain the oil and combine with the tomato mixture.

6. Remove the sauce from the heat and adjust the seasoning with additional salt, as needed.

1. Place a large pot of water on the stove. Heavily season with salt, until it tastes as salty as a broth would. Bring to a boil.

2. Roll basil leaves into a cylinder and thinly cut lengthwise into a chiffonade. Set aside.

3. Cook the spaghetti in the water and remove when it is just shy of al dente—depending on the pasta, 3 minutes for fresh, 10 minutes for dried.

4. While the pasta is cooking, place the sauce into a sauté pan and heat slowly. Allow the sauce to reduce slightly. Add the pasta to the sauté pan along with a bit of pasta water, to add starch and seasoning.

5. Add the pasta to the sauce, and allow to finish cooking, over medium high heat. The sauce should coat the pasta and look cohesive. When you shake the pan, the sauce and pasta should move together.

6. Remove from the heat and add the basil, cheese, butter, and extra virgin olive oil. Toss until well incorporated.

7. Adjust the seasoning and serve immediately.

I followed this recipe pretty closely, with exceptions being the 100% use of canned San Marzano tomatoes (instead of a mix of fresh and canned), omitting the cheese, and using linguini fini instead of spaghetti (I totally thought I had some in the pantry, but I didn’t). 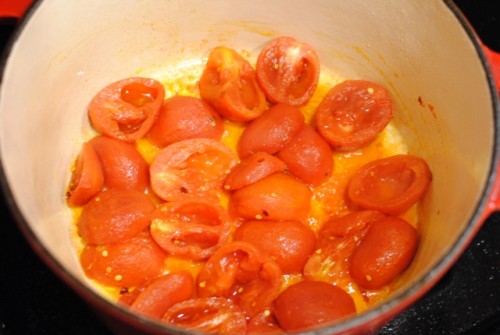 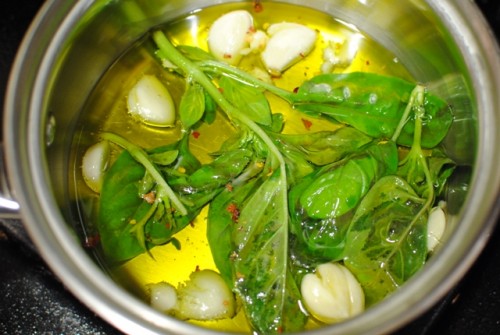 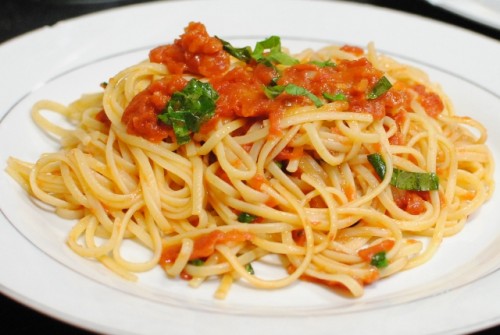 My pasta turned out decently. Frankly, it was a little disappointing and it was probably me more than the recipe. The tomatoes were kind of sour and acidic; I added a little sugar to combat that but it wasn’t quite enough. I also wanted this to be a bit saucier. I kind of felt I had chunks of tomatoes on one hand, and the infused olive oil on the other. They didn’t really come together.

I liked the addition of the butter at the end, adding a nice richness and creaminess. However, I was missing some of the bright, vibrant flavors I was looking for. I’m going to have to retrace my steps and try again. Simplicity isn’t always easy. 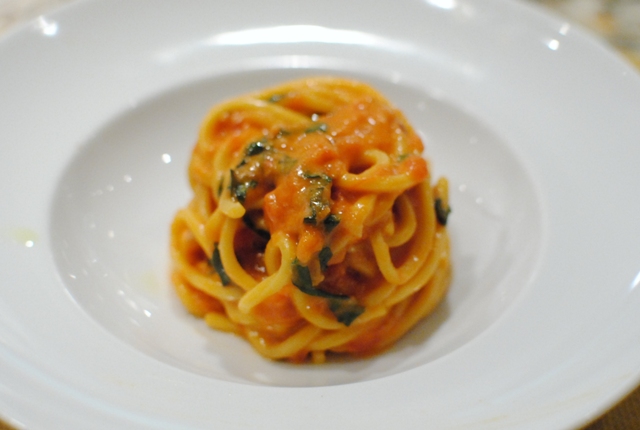