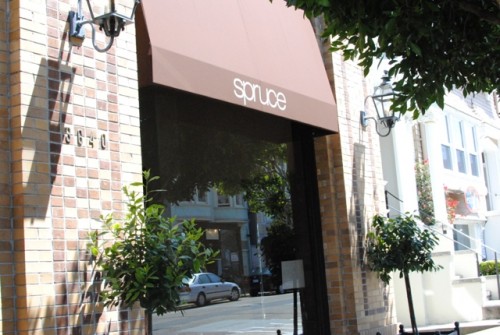 Spruce opened in 2007 to high praise and a lot of attention, being one of the hardest reservations for a while. Almost 4 years later, the buzz has certainly calmed. However it remains a a very popular spot, even garnering a Michelin star in the 2011 guide.

Their most famous dish is likely the “Spruce Burger” which is listed in many publications as one of the top burgers (or dishes, period) in San Francisco. I happened to be working in San Francisco’s Laurel Heights on this day, so it was a perfect opportunity to come by and try this burger.

The burger, at its simplest, includes a bun, patty, choice of cheese, pickles, lettuce, tomato and side of fries. A variety of add-ons are available including bacon, a fried egg, mushrooms, caramelized onions and even foie gras.

We started with an amuse bouche from the kitchen. 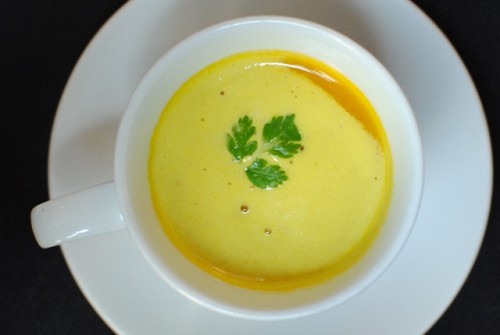 Looking like a cappuccino, the carrot soup was comforting, and not overly sweet nor overly carrot-y. I appreciated the subtle nuttiness and sweetness from the almonds and dates, respectively. 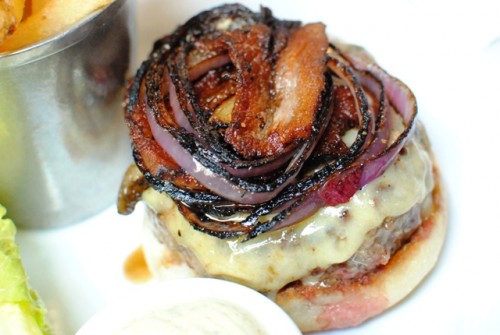 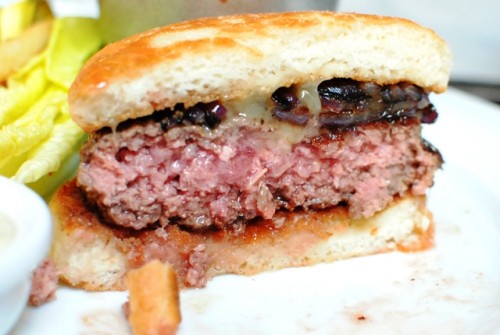 Now, what we came for! I first noticed the bun. It was relatively thinner and denser than what’s normally seen, with a well-toasted texture…I think it was pretty much like an English Muffin. The meat (Niman Ranch chuck) was cooked a nice medium rare and oozed fat and juices when squeezed. The meat was tasty and the bun did a good job of soaking up the juices. I opted to add on bacon and caramelized onions; I’d have to say both of these were very good and added a lot of flavor. It all came together really nicely; easily one of the better burgers I’ve had in some time. At $16, it’s not the cheapest of burgers, but the quality is apparent. It’s a relatively simple burger, but the execution is key. I think each of the components were tasty on their own, but really came together to pack a load of flavor. 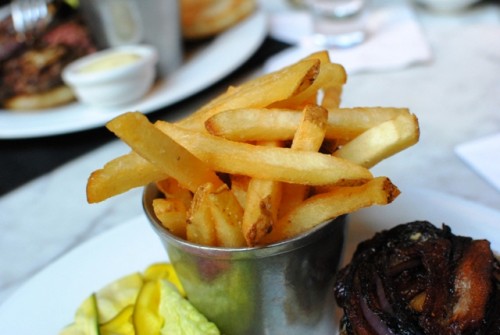 The fries (which came with the burger) were quite good as well, with a delightful crunch on the outside and fluffy potato on the inside.

There’s a whole rest of the menu that I haven’t tried yet, but if this burger is any indication, I expect it to be well-executed, carefully crafted and probably pretty tasty. The burger alone, though, is enough reason for a return visit.