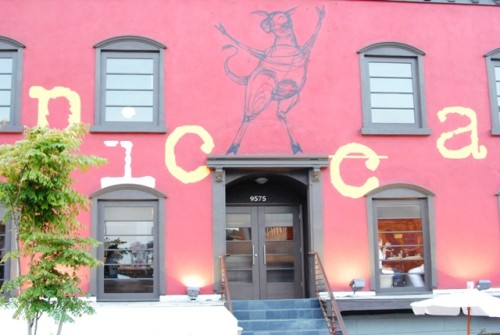 Picca has been a long time coming. Ever since Test Kitchen closed its doors, we’ve been waiting for Sotto (downstairs, opened March) and Picca (upstairs). Although Picca’s grand opening is technically Saturday the 25th, there have been a number of preview dinners this week. I attended one of the “Test Kitchen” previews.

Ricardo Zarate is the chef behind Picca, popularly known for the restaurant Mo-Chica and for being named a 2011 Food & Wine Best New Chef. I’m pretty familiar with his cuisine, between a number of visits to Mo Chica and samplings of his food at Test Kitchen and various food festivals, so I’ve been eagerly awaiting this opening.

The menu is split into five sections: appetizers, causa sushi/ceviche/tiraditos, anticuchos, entrees and desserts. During this preview, we selected one from each to create our own customized five-course meal.

As with all of the other Test Kitchen sister-restaurants, Julian Cox is the man behind the bar. Here, the cocktails feature pisco, a brandy-like alcohol from Peru. 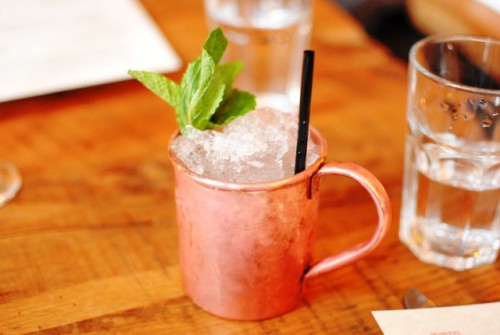 Ginger and anise flavors help balance the alcohol in this drink, with a nice mint flavor towards the end. Loved the copper cup. 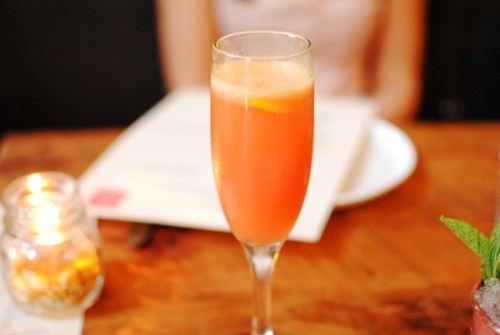 Kind of like a kicked-up mimosa. Fruity and citrus notes from the passion fruit and lemon juice balanced the cava and pisco. 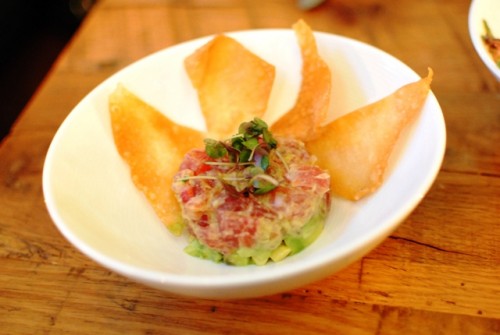 Tuna tartare is a little played out in my mind. However, there was something about this version that really piqued my interest. The tuna was good, and there was a touch of wasabi for some heat. The wonton chips were a good way to get some light texture into the mix. 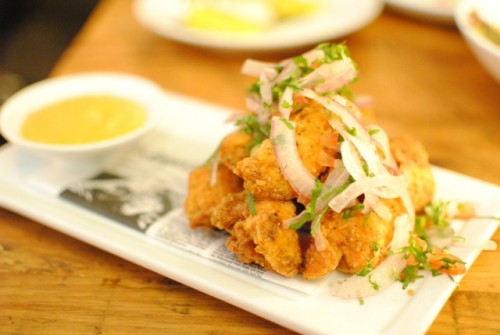 Pieces of marinated chicken breast were fried up and topped with a salsa. The chicken wasn’t dry at all, though it did not have a ton of flavor. The bulk of the flavor came from the fresh salsa, as well as the sweet rocoto sauce. 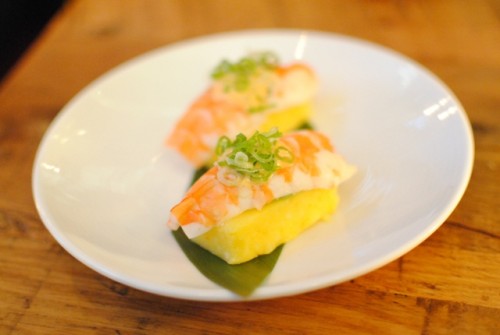 Zarate’s play on nigiri sushi are these causa sushi. Instead of rice, a soft and creamy potato is the base for all sorts of seafood – here, shrimp. Accented by some bright yuzu kosho, I thought this was really tasty. 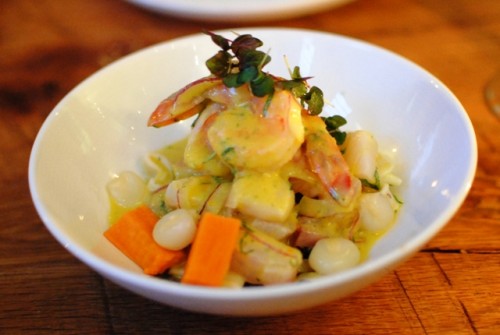 This ceviche is pretty similar to the version at Mo-Chica. Given all the accolades that this dish has won, I’m glad Zarate has kept it true to his original. Chunks of fresh sea bass, scallops, squid and shrimp are mixed up with onions and sweet potato in a citrusy marinade. Really delicious. 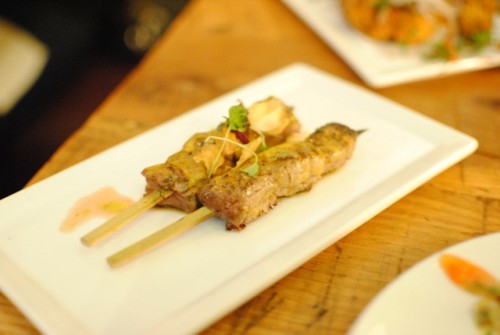 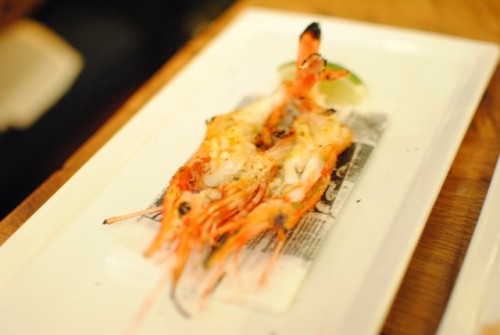 This was a must order for me, and it didn’t disappoint. It’s a rather simple dish, allowing the prawn to stand out. Lightly cooked, the prawn was very moist, sweet and tender. A little bit of lime juice was perfect. 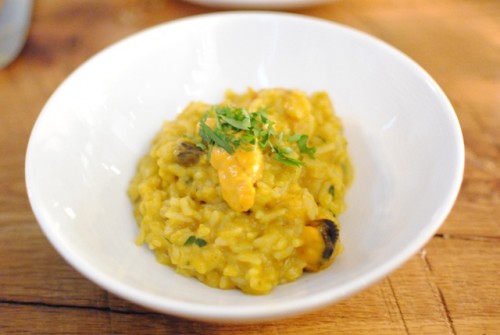 The seafood was cooked well, my favorite were the plump mussels.  The rice was really rich and flavorful, with a definite seafood flavor to it. 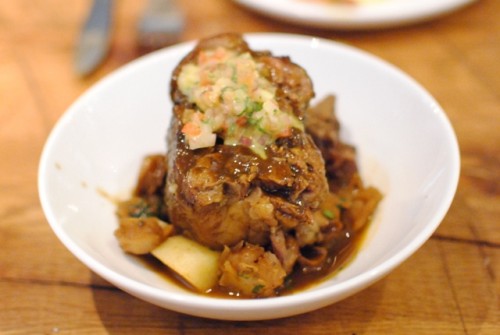 One of my favorite dishes at Mo-Chica is the braised oxtail, so this was something else I wanted to try. I thought the flavors were on point, with a little bit of fresh acidity from a salsa topping. However, the oxtail was served lukewarm (the sauce and potatoes were hot, though). 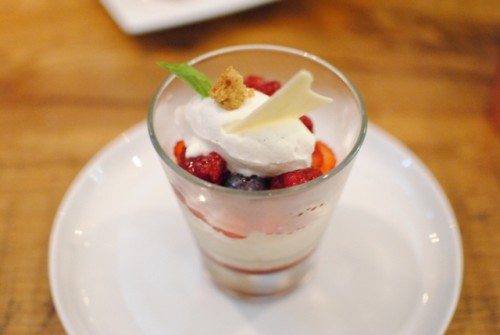 Light and flavorful, with a good pairing with the fresh fruit. I thought the sweetness of the fruit really went well with the milk-soaked cake. 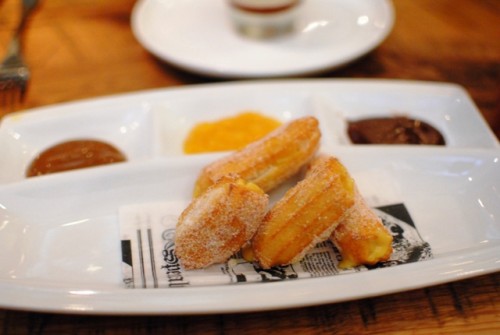 The churros were filled with, I think, a passion fruit filling. Nice. They were served warm, lightly crispy and sweet – exactly what I was looking for.  A trio of dipping sauces were available; chocolate was definitely my preferred sauce.

Service was slow and inconsistent (even as soft openings go), which was unfortunate given that the food was a hit. The table next to us actually got up and walked out…I’ve never seen that before. However, I suspect those issues will be ironed out quickly, and the diner’s focus put back onto the food.

Even with the diversity of LA, I don’t think many people are really familiar with Peruvian food (myself included). Asian and European influences are both evident in Peruvian fare; maybe that’s why the flavors that Zarate works with taste really familiar. While the ceviche was expectantly good, the causa and anticucho (love meat on a stick!) really shined as well. None of the food disappointed. I’ll likely be back soon to try more of the menu.