I’ve been trying to cook more pork. It’s a pretty reasonably priced meat (able to be eaten on a regular basis) but I really don’t cook it too often.

I grew up not really liking pork, especially the chops. My earliest memories are of thin, lean pork chops being cooked well-done, yielding a dry and mealy meat. Of course, there were the occasional ribs, carnitas or bacon, but the pork staple at home would be these well-done chops. My mother would often mention the words E. coli or salmonella whenever I inquired why, and she had the government on her side – until recently, the USDA recommend all pork be cooked to an internal temperature of 160 degrees (in May, it was reduced to 145 degrees).

Once I started dining out more often (for the longest time I never, ever ordered a pork chop), I realized how tasty these loin cuts could be. A thicker cut, cooked to a medium temperature, could be a delicious piece of meat. I’d be lying if I said I preferred a pork chop over a beef steak, but it’s a nice change of pace and usually much cheaper.

I found some good looking pork chops at my local Bristol Farms and decided to take some home to cook. I often get confused on some of the cuts by name – what I took home was akin to a beef t-bone, which I think is also known as a center cut chop or a loin chop. There’s also the rib chop from the rib section and akin to a beef rib-eye. 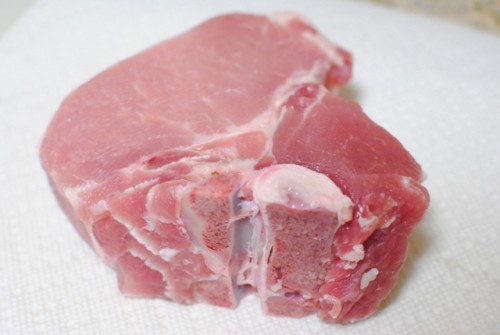 Like with my steaks, I often like to sear on really high heat and finish in the oven. No different here. I patted the pork with garlic salt, pepper and some fennel and seared on cast iron. The rest of the cooking was done in the oven – I was looking for an internal temperature of around 135 degrees upon removing from the oven. Resting the pork would take it up to the low 140s. 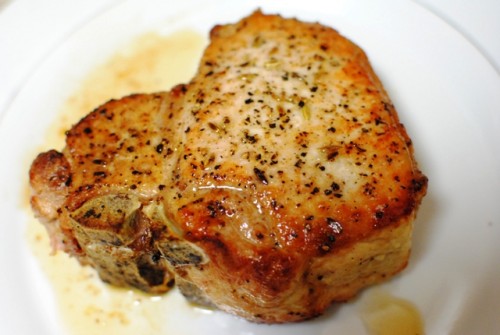 There was a good deal of fat left in my pan and I knew exactly what to do with it. I parboiled some potatoes and crisped them up in the fat! 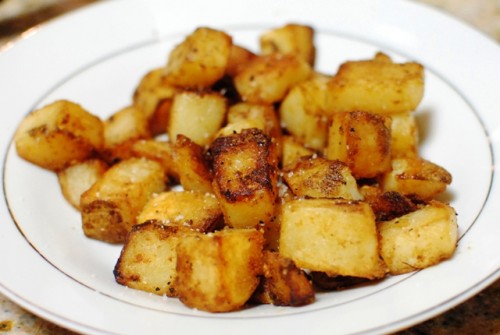 I’ve been a huge fan of corn season and I love cutting the corn off the cob and sautéing it. I did that here, with a little bit of spinach. 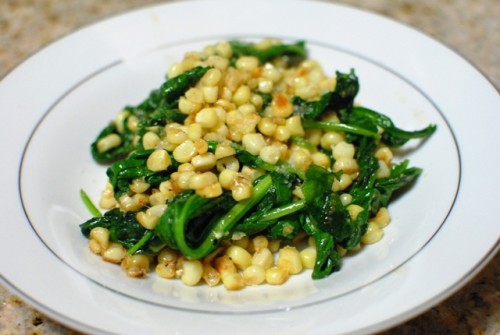 I thought the pork turned out pretty well. I wish I achieved more of a sear, but it was tender and juicy. Clearly, the brine did its job. Loved the potatoes, crispy on the outside and light and fluffy on the inside, while the corn was sweet with just the slight bite I was looking for.