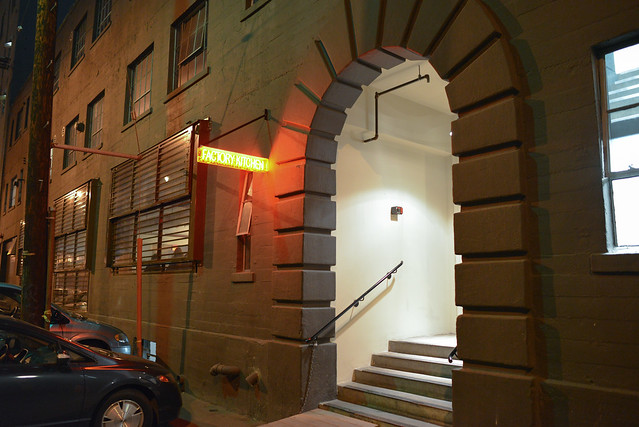 The Factory Kitchen, opened four months ago, is one of the newer entrants to the still-hot downtown food scene, particularly the Arts District. It joins Drago Centro, Bestia and Maccheroni Republic as Italian restaurants to open up in the area in the last couple of years.

The Factory Kitchen has a strong LA Italian pedigree with front of the house Matteo Ferdinandi (CUT, Drago Centro) and chef Angelo Auriana (Valentino) partnering up on the restaurant. Generally, reviews have been positive early on. A lot of people have been comparing this restaurant to neighborhood darling Bestia; given I’m such a huge fan of Bestia, a visit here was definitely in order. There are a number of similarities between The Factory Kitchen and Bestia including they (obviously) both serve Italian fare and share a similar price point, but they are distinctly different in menu and vibe. 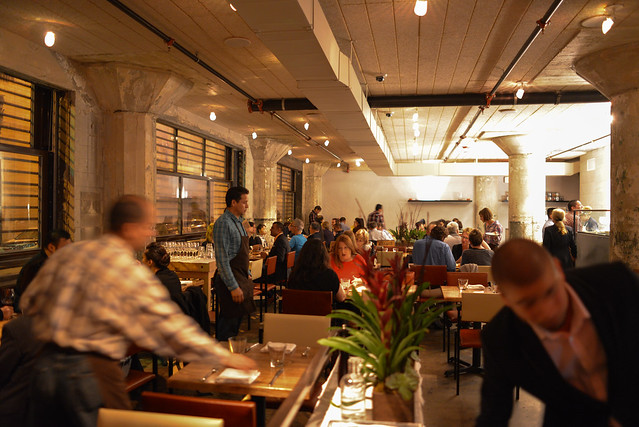 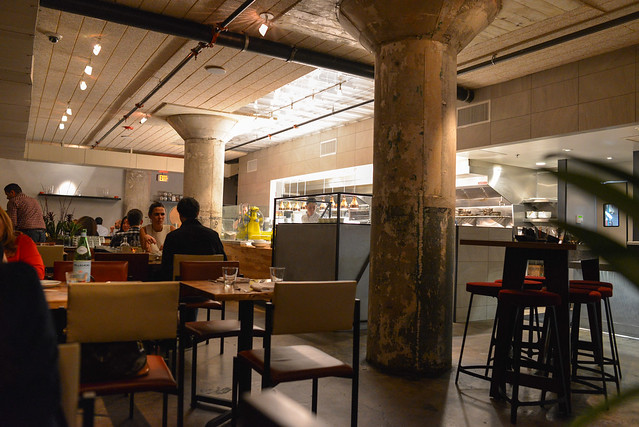 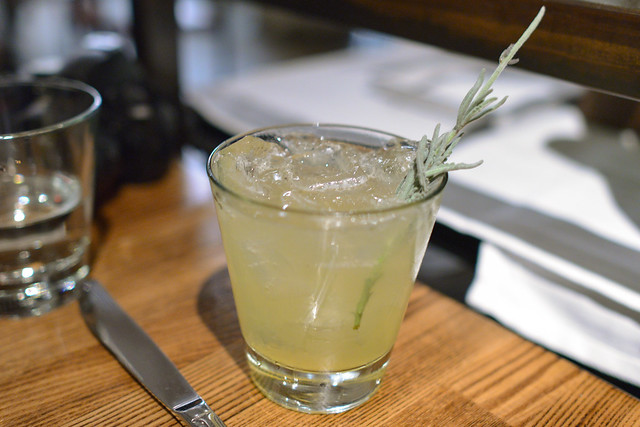 This cocktail had both sweet and savory elements, well-balanced with a lavender garnish accenting the finish. 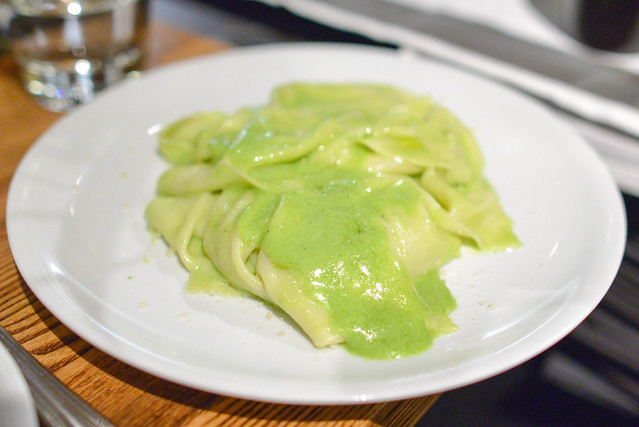 The meal began with easily the restaurant’s most notable dish. Silky layers of pasta were smothered in this delicate and subtle almond basil pesto. The texture of the pasta, so soft yet toothsome, was certainly a difference-maker. 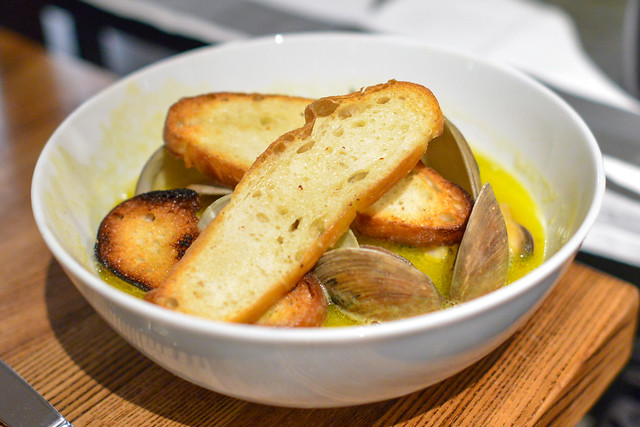 Plump clams and mussels were cooked perfectly in the savory broth. The grilled bread, served atop, made for great presentation but I would’ve preferred them served separately so that they’d keep their crust. 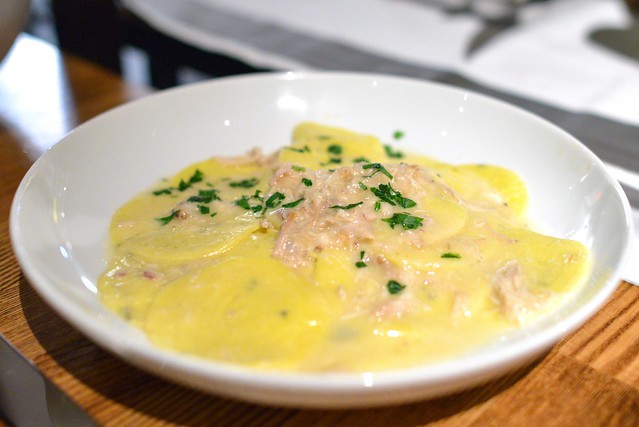 I liked the hearty chew present in this pasta complemented by a rich sauce and sweet chunks of rabbit. More pronounced both texturally and flavor-wise than the handkerchief pasta. 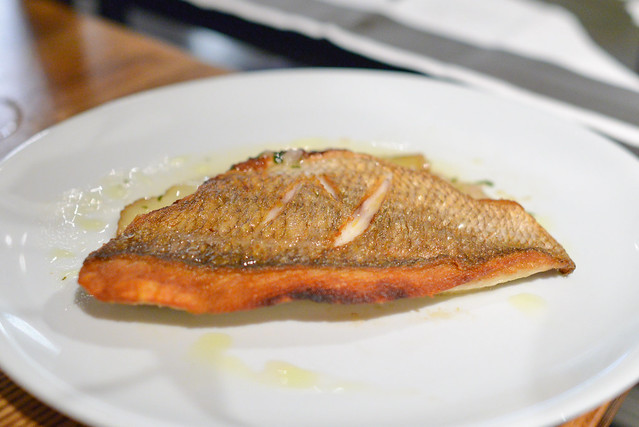 The fish was cooked beautifully with a moist flesh and crispy skin. The accompanying potatoes didn’t add too much though and felt oily; a lingering fish bone didn’t help either. 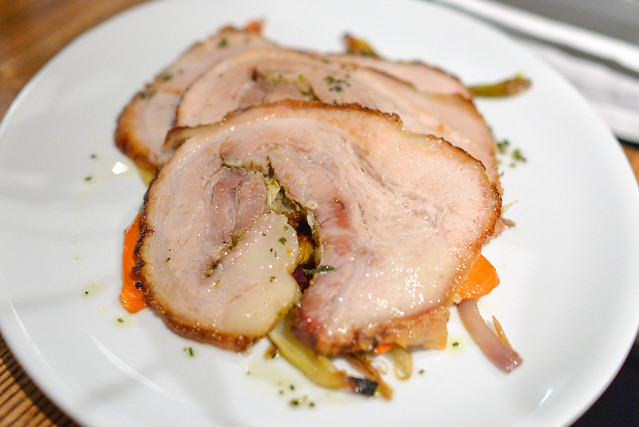 The porchetta, sliced pretty thinly, was packed with flavor. Glazed root vegetables were tasty too and provided some strong accompanying flavors. However I do wish the skin was crispier as most of it was fairly limp.

Feeling more than content, we passed on dessert (which we had heard mixed reviews on).

The Factory Kitchen presented a solid suite of dishes. The food was relatively simple and execution mostly strong; in many ways, it does seem like a more casual Valentino or Drago Centro type restaurant. However, food-wise it lacks much of the dynamic flavors of a Bestia or the value of a Maccheroni Republic. For that reason, I don’t think it’ll end up in my regular rotation of Italian spots downtown. Still, that isn’t to say The Factory Kitchen would disappoint moderate expectations. The restaurant offers, at least at this point, a relatively easy reservation, isn’t outrageously loud, and has more focused service than those competitors.