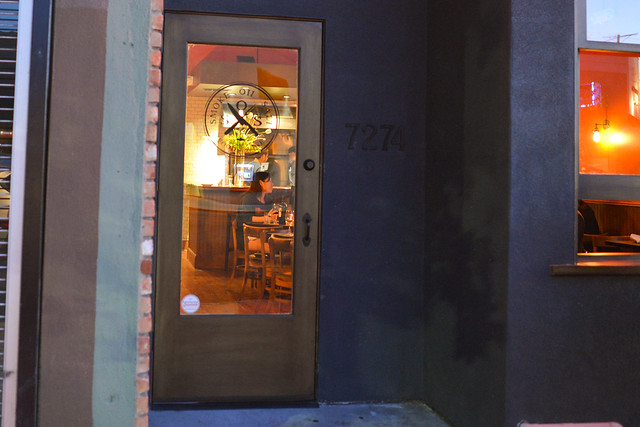 Spanish cuisine has gotten a lot of attention on the global scene in recent years; as diverse as Los Angeles is, we haven’t seen a lot of new Spanish eateries open up. Except for, of course, the megahit Bazaar; opened almost six years ago, it’s still one of the go-to spots for tapas in the city. smoke.oil.salt aims be another premiere Spanish option in LA.

Opened by Adam Fleischman/AdVantage Partners in the old Angeli Caffe location, the food is tapas-style focused on a lot of traditional flavors. Perfecto Rocher is the chef here, who most recently brought his Spanish influences (and resume including stops at El Bulli and Martin Berasategui) to Lazy Ox Canteen. I visited Lazy Ox a couple of years ago when Rocher was cooking and enjoyed it, so was excited to check out his next stop. 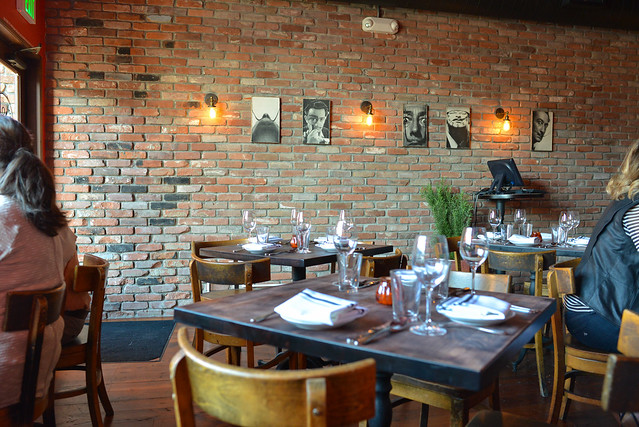 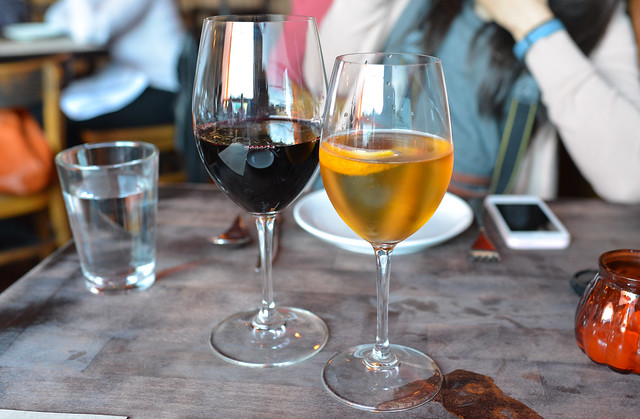 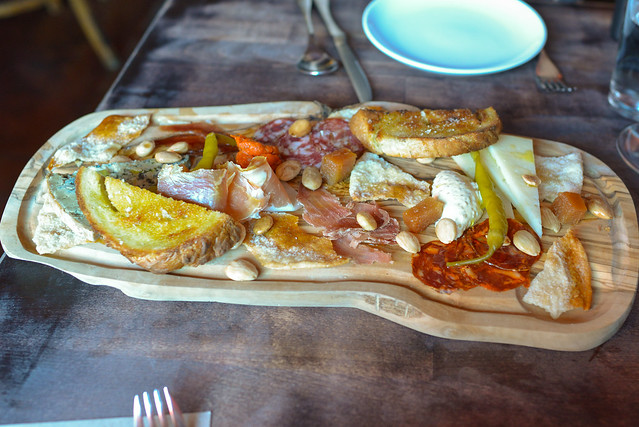 An ample selection of meats and cheeses were brought forth on this platter; duck proscuitto, chorizo, cured tuna, serrano ham, sopressata made up the meat options. They were all good, though I wanted a few more slices of each at the $29 price point. The sweet, crispy flatbread was a highlight – really delicious, especially with the meats and cheeses. We found the toast to be inedible though, toasted to almost a tooth-shattering texture. 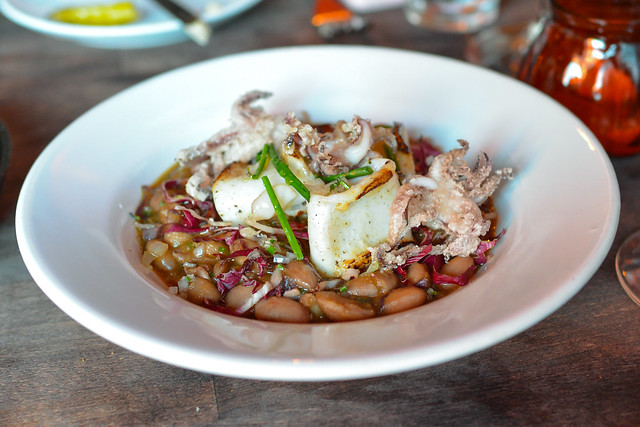 The calamari was cooked just tender, complemented by these creamy beans. Each bite was homey and comforting. 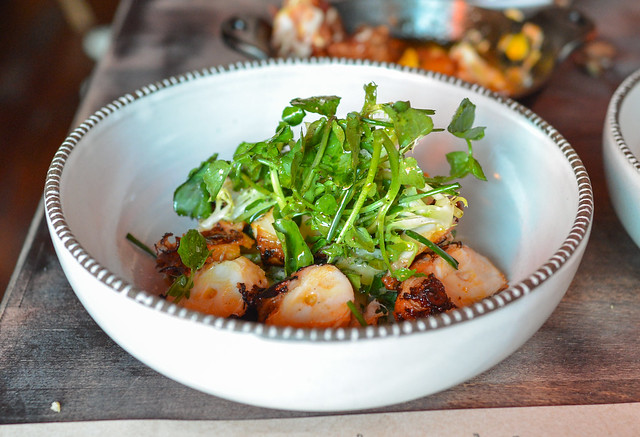 The smoke flavor was evident in the tender chunks of octopus; cool potatoes provided a creaminess while the salad brought some welcome brightness and acidity to the dish. 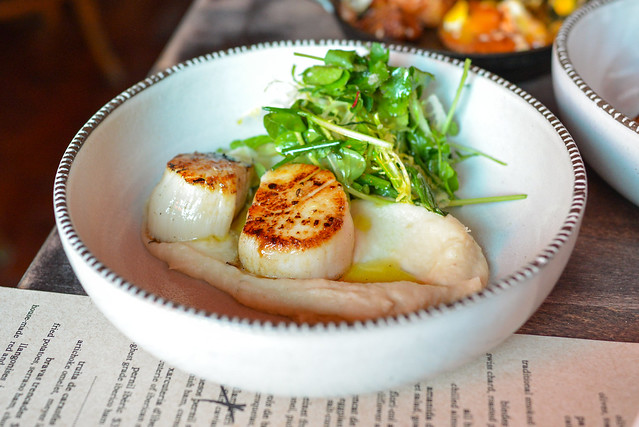 These were delicious seared scallops with an earthy and sweet celery root puree base. Again, the dressed greens were a nice pairing to add brightness to the rich scallops. 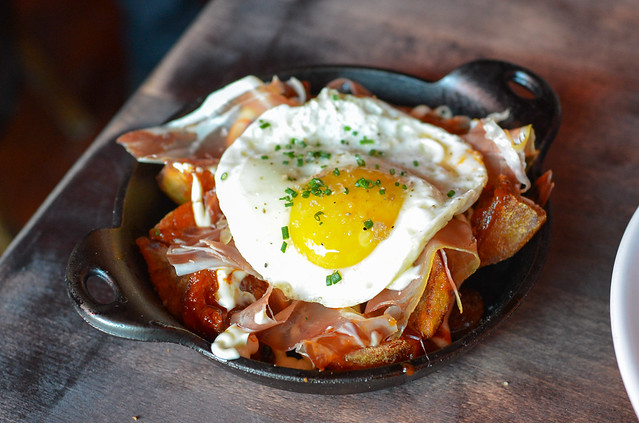 Fried potatoes, chorizo, ham and a fried egg – what’s not to like? This was another good dish; the potatoes maintained their crispy exterior even when soaking up the oil of the chorizo and the runny yolk. Very rich and decadent with a nice balance of flavors. 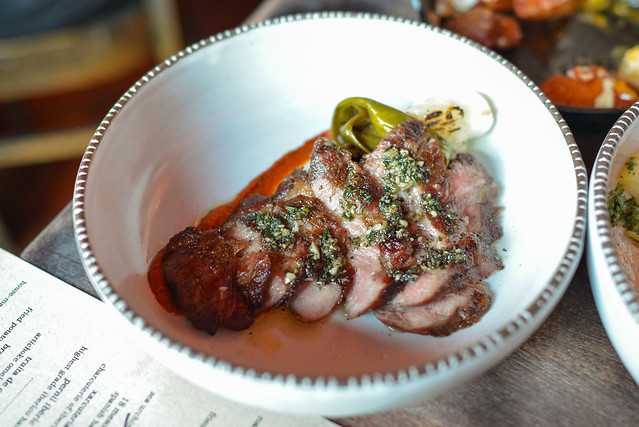 A standout dish and one of the best pieces of pork I’ve eaten in a while. Seared to a nice crispy char and medium temperature, it was just so flavorful. The tender slices were aided by the xato sauce which provided a lot of depth. Exceptional. 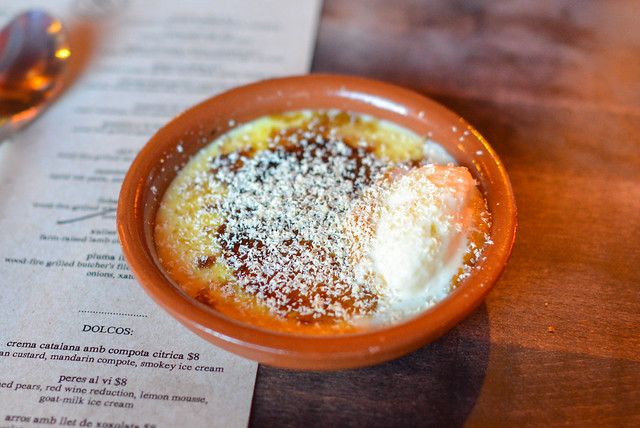 This dessert was similar to a creme brulee; the crema catalana was creamy but not too rich or sweet. Subtly smokey ice cream and bright citrus were nice accompanying flavors.

We enjoyed the meal here at smoke.oil.salt. Bold, balanced flavors were present throughout and we liked just about everything. The iberico pork alone is a reason to return here; the uni flan is another (unfortunately, they were out of the item on this evening). Being a big fan of paella, their ‘Paella Night’ Sundays sounds like another intriguing option.