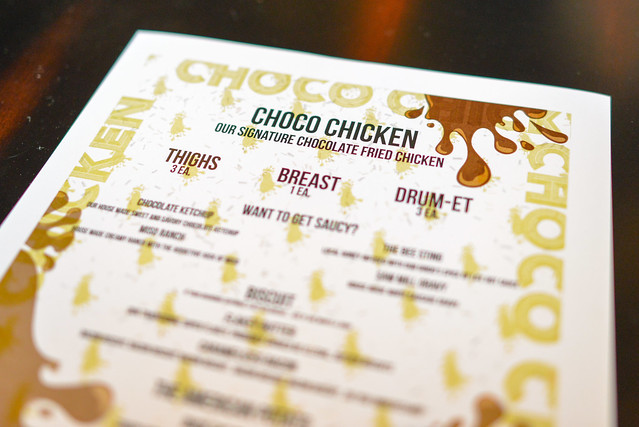 At first, chocolate and fried chicken sounded like an odd pairing. When I thought about it some more, I was intrigued and really wanted to try it. I imagine chicken & waffles smothered in a syrup elicited the same initial response, but has become a classic pairing. Some have likened this savory chocolate-chicken application to a mole sauce, though this would be very different. Among almost 20 other spices, a cocoa powder is applied to the chicken’s batter for a unique flavor. That’s after brining the chicken in a mixture that, of course, also includes chocolate.

Adam Fleischman, who brought the Umami Burger and 800 Degrees concepts to life, is also behind Choco Chicken. I’m a pretty big fan of both of those restaurants and figured I would be in good hands during this media preview evening. The restaurant is supposed to open to the public any day now in the former Corkbar space a few blocks away from the Staples Center. Owners feel strong about the concept, with expansion already in the works for a Santa Monica location. 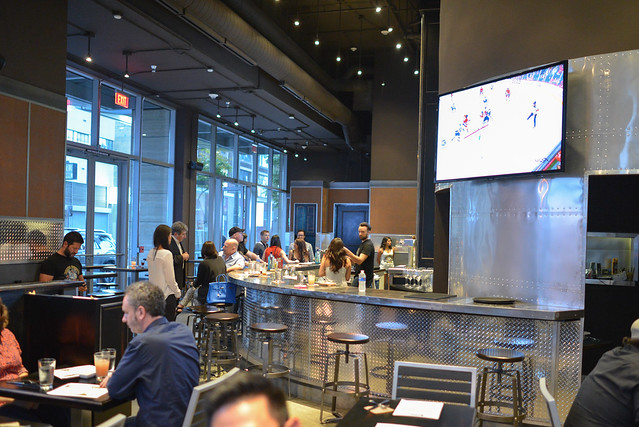 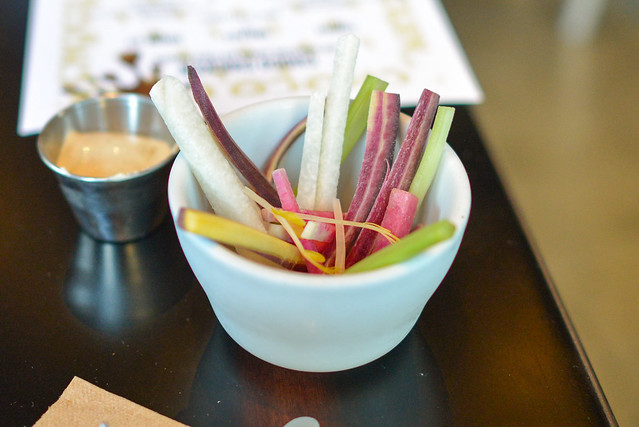 The meal began with something light – slivers of jicama, celery and other root vegetables were paired with a savory tangy miso ranch. 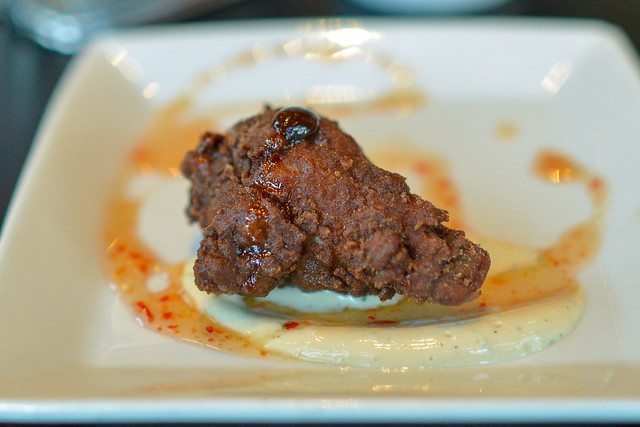 Next up – a taste of the featured chicken. The crust had a nice crunch and had a lot of depth to it; cocoa was definitely present but not overpowering. The chicken itself was cooked very well, juicy and moist. Pretty enjoyable; the dollop of chocolate ketchup added a bit of sweetness and tanginess to the bite. 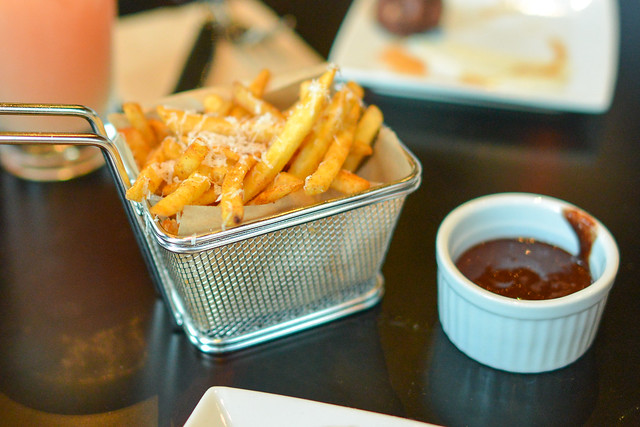 Duck fat fries were sprinkled with parmesan and, of course, cocoa powder. Slightly sweet, definitely savory with the chocolate-ketchup mix.

Next up came a duo of chicken-biscuit pairings. 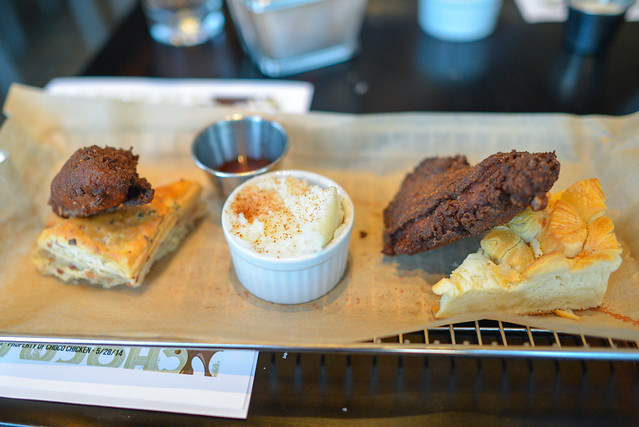 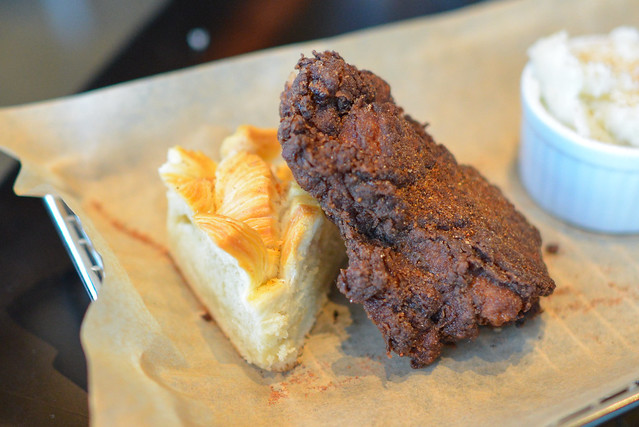 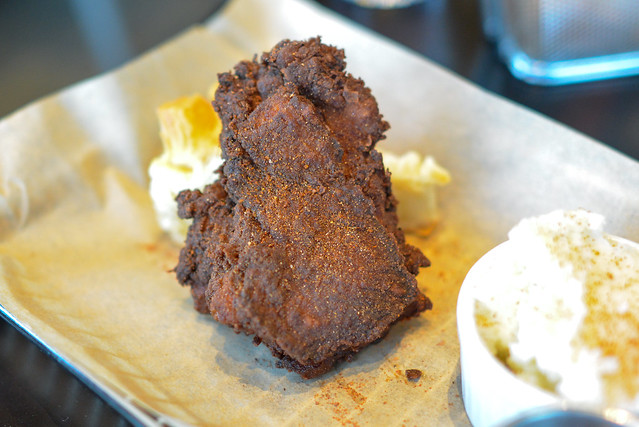 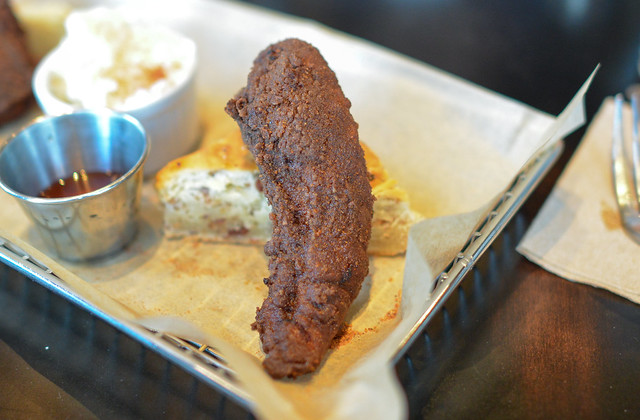 First, the chicken. Cooking-wise, this had to be some of the best executed fried chicken I’ve had in a while; it’ll be interesting to see if the kitchen can keep up the consistency once volume increases. Crusts were addictingly crunchy and meat was very moist (even the breast)…just really well done. Both of these were served boneless for ease of eating without any loss of flavor.

Biscuits were strong, though not as fluffy as anticipated. My preference was the flaky butter biscuit for its simplicity; the caramelized bacon one brought an expected extra dose of smoky porky flavor. Potatoes were mashed with a subtle chocolate flavor, just enough to remind one that there was chocolate incorporated. The texture was more on the airy side than the creamy side. 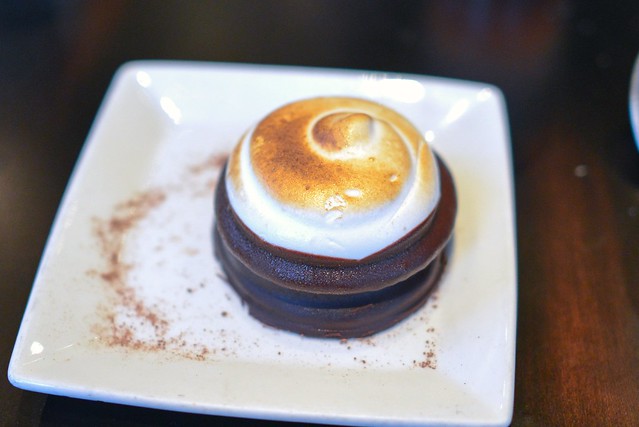 The dessert, prepared by Cake Monkey, was this one inspired by a classic s’more. Chocolate, graham cracker and marshmallow were all present, though I could’ve used more of a textural contrast somewhere perhaps from the graham cracker itself.

The fried chicken at Choco Chicken did not disappoint. The chocolate was used with restraint; it was obviously present but found a fine balance with the rest of the spices. The crunchy coating and moist meat really made for some successful fried chicken. Always interesting to find two very familiar flavors mixing into something new; I thought the mix of flavors worked and expect it to be duplicated by others. The side dishes, highlighted by the biscuits, were solid but the chicken is clearly center stage.