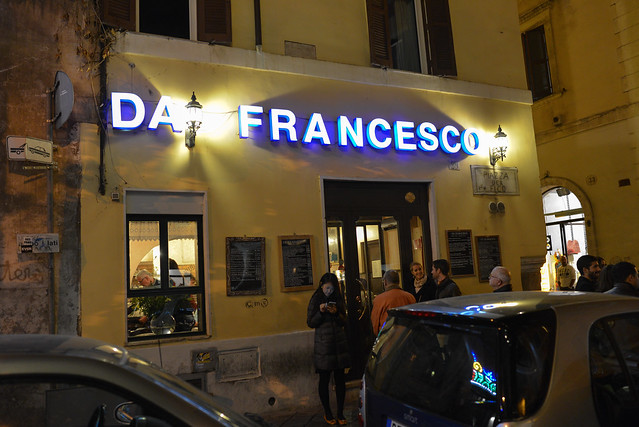 The first…and last…dinner in Rome was here at Da Francesco. While walking around the Piazza Navona area, we found this restaurant on Yelp. Located just east of the piazza, it had positive reviews and pictures with raves of a black truffle pasta. While I’m not always so trusting of Yelp, the pictures looked great and the prices reasonable (few dishes reach €20). 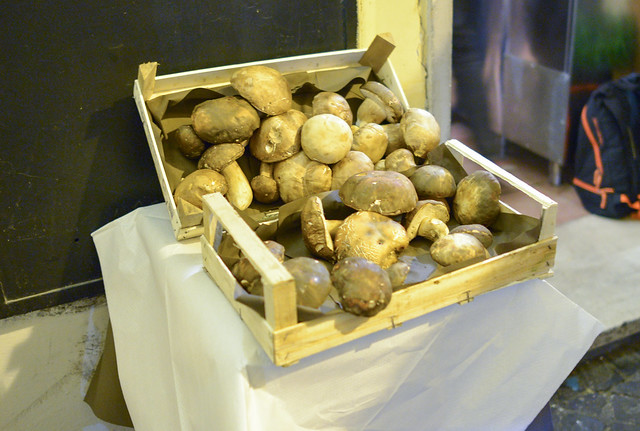 The menu is fairly extensive featuring everything from classic Italian appetizers to pastas, pizzas and heartier main courses. Porcini mushrooms were in season and a highlight on the menu (with the bounty displayed at the front of the restaurant). Menu and staff were also pretty English-friendly. We actually enjoyed the meal so much on our first evening that we returned on our last night to give a few more items a try.

Wine was plentiful (everywhere in Italy) and very reasonably priced. 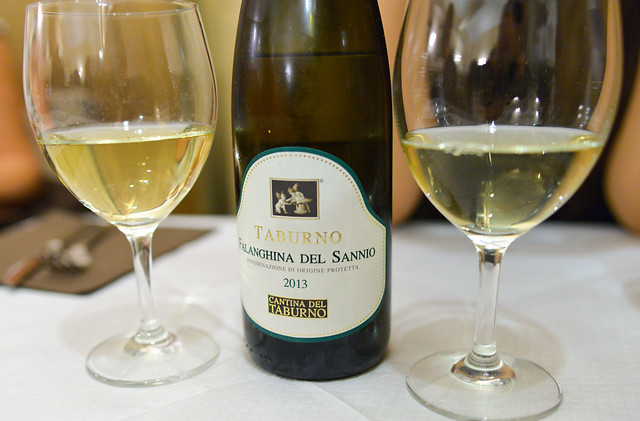 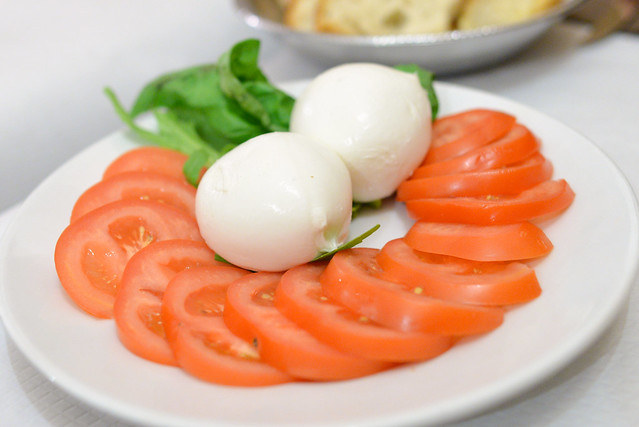 The caprese was simply done highlighted by sweet juicy tomatoes and some nice mozzarella. 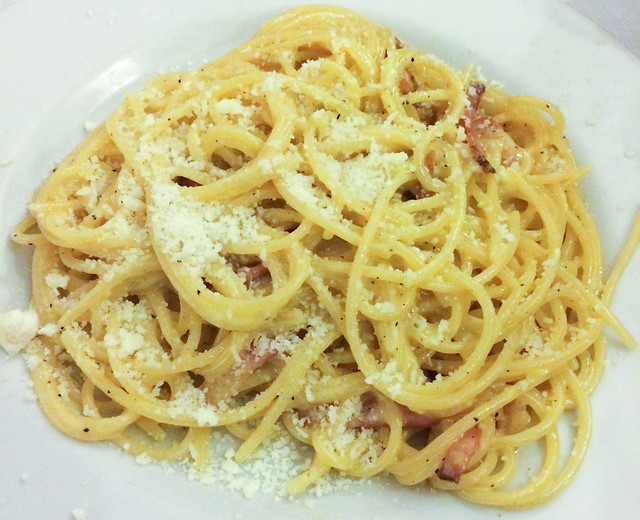 Since we were in Rome, we we decided to try a carbonara, which is a classic Roman dish. Rich and flavorful from the cream, cheese and bacon, this was definitely a hearty dish. 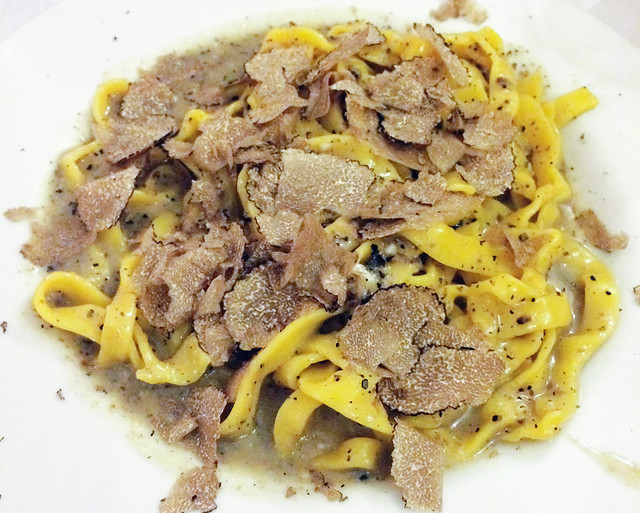 This was the dish/picture that initially attracted us to the restaurant. It delivered and more. Generous shavings of black truffle covered the plate, eaten with a fantastic housemade fettuccine. It was just a bit thicker than the fettuccine I’m usually accustomed to, having a really nice chew to it. With plenty of truffle and butter flavors, this was excellent. At €16/$21 I thought this was an absolute steal. 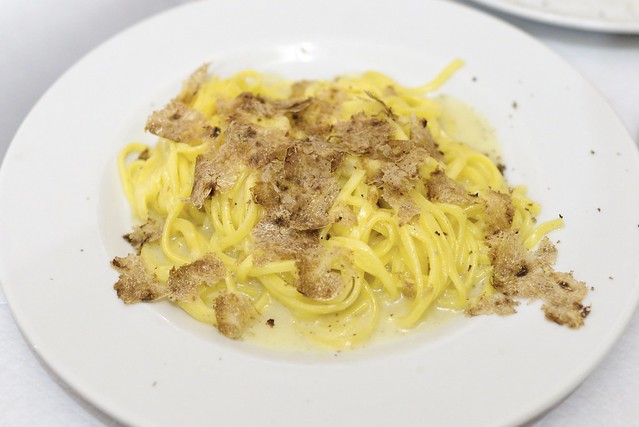 This was ordered on the second visit; after having the black truffle pasta the first time, I really wanted to try this seasonal dish. It was another strong pasta, with the housemade tagliolini having a more delicate chew and perfumed by the earthy truffles. I did like the black truffle pasta better though, largely due to the preference to the fettuccine. Obviously this was more expensive than the black (€28/$36) but was still very reasonable. 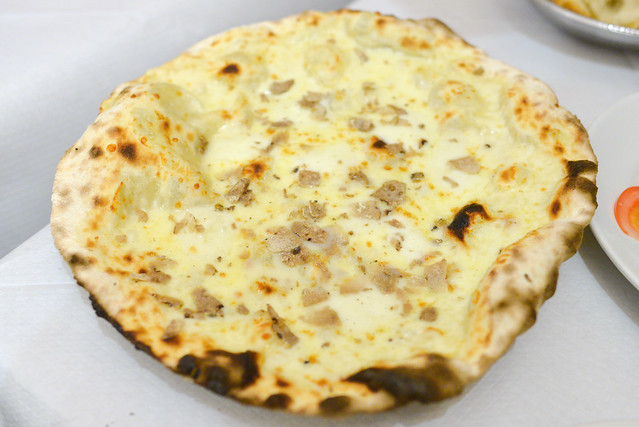 There weren’t quite as many white truffles as expected after seeing the pastas; however, the essence came through with plenty of cheese on a crispy dough. 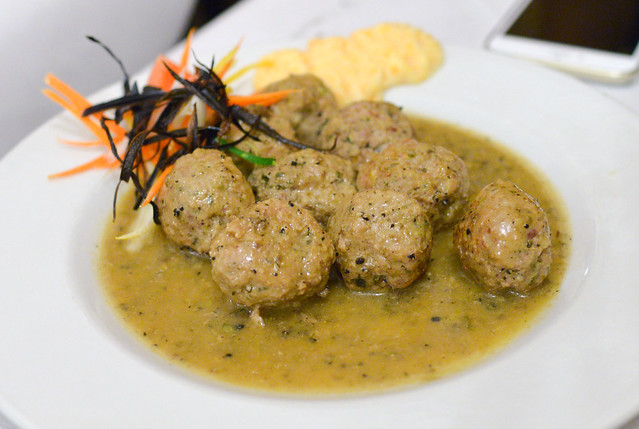 Bits of black truffle were apparent in the pork meatballs and the sauce. These were pretty tasty and hearty, balanced by lemon zest and slivers of fresh crunchy vegetables. 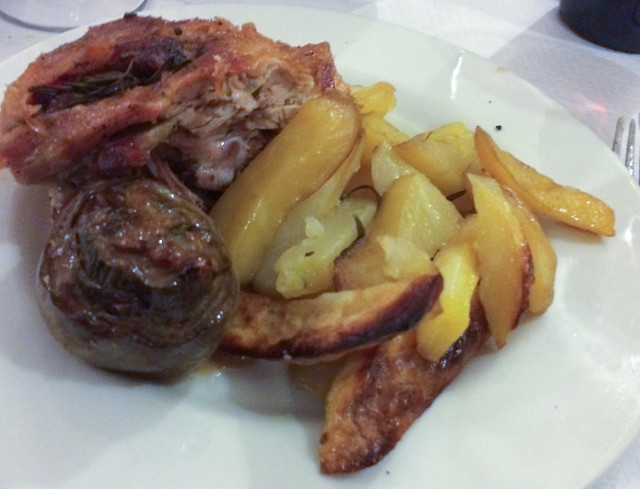 One of the larger plates, this featured a generous portion of lamb leg with potatoes. The lamb was pretty good, accented by a bunch of herbs, though the potatoes were a little limp and nothing to write home about.

Da Francesco put together the best meals I had in Italy and some of the best of the trip. The clear highlight were the truffled pastas, so good. However other items were strong too; roasted porcini mushrooms (unpictured) were so flavorful and buttery unlike anything I’ve had in the US. Highly recommended in Rome.