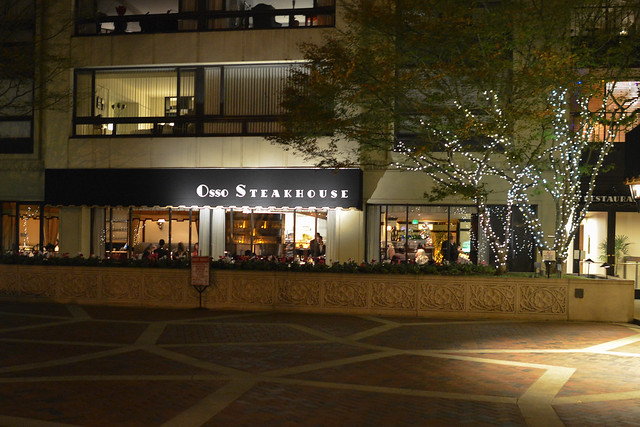 Each year, my dad takes my grandmother and my aunt out for an elaborate birthday dinner. This year, Osso Steakhouse was chosen as the spot. The restaurant opened earlier in 2013 by a restaurant group with a number of concepts around the Bay Area (probably most notable for The Stinking Rose) and has generally received favorable reviews since its opening. My parents had gone once last year and had a good meal, therefore they felt safe bringing a larger party here for this special occasion.

Osso specializes in dry-aged steaks featuring various sizes of filet, New York and porterhouse (a ribeye is curiously not on the menu). A large selection of seafood items, salads and traditional steakhouse sides round out the menu. Between our party of six, we were able to make a good dent into the menu. 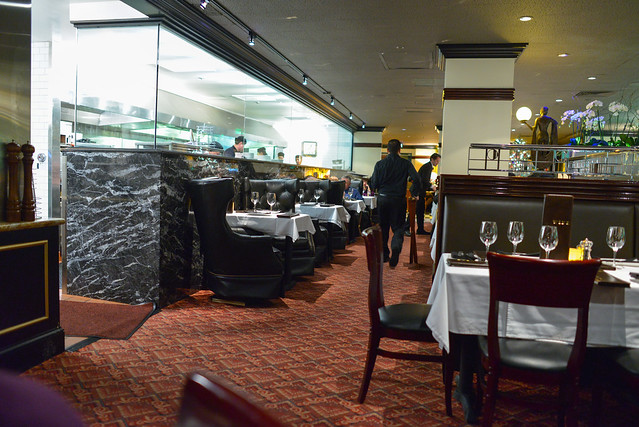 A bottle of sparkling started us off. 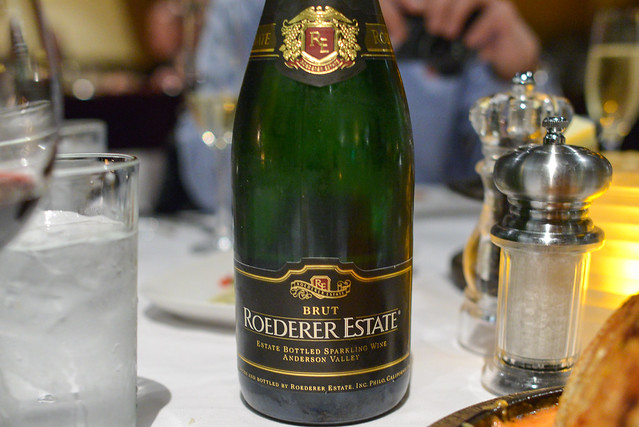 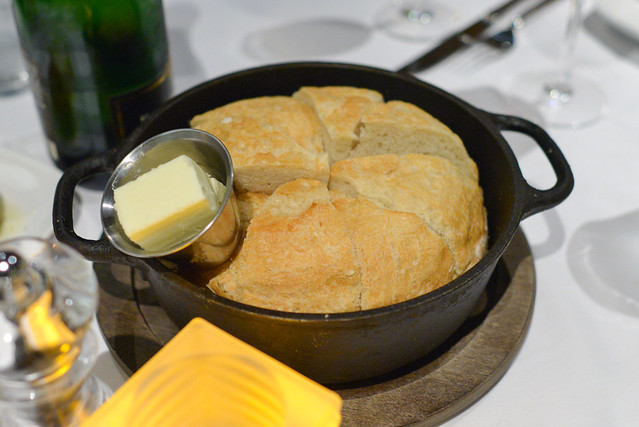 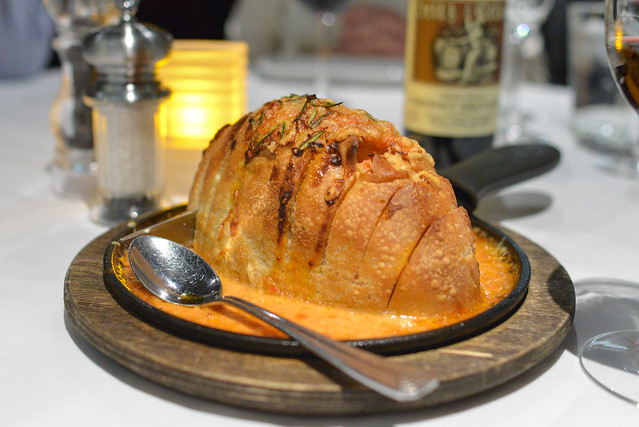 These might have been the same bread, just one with a chorizo-cheese. Obviously that one was the more popular choice at the table, with the oozing cheese and chorizo providing a bulk of great flavor for the bread to soak up. 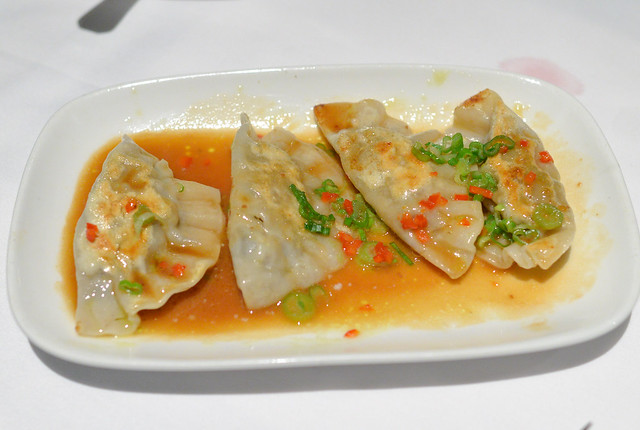 These had a nice chew with a meaty-mushroom mixture. 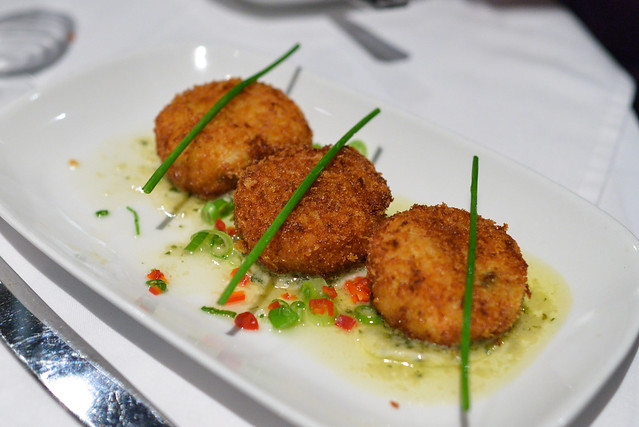 Crab cakes were standout, very crispy with plenty of sweet crab meat. A bright acidic sauce was an ideal accompaniment.

Appetizers done with, we broke open our bottle of wine and awaited our steaks. 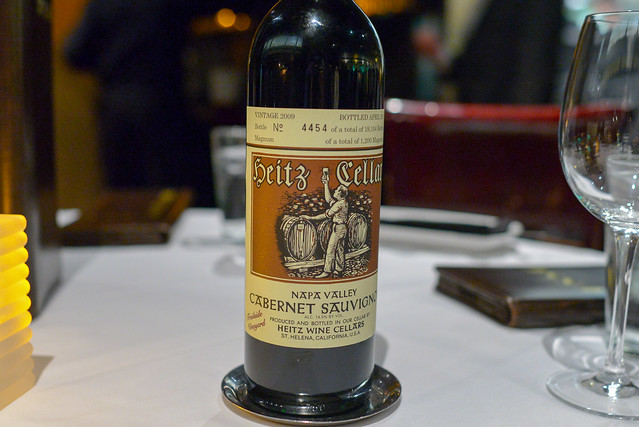 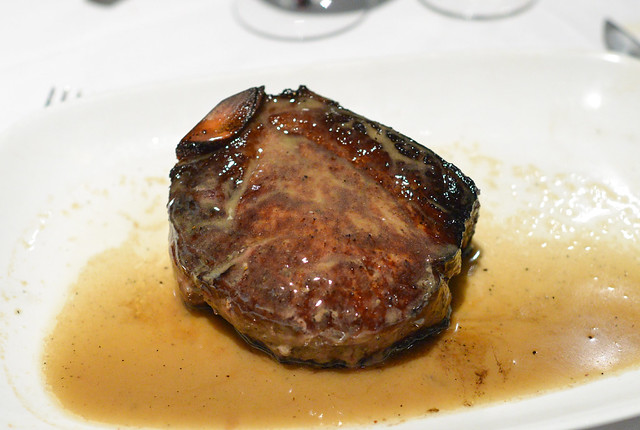 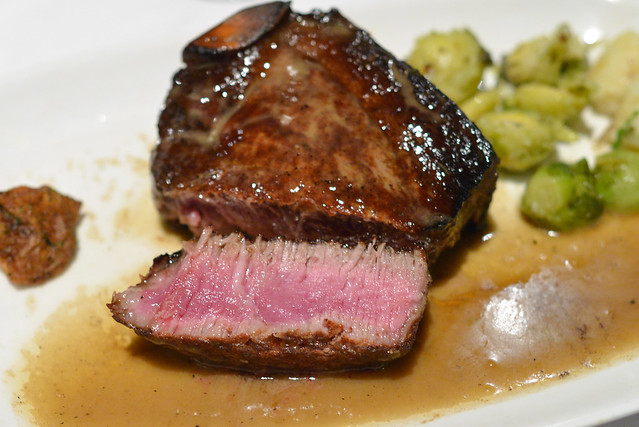 I ordered this large filet, a bone-in 16 ounces. Flavors were beefy and I really liked the crusty sear. However the sear might have been at the cost of a sharp gradient between well-done and rare in the middle of the steak. I would have preferred a little more finesse in the cooking with a larger, more even section of pink in the middle. 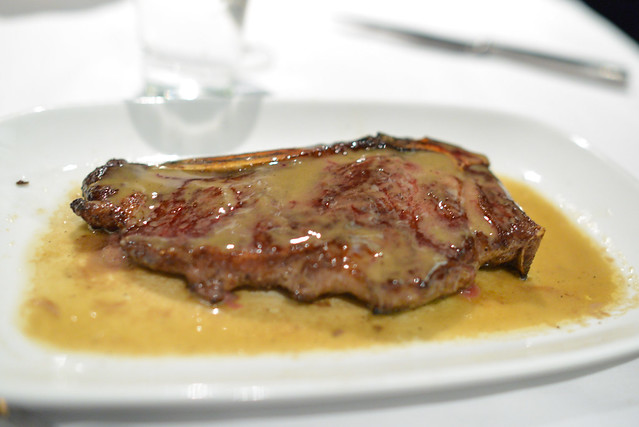 My mom went for the New York, one of the best-cooked and most flavorful steaks of the evening. 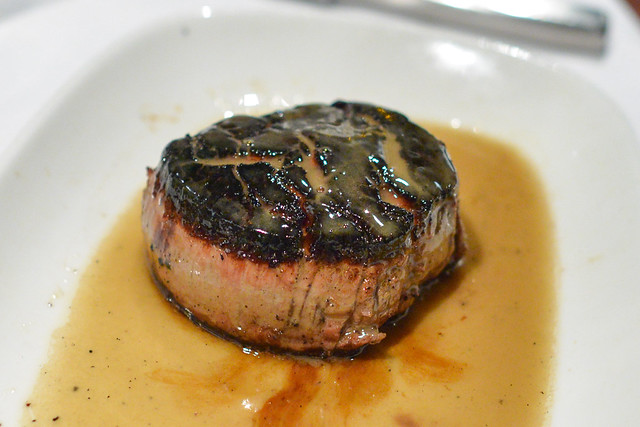 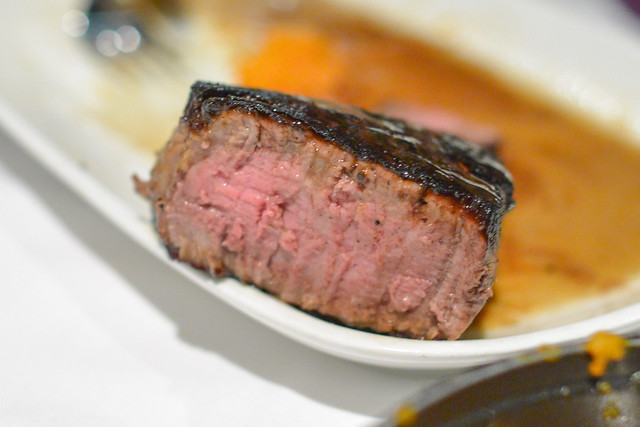 My aunt and grandmother each ordered the filet, with one of them coming out a nice medium-rare and one of them appearing medium-well (this one was ordered medium). The sear was fantastic, but again, there wasn’t a whole lot of consistency of doneness here. 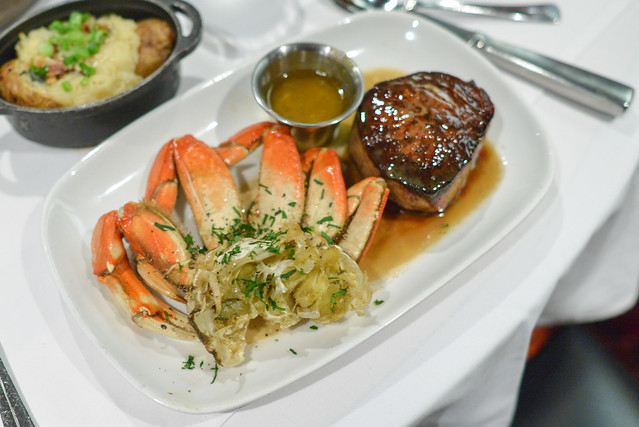 My dad went for the surf and turf; amazingly, it took the kitchen four tries to cook the filet (overcooked, then under, then still under). Four times. Not totally sure what happened here, but it was probably the most I’ve ever seen a steakhouse struggle in cooking a steak. We were just about all done with our steaks by the time my dad got to eating his. Definitely far from ideal. 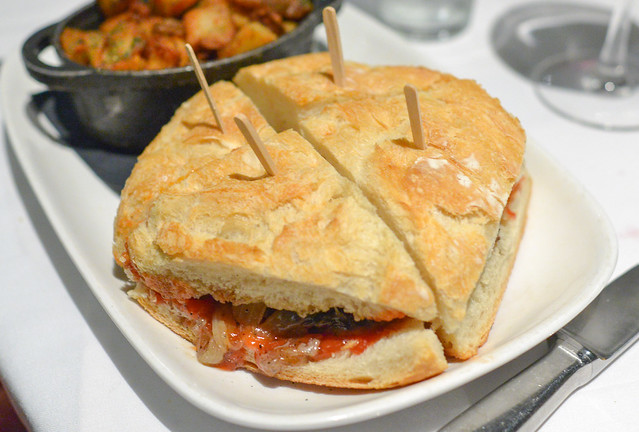 My brother got the the cheeseburger and may have regretted it upon seeing it. It was much too bready, perhaps being of the same bread we just had two loaves of. It also suffered from an overcooked (of course) beef patty. 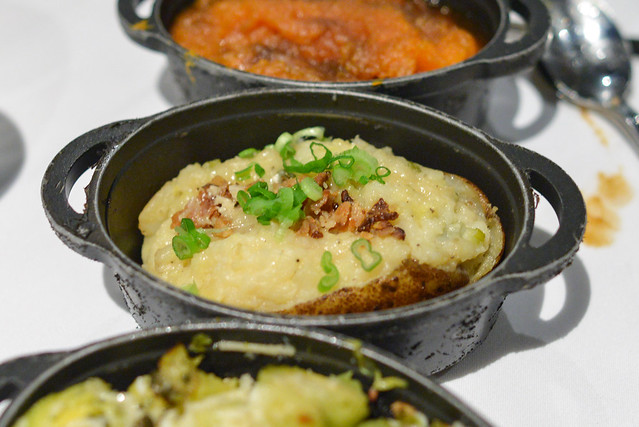 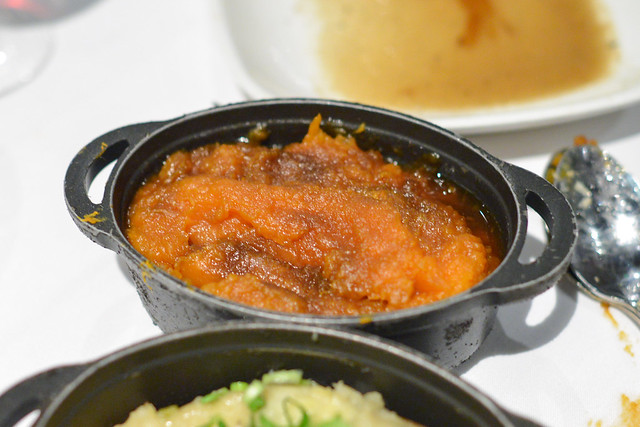 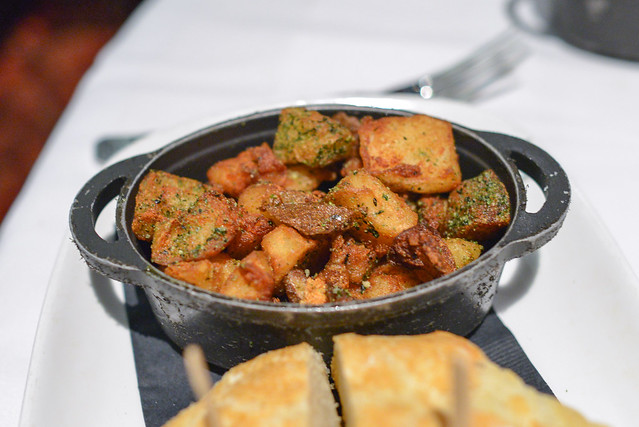 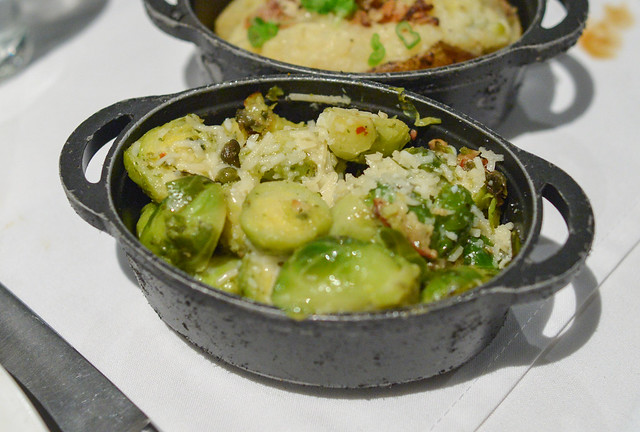 The sides were OK. Crispy roast potatoes were by far the best; the crispy spuds were both fluffy and well-seasoned. The yams and baked potato were fine, but nothing to write home about. The mushy Brussels sprouts suffered from a lack of caramelization. 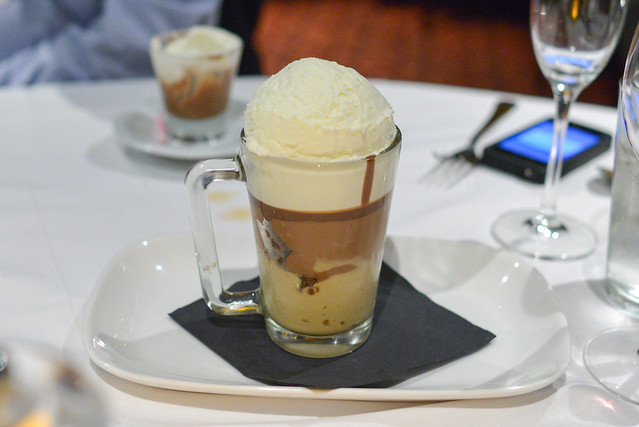 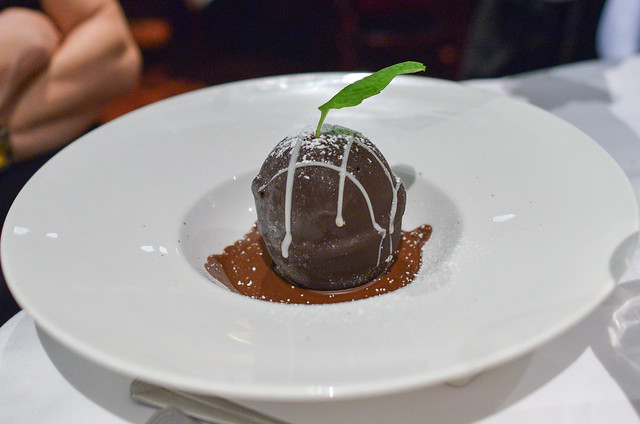 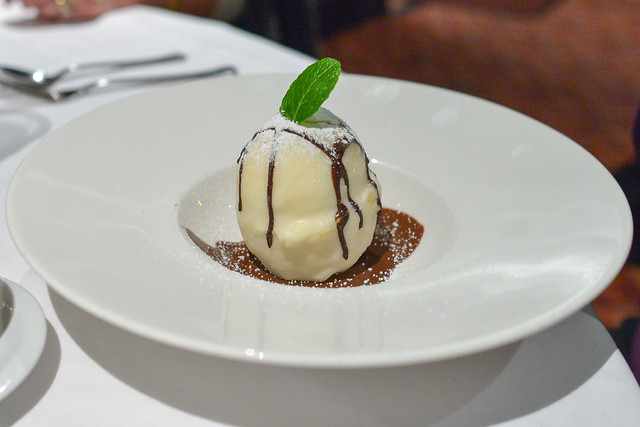 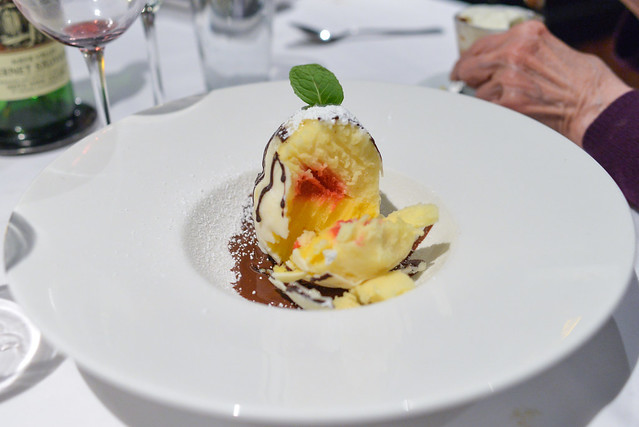 We ordered a couple of desserts and the kitchen gifted us the spumoni as compensation for the many attempts to cook the filet.

The meal at Osso Steakhouse started strong with the appetizers but really faltered after that. The quality of the beef was good, but Osso just couldn’t prepare a proper steak this particular evening. I was (and still am) surprised at how poor it was. And a properly prepared steak, of course, is one of the fundamental principles for any steakhouse. For what it’s worth, my parents did say their two steaks were cooked just right in the last visit. But after sharing this experience with others that had been, a couple did remark about similar experiences so this wasn’t an isolated issue. It was clearly a disappointing meal.