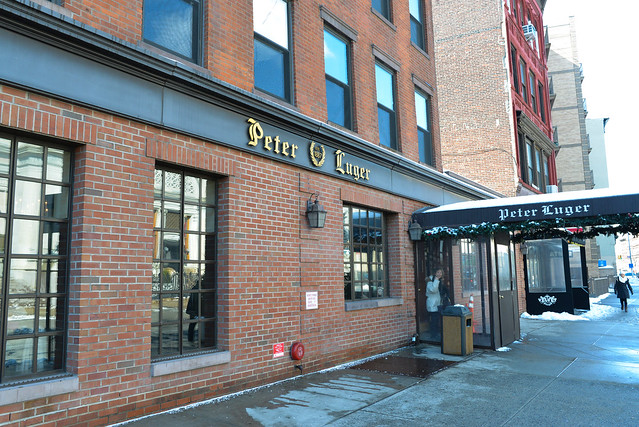 Peter Luger is perhaps the most famous steakhouse in the nation (and the world?), known for consistently serving top-notch steaks since 1887. Every single time I see a list of top steakhouses in the nation, Peter Luger seems to be at or near the top. I’ve always wondered if the restaurant was overrated, maybe finding its way to the top of lists due to a nostalgia factor. There is no doubt Luger’s been a pioneer in the field since opening, but surely restaurants have improved on the concept since 1887…right? Given my penchant for meat and potatoes, Luger’s been a must-try on my list and I was excited to finally try it. The restaurant currently holds one Michelin star.

A basket of bread and Luger’s special sauce were the first things to come to the table. 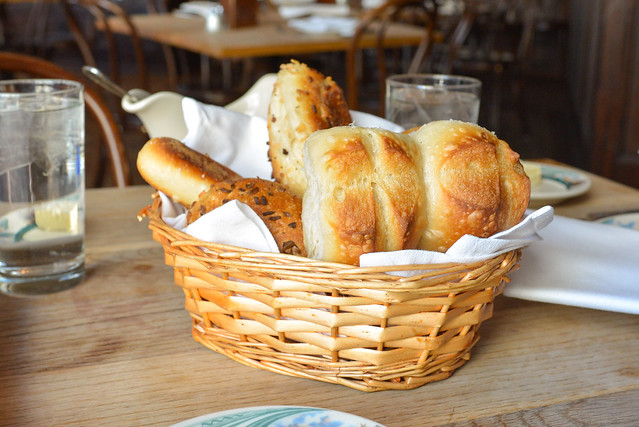 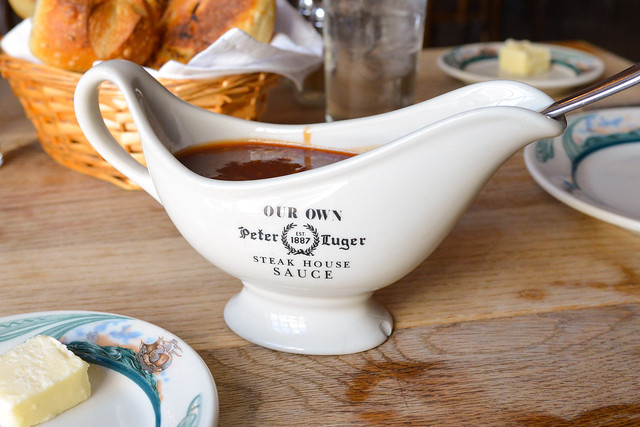 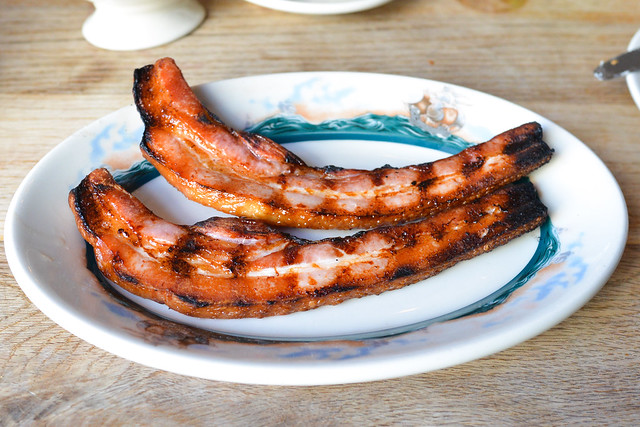 I’ve heard a lot about the bacon and it still managed to exceed expectations. The bacon was actually relatively lean, but still full of smoky porky flavor with a nice sear. My mom said it’s the best bacon she’s ever had, and I don’t think I disagree with her.

Luger Burger, USDA Prime Over 1/2 lb, on a Bun with French Fries and Cheese 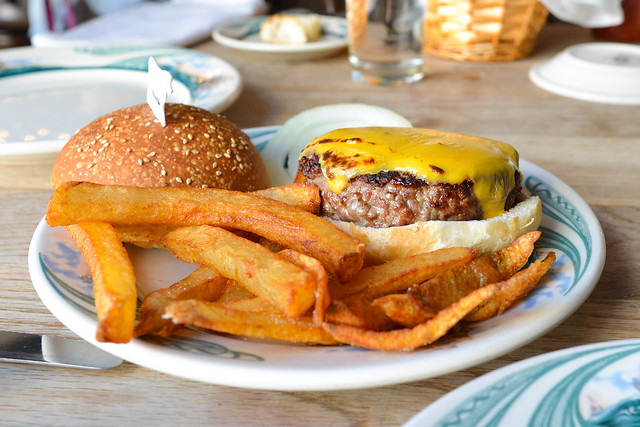 This was a lunch special that we got for good measure and to avoid having to get a steak for three. The patty was thick, cooked well, and almost ate like a steak (unsurprisingly). I probably wouldn’t opt for this instead of a steak, but it’s a viable option for anyone craving a burger. Pretty well-priced at $14 too. 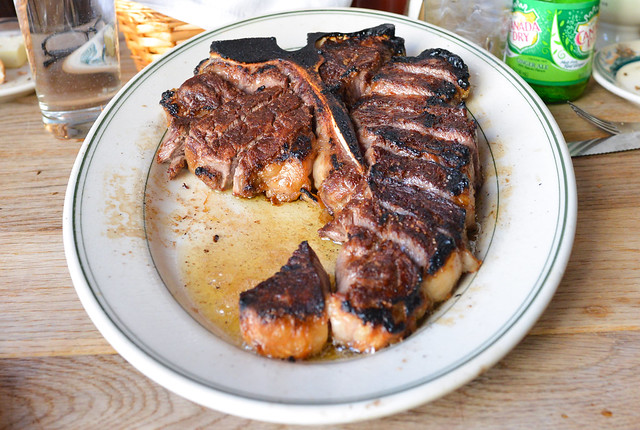 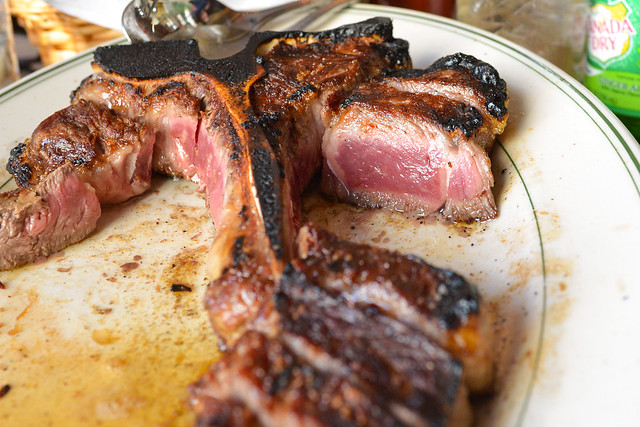 The pièce de résistance came to the table on a sizzling hot plate. Luger sears the porterhouse, then slices it off the bone before finishing in the broiler. The steak was on the rarer side of medium-rare for me, but showed off a very nice beefiness; both the filet and New York sides were pretty tender. The crusty sear was a difference-maker as well with a welcome texture contrast and plenty of flavor. If it had one drawback, it was that I didn’t think the steak was as juicy as other examples I’ve had, perhaps due to the unconventional method of slicing before the meat has had a chance to fully cook and rest. 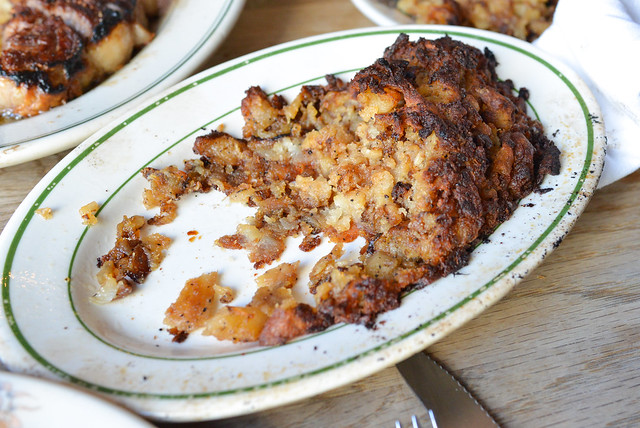 Potatoes were hearty with plenty of crispy bits. 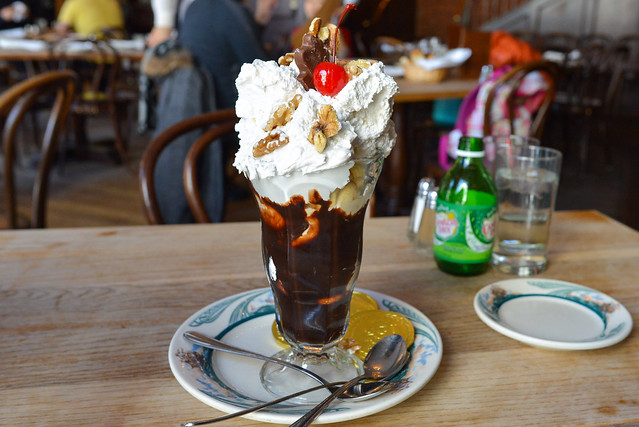 This sundae was simply done and rather enjoyable. Plenty of housemade schlag (whipped cream) made for some decadent bites.

Peter Luger didn’t disappoint, though it wasn’t mind-blowing (not that I expected it to be). Steaks were very good and service was actually better than expected (although we certainly observed some attitude towards other tables). This was a quintessential traditional steakhouse experience; I would return if I found myself in NYC craving a steak.