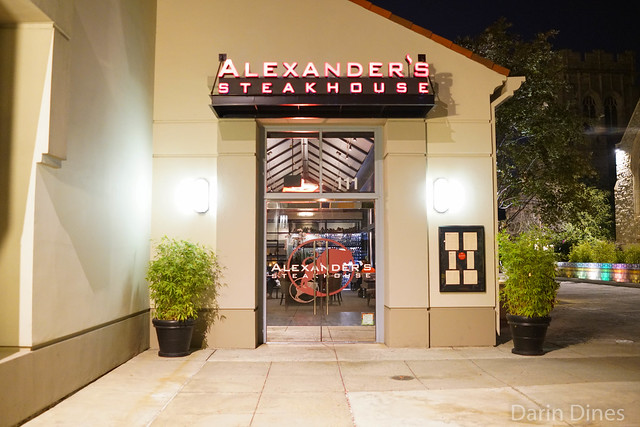 Alexander’s Steakhouse opened in Pasadena last year, the first SoCal location for the Bay Area-based chain. It’s a highly regarded steakhouse; the original Cupertino location garnered a Michelin star for three years (2011-2013). I’ve been to the San Francisco location once to celebrate a birthday, but this would be my first two visits to the Pasadena location.

The concept is a traditional steakhouse with a lot of Japanese influences. There’s plenty of beef options, domestic and international, with a full suite of appetizers, side dishes and other steak accompaniments. Dishes like an uni tamago and udon mac and cheese really show off the Japanese flair. 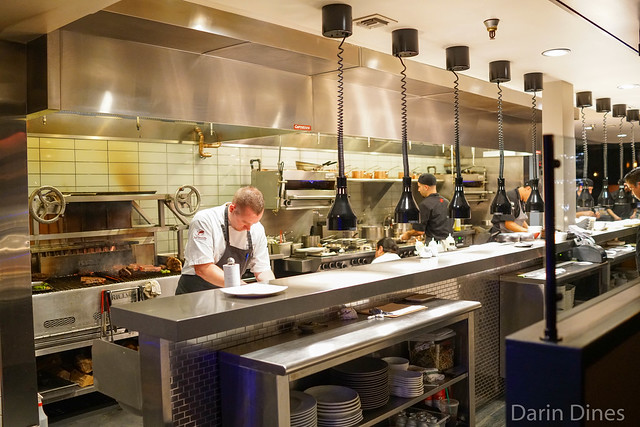 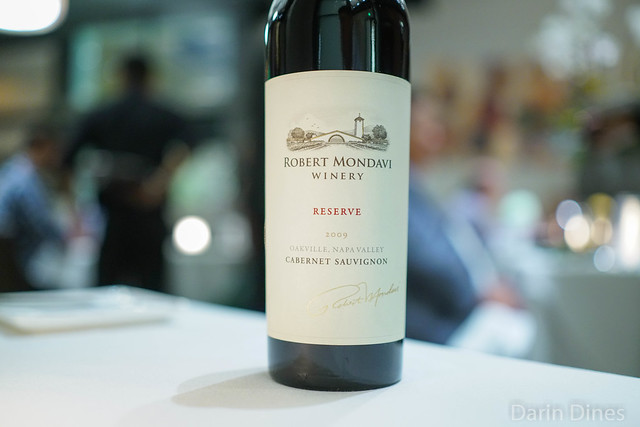 In anticipation of some great steak, we opened up a bottle of red wine. 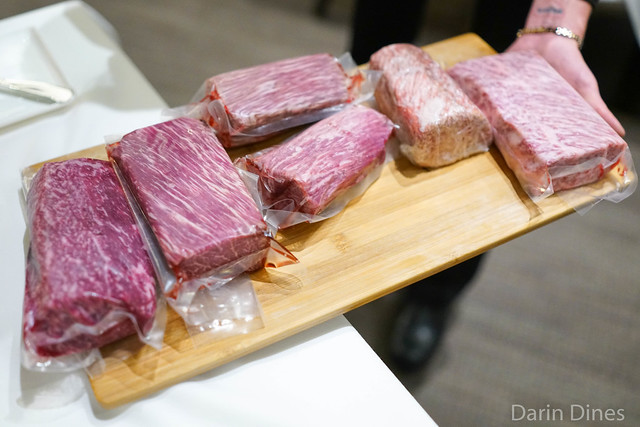 Alexander’s has one of the most impressive wagyu selections I’ve seen at an American steakhouse. Six different primal cuts were on offer from different regions – 4 Japanese, 1 Australian, and 1 American cross-breed. 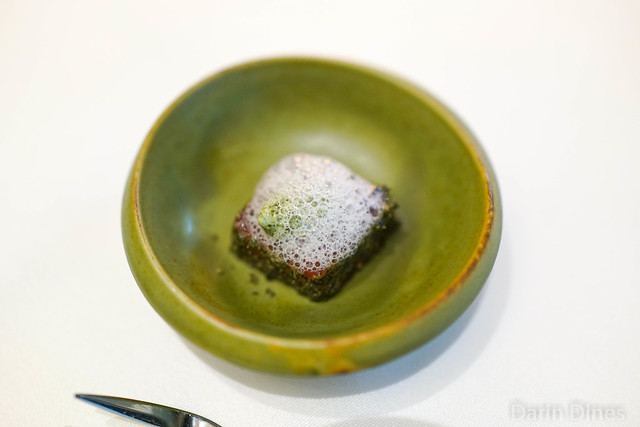 The amuse bouche resembled seared tuna but was actually watermelon dusted with a black sesame powder on its edges. The watermelon was a burst of fresh flavor while the black sesame provided an earthy, nutty counterpoint. 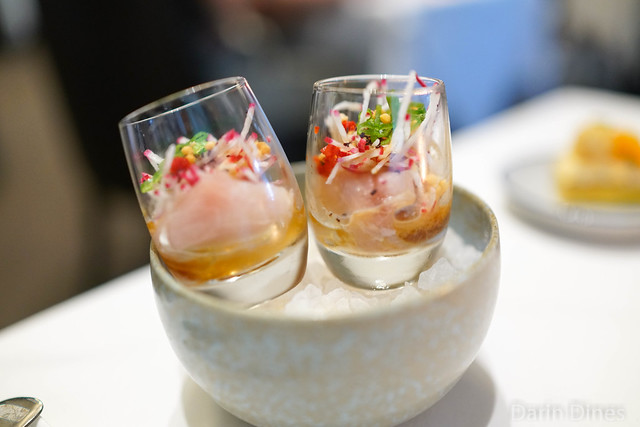 Signature shooters featured hamachi with bright flavors from the ponzu and chiles, while popped rice provided some crunch. 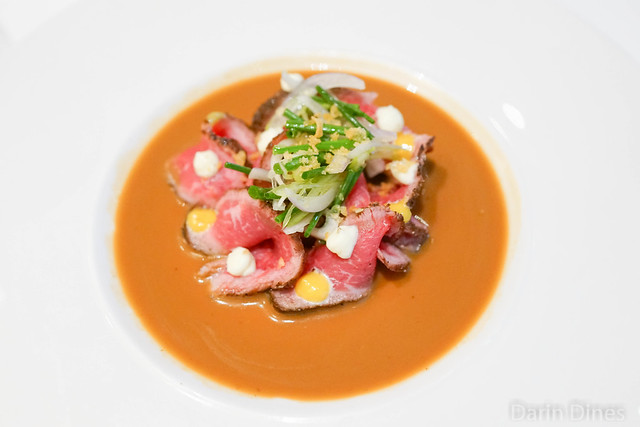 The strip loin tataki was bathed in this sweet, earthy miso with a bright onion salad. 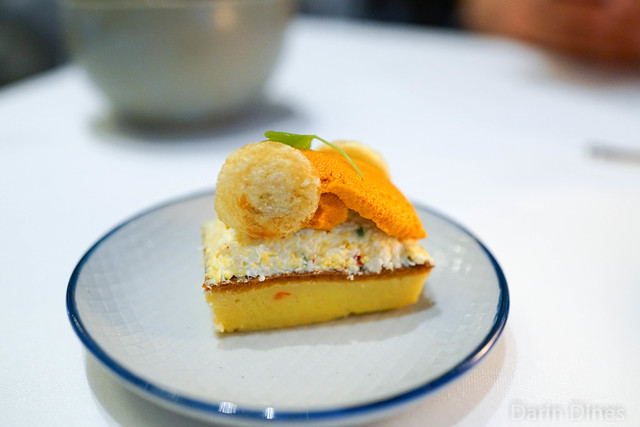 A sweet base of tamago egg custard was topped with creamy egg salad and fresh sea urchin. The egglicious dish delivered layers of egg flavor in a delicious mix. 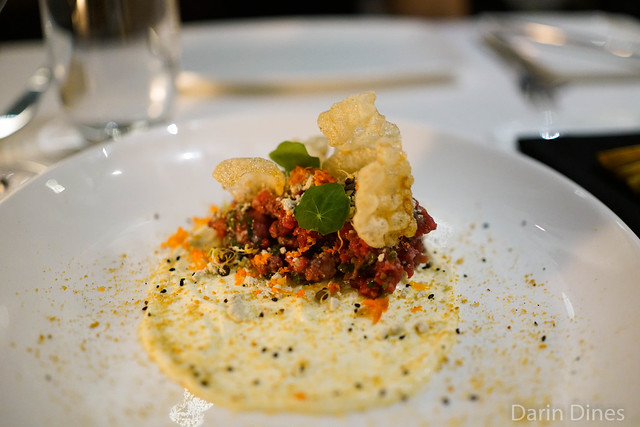 Beef tartare featured a distinct beefy flavor well-balanced by the acid. Buttered and toasted crostini, as well as fried beef tendons, were great vehicles with which to eat the tartare with. 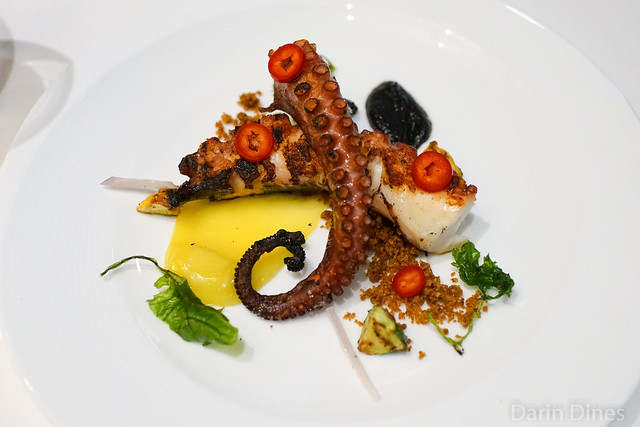 I found the octopus to be cooked well, but the accompanying ingredients just didn’t provide that much flavor. 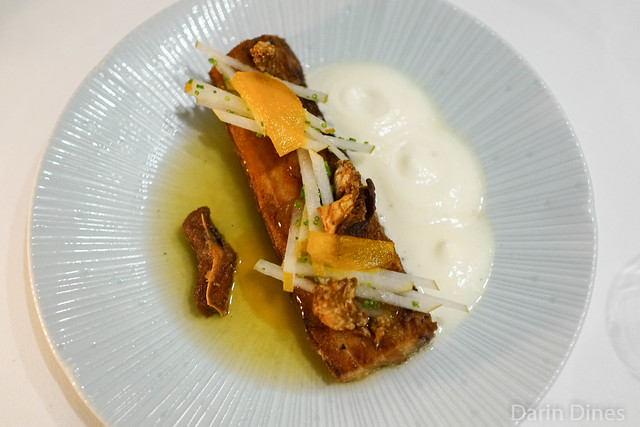 This pork belly appetizer was a substantial portion. The belly was very tender, very rich and slightly sweet countered by the fresh fruit and pear espuma. 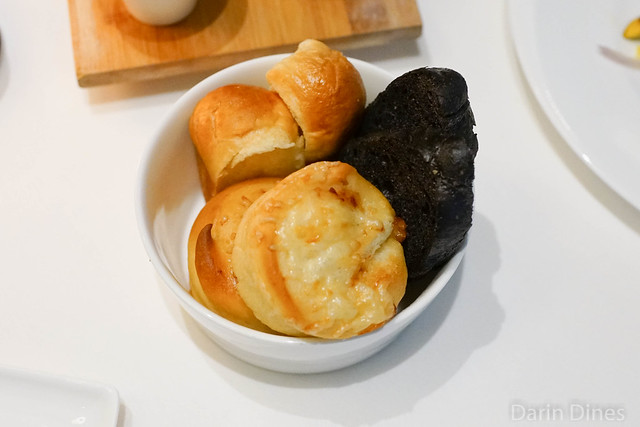 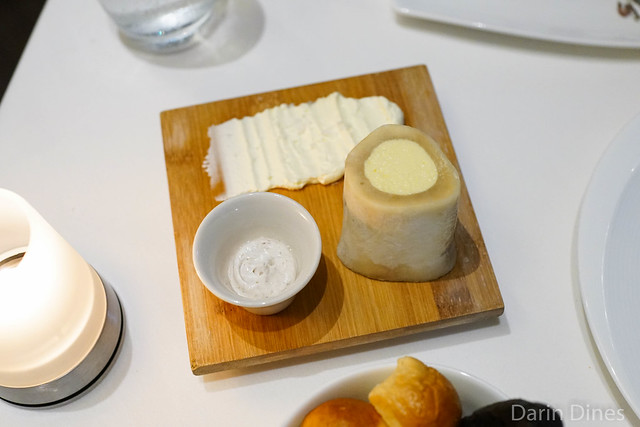 Bread service was pretty great featuring three different breads and three butters/fats including one made from beef drippings (!). 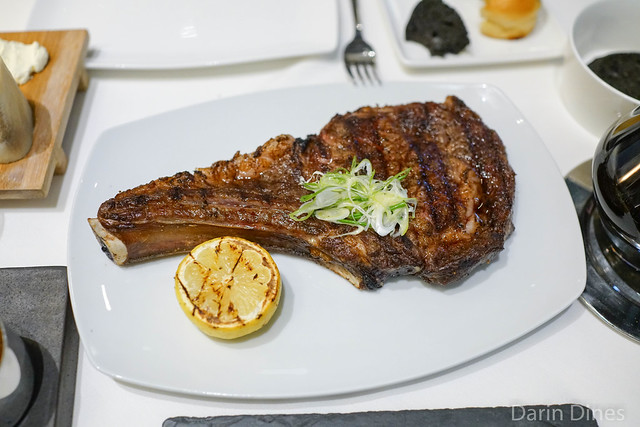 This large bone-in angus was excellent, fully of juicy beefy flavor. There was a nice sear to this cut, lending a little bit of smoky flavor to the meat. 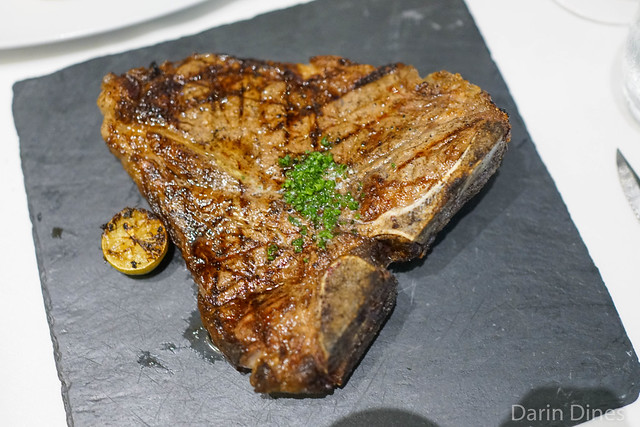 This dry aged t-bone also had a great beefy flavor on the sirloin section, though not noticeably different from the ‘regular’ ribeye. The filet portion was a nice size and was as tender as expected. 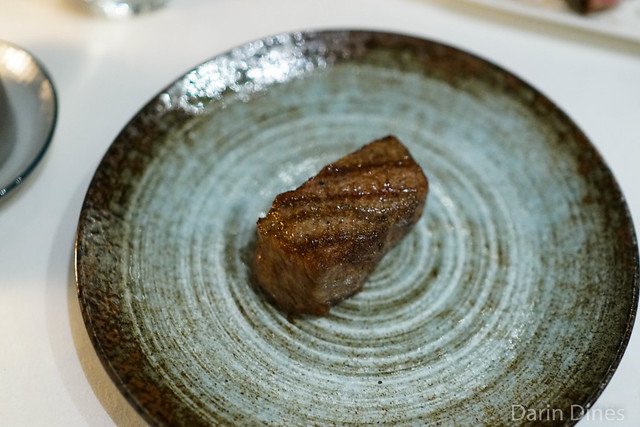 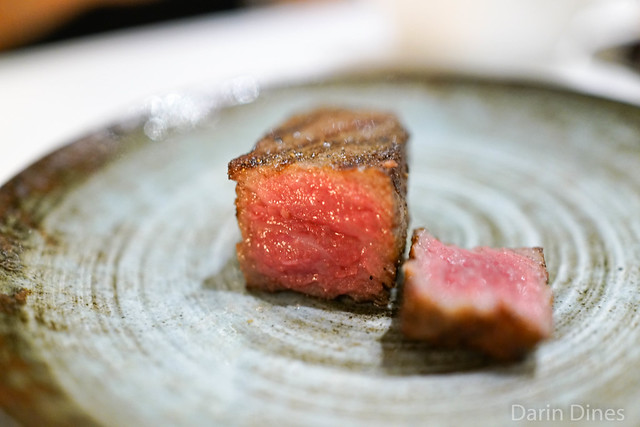 These three ounces of wagyu were pure lusciousness. Exceedingly tender and rich while still exhibiting a really nice beefy flavor, these were some excellent bites. 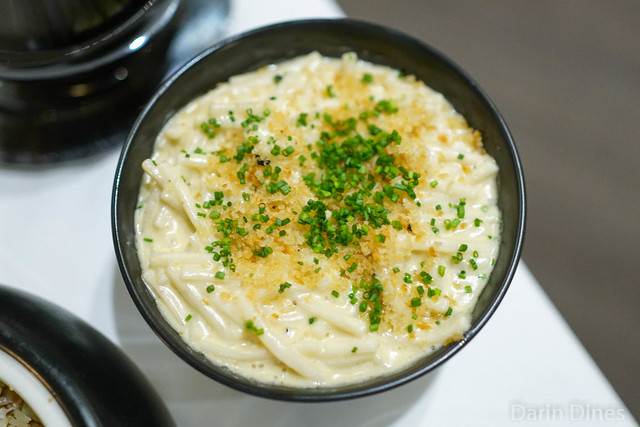 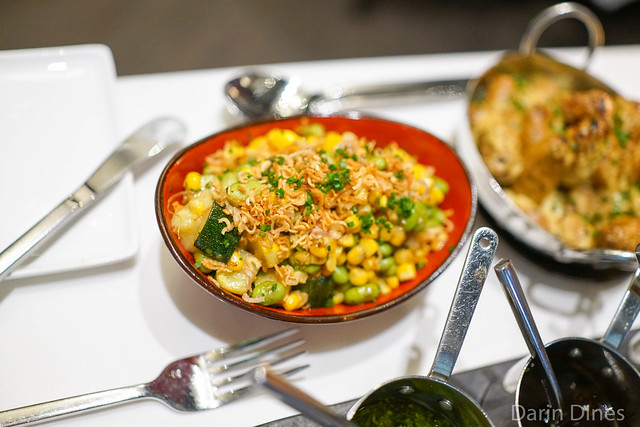 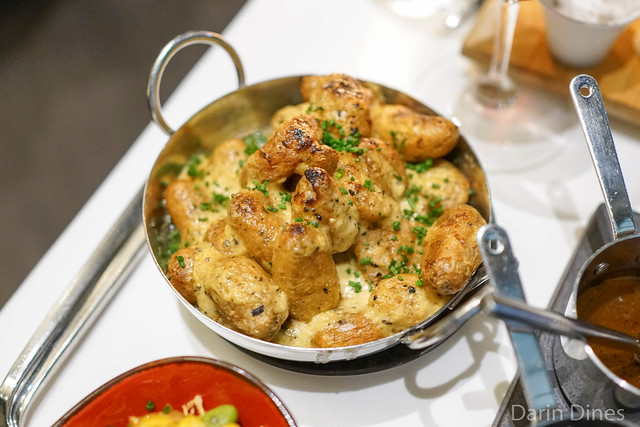 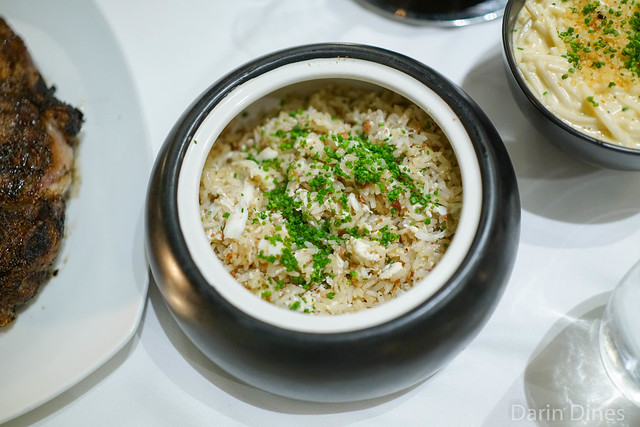 Side dishes were up and down. The succotash was good, featuring the sweet Brentwood corn with diced squash, eggplant and edamame. I expected the fried potatoes to be crispy, but they were disappointingly soft and without distinguishable truffle flavor. The fried rice was a very strong version with sweet king crab scattered throughout. However, the mac and cheese, with udon as the ‘mac’, was disappointingly soft and a bit mushy bathed in the milky sauce. 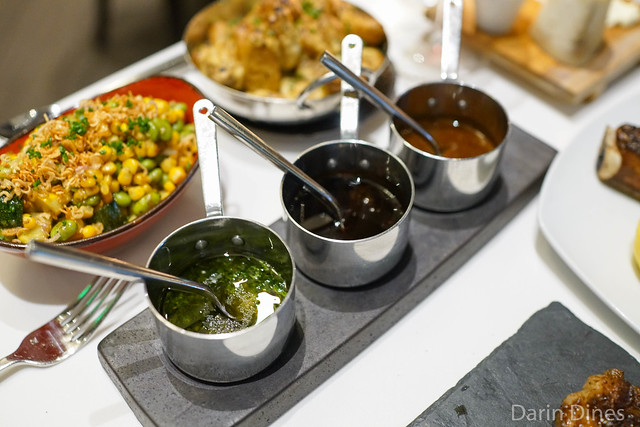 Sauces weren’t necessary but we tried a few anyway. These were all pretty good with my favorite being the rich bordelaise. 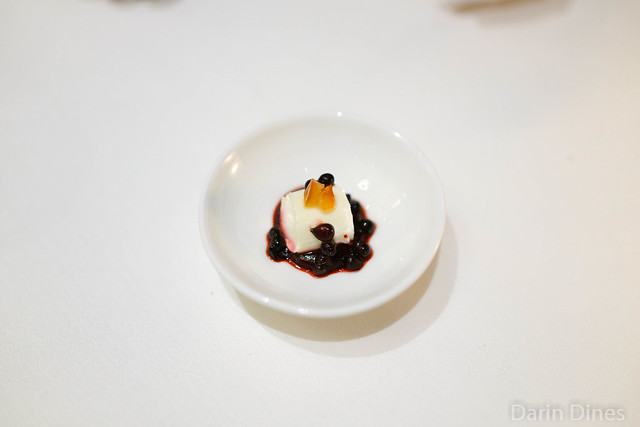 A dessert intermezzo cleansed the palate with this fruit-forward dessert. 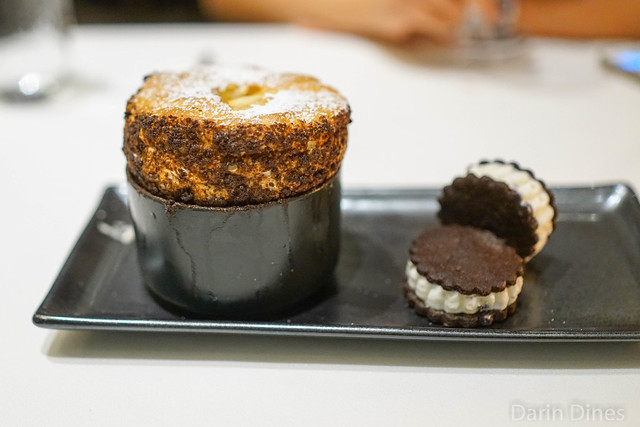 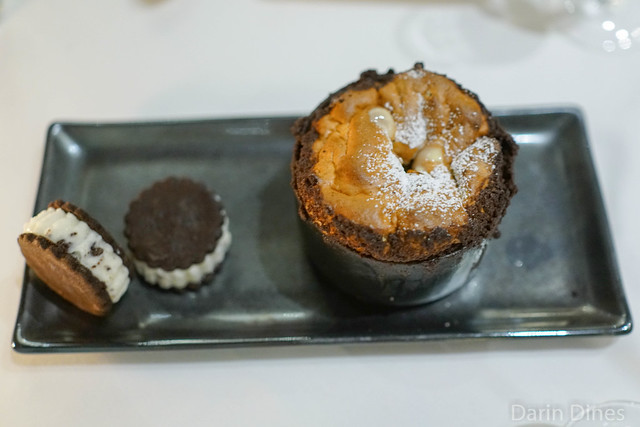 The cookies and cream soufflé was light and airy with this vanilla creme anglais. Ice cream sandwiches alongside were a welcome treat. 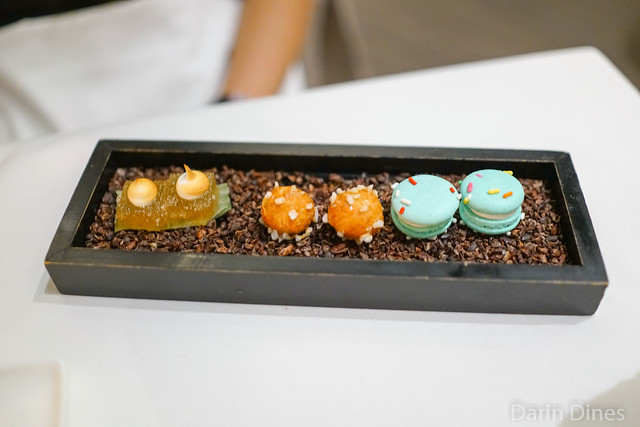 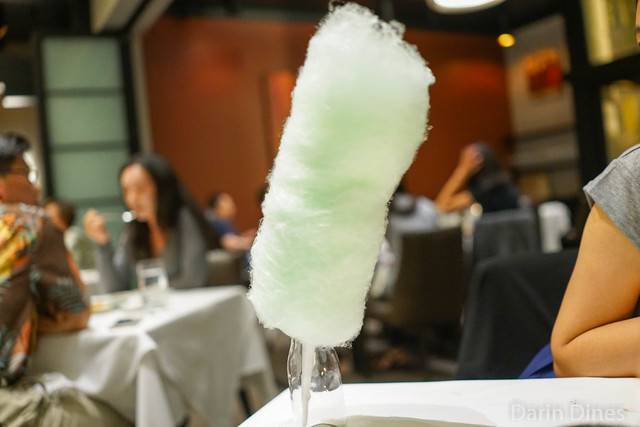 We had a couple of very good meals at Alexander’s Steakhouse. The beef was certainly top quality and right at the top of steakhouses in the city. However I found the appetizers and sides to be a little hit-or-miss; the meals weren’t as strong as they could’ve been from start to finish. I would return, but I know to be pretty choosy on the non-steak dishes.